QLED vs. OLED: Which Is Better in Bright Rooms? 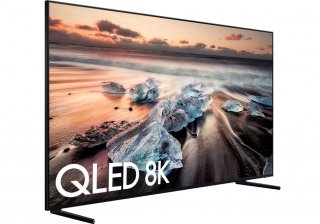 Some rooms are just naturally bright, and there are indeed instances when you want to enjoy a movie during the daytime.

In such an environment where the room can’t get completely dark, depending on the kind of HDTV you have, your movie experience could suffer greatly.

Today, the consumer basically has two options for high-end HDTVs—QLEDs and OLEDs. Sure, we’ve all heard about the rave reviews regarding OLED TVs’ unrivaled picture quality and perfect black levels, but if your room has a lot of ambient lighting, perhaps these panels shouldn’t be your first choice.

QLEDs, on the other hand, can really jack up their brightness levels, which give them a noticeable advantage in brighter rooms over their OLED counterparts. Much of the reason is the technology utilized in QLED panels. These sets, made popular by Samsung, are basically an LCD TV with quantum dots—microscopic particles that when hit by light, emit a certain different colored light. The source of this light is the LED backlight, and that light must pass through more layers, such as the LCD layer, to produce the images on the screen.

In improving QLED TVs, Samsung has created a new refined aluminum compound that can make the quantum dots more efficient, and the natural ability to produce more accurate colors. This technology replaces the red, green and blue color filters that many of the older TVs used.

Because of their powerful backlighting, QLED panels are exceptional in generating incredibly bright light that can also help with annoying glares and reflections. Most of Samsung’s QLED TVs can produce anywhere between 1,000 and 2,000 nits of brightness, hence the highly regarded brilliant whites. Just for comparison, you need at least 600 to 700 nits to produce HDR images.

OLED panels, however, just can’t reach that level of brightness because they use self-emissive pixels, which don’t need any backlighting. When electricity passes through these pixels, which number in the millions in these TVs, they light up in different colors. The advantage is that OLED pixels can remain completely dark to produce deeper true blacks.

OLED TVs also use additional white light to manufacture even more varied colors, which make for images that are more diverse, richer and more accurate. Moreover, keep in mind that OLED TVs can be designed slimmer and are more environmentally friendly because they use less energy than the competition that depends on backlighting.

Despite the advantages in overall picture quality and wide-angle viewing, OLED panels just don’t look as sharp as QLEDs in rooms with plenty of ambient lighting. While Samsung may have won this small battle, the Korean tech giant isn’t done innovating.

The company has committed $11 billion over the next five years on a new factory in Asan, South Chungcheong Province, that will focus chiefly on QD-OLED hybrids, which aim to cull the best qualities of the two high-end panel technologies.

The other new tech from Samsung and others is MicroLED that boasts many of the same picture-quality strengths as the QD-OLED hybrid but with no danger of burn-in. MicroLEDs seek to tap into next-gen emissive LED tech that makes use of miniaturized LEDs.