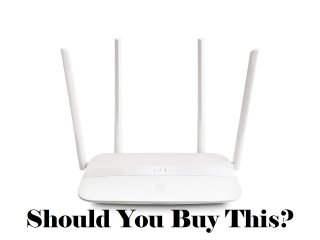 It really is a conundrum. The U.S. is restricting Huawei’s access to 5G, but the Chinese company can still sell its routers here.

That’s because once a device is deployed in Wi-Fi, it apparently can’t be forcibly recalled due to security reasons. You really don’t have to look hard, either, as you can find Huawei routers for purchase on Amazon and Walmart.

Huawei is also flexing its muscles in next-gen Wi-Fi 6, which only came out last year. In fact, the Texas-based Wi-Fi Alliance recently honored Huawei for its leadership role in the Wi-Fi Certified program. Now Huawei’s various devices will boast the Wi-Fi Certified seal.

What should be noted is that there are many companies owned and affiliated with the Chinese government that are among the 800 members of the Wi-Fi Alliance. Moreover, they are listed in the U.S. National Vulnerabilities Database, restricting their use in the federal government.

The Wi-Fi industry plans to deploy hundreds of millions of connected devices in the 6 GHz band. But questions have been raised if Huawei’s routers should have mostly wide-open access to spectrum that is often used by providers of critical infrastructure services, such as those in utilities, transportation and public safety.

China’s continued success in building the 5G infrastructure at home, mostly with local telecom vendors Huawei and ZTE, is expected to improve its burgeoning tech industry’s bargaining power with foreign patent holders. Such a development could help drive costs lower for telecoms gear makers and chip companies. Beijing is also trying to pressure other countries to allow Chinese companies to build their critical 5G network infrastructures.

The Trump administration, however, has made those lofty 5G ambitions more difficult for China to achieve. Last May, the U.S. added Huawei to a trade blacklist, which restricts the company from buying hardware and software from American tech suppliers. Washington has maintained the stance that the company’s gear could be used by Beijing for espionage purposes and to steal intellectual property. Meantime, Huawei has repeatedly denied that it is controlled by the Chinese government.

More recently, U.S. lawmakers introduced legislation to financially boost the country’s 5G wireless technologies in an effort to combat the influence of Chinese telecom groups on 5G infrastructure. Known as the USA Telecommunications Act, it will set aside about $750 million in a development fund for future ventures in 5G.

“The USA Telecommunications Act of 2020 will encourage more competition in the network equipment market and help lower costs for trusted equipment over the long term,” the sponsors said in a joint statement. “By promoting a more competitive market of trusted alternatives to suspect 5G equipment, we can more easily secure our critical networks and bring like-minded countries with us.”

Ethen Kim Lieser is a Tech Editor who has held posts at Google, The Korea Herald, Lincoln Journal Star, AsianWeek and Arirang TV. He lives in Minneapolis.