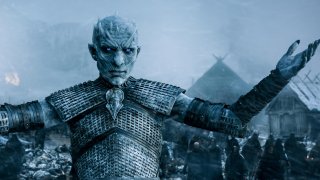 "Game of Thrones" wrapped up its long eight-season HBO run just over a year ago, with a final season that got longtime fans of the show talking, and mostly not in a good way.

Fans looking to revisit the series, or catch up on it for the first time, can stream all of the seasons on HBO, or any of its streaming offshoots, including HBO Max. But now, those looking for a physical copy of the series will have another option.

The Digital Bits appeared to be the first to notice that Best Buy had temporarily posted a listing for Game of Thrones: The Complete Series 4K Ultra HD box set, complete with Digital Copy codes. The Best Buy listing was taken down, but then Amazon posted the official preorder page. A German website called 4Kfilme.de had also noticed the Best Buy listing.

Previously, only the first and last seasons of “Game of Thrones” had been available on 4K Blu-ray.

"Summers span decades. Winters can last a lifetime. And the struggle for the Iron Throne begins," the promotional copy says. "Based on the bestselling book series by George R.R. Martin and created by David Benioff and D.B. Weiss, Game of Thrones: The Complete Collection is available to watch in stunning 4K UHD for the first time." The copy also promises over 15 hours of bonus footage.

The 4K edition will likely be another Game of Thrones-related project that beats "The Winds of Winter," Martin's next book in the "A Song of Ice and Fire" series, to the market.

In a recent blog post, Martin stated that "OF COURSE I am still working on WINDS OF WINTER as well.   That really should go without saying, yet somehow I need to say it, or someone might make stupid assumptions."