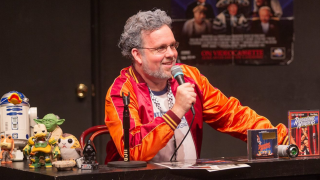 There have been some spectacularly bad talk-show hosts. Chevy Chase epically bombed on his own show on Fox back in 1993. And who can forget tennis star John McEnroe’s short stint hosting a talk show on CNBC 16 years ago?

Actually, everyone forgot that show pretty much immediately.

Comedian Connor Ratliff could imagine worse. In 2014 he trimmed his beard, flattened his affect, threw on the most casual lumberjack-style clothes in his closet and shuffled onto stage at the Upright Citizens Brigade Theater in New York City, playing Star Wars-creator George Lucas if Lucas had his own talk show.

The results are … weird. And very very funny. The George Lucas Talk Show continued into 2020 and even spawned an outrageous spin-off (more on that later) before the covid-19 pandemic temporarily shut down everything.

Loosely mimicking the famously uncharismatic Lucas, Ratliff delivers a profoundly bad monologue then interviews comedians, actors and musicians while -- in the early episodes, at least -- his sidekick Jar Jar Binks, a human version of the racist CGI character from Lucas’s The Phantom Menace, chortles on the couch.

The jokes are awkward. The banter is stilted. The guests visibly are uncomfortable. The whole fictional show is badly-conceived, poorly-executed and borderline unwatchable. Like a Star Wars-themed Between Two Ferns.

And that’s what’s so funny about it. “The bit was, Geore Lucas is the least charismatic man of all time trying his hardest to succeed in a format that’s based solely on personality,” Griffin Newman, a frequent guest on the show, explained on The Flophouse podcast.

When Shaun Diston, the actor who played the talk show’s version of Jar Jar Binks, moved to Los Angeles, Newman took over as sidekick. Newman plays a different racist CGI creation of Lucas’s -- Watto, a thinly-veiled Jewish stereotype from The Phantom Menace.

In March 2020 Newman’s Watto took over the UCB stage to perform a bizarre one-alien musical review. It was one of UCB’s last comedy acts before the theater suspended operations amid the pandemic.

Ratliff, who in 2020 is best known for his autobiographical podcast about getting fired by Tom Hanks, doesn’t try too hard to mimic Lucas’s lumberjack appearance or his mousy intonation. Instead, he wisely captures Lucas’s solipsism and general cluelessness about the culture in which his creations play such an outsize role.

All of the faux-Lucas’s monologue jokes are about Lucas’s own movies. “There’s been another earthquake out it California,” he jokes in episode two. “Or, as Howard the Duck might refer to them, earth-quacks.”

It doesn’t matter who the guest is or what they’re talking about, Ratliff-as-Lucas will steer the conversation back to Star Wars, Indiana Jones, Howard the Duck, American Graffiti, Willow or The Radioland Murders.

In episode one, writer Tami Sagher tries in vain to talk about her experiences working on the T.V. show How I Met Your Mother. But Ratliff’s Lucas brushes her off. He’s suing How I Met Your Mother, he says, because it illegally copies the plots of the Star Wars prequel trilogy. “It’s about how Anakin Skywalker met Luke’s mother.”

It’s not funny. It’s not supposed to be. And that’s what’s so funny about it. Follow The George Lucas Talk Show on Facebook and watch old episodes on Vimeo.