It Could Cause Damage: Apple Warns Against Closing MacBooks with Camera Covered 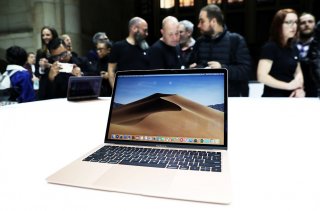 Many users of laptop computers, seeking to guard against various forms of surveillance, make a habit of covering up the camera on their computer.

Now, Apple is warning MacBook owners not to close their computers with a display cover on.

“Closing your Mac notebook with a camera cover on it might damage your display. Designed to protect your privacy, Mac notebooks have a camera indicator light to let you know when the camera is on,” an Apple support website stated last week.

“If you close your Mac notebook with a camera cover installed, you might damage your display because the clearance between the display and keyboard is designed to very tight tolerances,” the note added. “Covering the built-in camera might also interfere with the ambient light sensor and prevent features like automatic brightness and True Tone from working.”

MacBook users are asked, instead, to trust the green light, which is on when the camera is active, and not on when it’s not. Apple also promises that “the camera is engineered so that it can’t activate without the camera indicator light also turning on,” thus reassuring customers that they’re not being spied on in their everyday camera usage.

Apple announced at its WWDC virtual event last month that it is dropping Intel chips, which it had been using since 2005, and will instead switch to their own chips, which are known as “Apple Silicon.”

Back in April, the opening weeks of the coronavirus shutdowns led to a sudden demand for webcams, a product long thought to be all-but-obsolete. The sudden ubiquity of Zoom meetings led many users to suddenly place a premium on high-quality video images, which led to shortages at several major outlets. The sales of webcam, in fact, had doubled in the first quarter compared to the same period the year before.