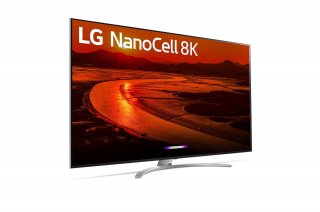 We may not be fully there yet, but LG’s NanoCell 99 Series 8K TV offers a timely preview of what’s to come in the burgeoning 8K TV universe.

And you will not be disappointed. Sure, this 75-inch beast will set you back $5,000, but that reason alone shouldn’t make you put your car in reverse and scurry off. What we need to understand about the price is that we are still in the early innings of 8K TV technology, and after a few years, the price tag should be down to what we see for 4K TVs today, maybe even lower.

What the 99 Series is really giving us is a glimpse of the future — and it looks fantastic. This particular offering by LG features an enhanced next-gen LCD display technology called NanoCell.

In terms of picture quality, LG’s 99 Series doesn’t take a backseat to anyone, except for perhaps the company’s own OLED TVs.

The picture is sharp and vibrant via its full-array LED backlight with local dimming. This tech aims to divide the backlighting into small sections for more precise color control and contrast and truer black levels. An 8K TV should provide four times the resolution of 4K, according to LG.

What really separates itself from competitors is that it has amazing wide-viewing angles, so if you have seating arrangements that wrap around the TV, you’ll surely notice the difference.

An intriguing feature of the 99 Series is its processor — the Alpha 9 Gen 3 AI Processor 8K. It is the exact same hardware that can be found in LG’s 2020 OLED TVs, which the Korean tech company said uses “deep learning technology” to provide an outstanding 8K viewing experience.

Moreover, LG announced that the 99 Series 8K model surpassed the Consumer Technology Association’s requirements for 8K TVs, allowing it to join LG’s 2020 ZX Series in being among the first models to earn the CTA 8K Ultra HD logo.

The 99 Series also supports Dolby Atmos and all major HDR formats, including Dolby Vision and HDR 10. And if you’re into voice assistants, you in luck, as both Google Assistant and Amazon Alexa are conveniently built-in. The TV relies on the webOS Smart TV platform, and support for AirPlay2 and HomeKit is included as well.