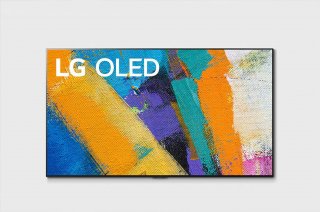 LG Electronics this week announced the arrival of a new sound bar, which is meant to aesthetically match its GX Gallery line of OLED TVs.

The LG GX sound bar, which offers 3.1 channels, along with Dolby Atmos and DTX:S capability, and is Hi-Res Audio-certified. It’s priced at $999.

The new sound bar is 6 inches high by 57 inches wide by 1-1/4 inches deep, which is meant to match the size and look of the 65-inch LG GX Gallery series OLED TV.

The speaker, LG says, supports both Dolby Vision and 4K pass-through, while its subwoofer “connects wirelessly to the sound bar to deliver low-frequency bass from anywhere in the room.”

What Hi-Fi, in their review, described the 65-inch GX as “a beautiful TV that improves on its predecessors in a few key areas.”

Digital Trends calls the GX series “simply gorgeous,” while praising its stunning design, picture quality, HDR/contrast, and “Improved user experience,” while quibbling only with the price and lack of an included stand.

“LG’s Gallery Series GX OLED begs a premium, but the added investment is returned in the form of gorgeous design, a slick wall mount system, and improved user experience,” the review said. “Toss in LG’s outstanding OLED picture quality, and you have one astounding TV.”

RTINGS.com has not yet reviewed the GX series, although the six highest-rated TVs in its current 4K rankings are all LG OLED TVs, including the CX series from this year.

Several of those reviews have mentioned that the competition is getting stiffer in the OLED TV market, with Sony and other manufacturers rolling out their own OLED models in the last couple of years.