Movie about the Khashoggi Assassination, The Dissident, Is Target of Troll Campaign 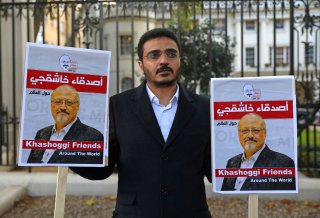 When a movie is the target of an organized campaign to knock down its Rotten Tomatoes or IMDB user scores, the culprits are usually angry fans of Star Wars or various comic book movie franchises, because they’re mad at Rian Johnson or Brie Larson or someone else they see as having sullied their beloved imaginary characters.

Now, there’s reportedly been a similar campaign against The Dissident, a new documentary about the assassination of journalist Jamal Khashoggi. And those behind it, rather than disgruntled fans of Batman, appear to be agents of the Saudi regime.

According to a report Thursday by The Washington Post, nearly five hundred low audience scores out of twenty-three hundred hit Rotten Tomatoes on a single day, January 12, knocking the film’s audience score down to 68 percent, down from a high in the 90s a few days earlier. The movie’s critics score is 97 percent positive. There has been a similar campaign on the movie’s Internet Movie Database page, with over one thousand negative reviews appearing.

According to The Washington Post, the filmmakers, including director Bryan Fogel, blame the Rotten Tomatoes campaign on “trolls operating on behalf of the Saudi government who wish to create a false sense of dissatisfaction.”

The Washington Post is also the newspaper where Khashoggi worked as a columnist in the last part of his life, and whose owner, Jeff Bezos, has also clashed with the Saudi regime. Bezos, of course, is the founder and CEO of Amazon, which also owns IMDB.

Fogel previously directed the Oscar-winning Icarus, which dealt with Russia’s Olympic doping program. He has said in previous interviews that he believes fear of drawing the wrath of the Saudi regime is what kept major distributors from picking up The Dissident, which received a modest theatrical release and has since landed on video-on-demand channels. Icarus was distributed through Netflix, but that streaming giant elected not to pick up the director’s follow-up film.

The Dissident points the finger at Crown Prince Mohammad Bin-Salman and the Saudi regime for the 2018 death of the journalist, who disappeared in the Saudi consulate in Turkey. The film also deals with the Saudi regime’s hacking efforts, as well as their attempts to manipulate social media, including trending topics.

The other recent documentary about the killing of Khashoggi, Kingdom of Silence, debuted on Showtime last October. It has no Audience Score on Rotten Tomatoes, “because user reviews are not accepted until this title is released.” It may be that the Showtime documentary is considered a TV show, rather than a movie, for Rotten Tomatoes’ purposes.