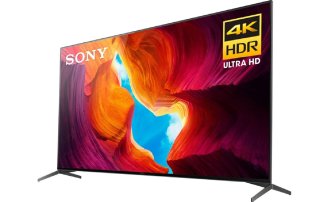 Since 2015, Netflix has been bestowing a “Netflix Recommended TV” designation to certain TV models that meet its standards of quality and ease of use when it comes to the TVs' Netflix functionality.

In order to qualify, TVs must meet 5 out of 7 criteria: TV Instant On, Fast App Launch, Easy Netflix Access, Always Fresh, the Hi-Res Netflix Interface, Optimized for Interactive and the Latest Netflix Version.

That second-to-last one, Optimized for Interactive, is a new part of the criteria this year, now that Netflix has been embracing such interactive content as the recent special “Unbreakable Kimmy Schmidt: Kimmy vs. the Reverend.”

"Interactive shows and movies unlock a whole new level of engagement — giving our members the ability to participate and choose the direction of the story they are watching," Netflix's Brady Gunderson said in a blog post.

"And when it comes to making a choice and seeing what happens next — speed is everything. Our evaluation ensures that, for example, when you choose to defeat the reverend and make it to your wedding on time from our latest interactive special “Unbreakable Kimmy Schmidt: Kimmy vs. the Reverend,” you can see the results of your choices immediately and enjoy the big day."

Netflix announced earlier this week that it has placed ranges of TV models from Samsung and Sony to its Netflix Recommended TV program. The Samsung models include models from the QLED 8K, QLED 4K and Lifestyle TV lines, including the Q950TS, Q900TS, Q800T, Q90T, Q80T, Q70T, The Frame and The Serif.

In addition, the Netflix Media Center page lists several models from Panasonic, including the HX750, HX800, HX810, HX820, HX830, HX850, HX880, HX900, HX940 and HX970. Those aren't listed on the main Recommended TV page, which may be because Panasonic stopped selling its TVs in the U.S. a few years ago, although it does still make them and offer them in other countries, including Canada.

"Additional models and brands will be added as they become available and are designated.," the program's website says.