QLED vs. OLED: What Do HDTV Buyers Prefer? Here Is What the Data Says. 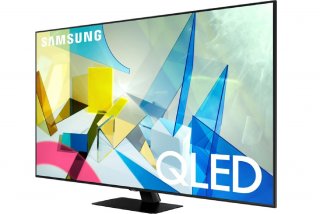 What effect will the coronavirus pandemic have on HDTVs?  Some new numbers are out forecasting how the OLED and QLED markets will stack up this year.

According to numbers released this week by display market tracker WitsView, and cited by the Korea Herald, global OLED shipments are expected to rise by a small amount this year, with the smaller but faster-growing QLED market's shipments predicted to increase by more.

OLED shipments, per the report, are expected to rise 7.8 percent year-over-year to 3.375 million units this year, although that number represents a 26.1 percent decrease over the forecast earlier this year.

QLED shipments however are expected to rise 41.8 percent year-over-year to reach 8.27 million units.

Meanwhile, per a Rapid TV News write-up of the same study, global TV shipments of all kinds are expected to decrease 5.8 percent, to 205.21 million, this year. Per Statista figures from late last year, the TV market is dominated by “traditional LCD” panels,

The report states that the OLED market will be hurt by the disruption in supply of panels that took place when coronavirus struck China and other areas of Asia earlier this year, most notably to LG Display's operations.

The QLED category, which is dominated by Samsung but also includes other brands such as TCL that are part of the QLED Alliance, has been hurt less it appears. Vizio also sells Quantum-branded TVs that are similar but don’t carry the “QLED” branding.

"Aside from the pandemic-induced slowdown in OLED demand, the more flexible pricing of QLED products will also represent a substantial threat to the sales of OLED TVs this year, since the latter have historically maintained a high retail price," Witsview said, as cited by the Korean newspaper.

"In spite of the downturn in global TV shipment this year, the market for QLED products thrived on the flourishing stay-at-home economy as well as the sales promotions of Samsung Visual Display's older models in the first quarter of 2020, which resulted in retail price cuts of more than 20 percent for 65-inch QLED TVs in the North American market, incidentally creating a wave of replacement demand for new TV sets," the firm added.