The Reviews Are In: Sony's X900H Called "Stunning" 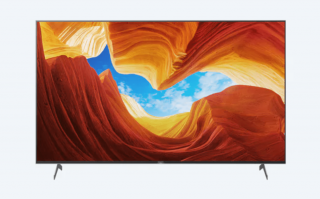 Sony, back at CES in January, introduced its expansive line of 2020 4K and 8K TVs. The lines featured nine separate models, at a price range between $599.99 and $9,999.99. Pricing and availability was announced for the TVs in April.

This week, reviews appeared of the X900H line.

RTINGS gave the series a total mixed usage score of eight out of ten, calling it “an overall great 4k TV for nearly any type of content.” The review praised the model’s excellent contrast ratio, low input lag, fast response time and great peak brightness, with its only “con” listed as “subpar viewing angles.”

The X900, the review said, “delivers good picture quality thanks to its excellent contrast ratio, high peak brightness, and wide color gamut. It has a fast response time that results in very little motion blur, and its input lag is low enough to satisfy even serious gamers. HDR content is delivered with vibrant colors and highlights that pop. Unfortunately, it has narrow viewing angles, making it less ideal for large rooms or wide seating arrangements.”

RTINGS’ overall TV rankings place the X900H series eighth among Sony TVs, and sixth among TVs from 2020. The site ranked the Sony X950H, also from this year, at 8.2.

Another review of the series, by Digital Trends, was posted last week. Giving the X900H series four stars out of five, the review praised the TV’s “great black levels,” “impressive HDR highlights,” clean picture, accurate color, and “snappy” Android TV response. The only cons listed were the “reflective screen,” and the lack of availability of VRR for games.

“The Sony X900H has one of the best picture quality to price ratios you’ll find this year,” the review said. “Its screen is a little reflective, and off-angle viewing on this type of LED/LCD TV is never great, but those two blemishes can be overlooked thanks to rich, colorful, and cinematic picture quality.”