Samsung’s Galaxy Z Fold 2: The Early Reviews Are In... 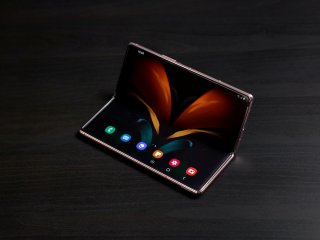 Samsung on Monday officially took the wraps off its Galaxy Z Fold 2 foldable smartphone, which it had hinted at in its Unpacked event about a month earlier.

The Galaxy Z Fold 2 is a foldable smartphone that offers a 6.2-inch cover screen and a 7.6-inch main screen, along with 5G capability. Running Android 10 and offering such features as All-Day Battery and Super-Fast Charging, the Z Fold 2 retails at just under $2,000, with preorders opening Tuesday and the product becoming available on September 18.

No full reviews have yet been published of the Samsung Galaxy Z Fold 2, but several unboxing and “hands-on” evaluations have appeared of the device.

Tom’s Guide says that the new phone “delivers nearly everything you could want in a foldable phone for a very high price.” The early review praises the phone for its larger cover display, the flex mode, improved multitasking, a more durable design and apps that make use of tablet mode. It’s listed cons are the high price, the phone’s relative heft, and that it’s not water-resistant.

“The Samsung Galaxy Z Fold 2 is the quintessential example of a company listening to its customers and delivering a wide range of improvements they asked for,” the piece said. “At $2,000, this is a phone that’s still very much for early adopters, but the Z Fold 2 seems a lot less like a prototype and more like a thoughtful evolution of an exciting new foldable phone category.”

“The Galaxy Z Fold 2 improves on a number of the original Fold’s design traits, and includes modern specs and 5G support,” that site said. “Its hefty price won’t appeal to most buyers, but it could be worth the money to foldable enthusiasts and multitaskers.”

TechRadar also praised the phone for addressing the shortcomings of the original Galaxy Fold. The site approvingly noted the Galaxy Z Fold 2’s much bigger front screen, high-end specs and camera, while TechRadar lamented that the new phone is not waterproof, and that the high price “puts it out of reach for many.”

“The Samsung Galaxy Z Fold 2 looks like a significant and impressive upgrade over the original fold, with Samsung taking on board feedback from both users of the original Galaxy Fold and critics to deliver improvements across the board,” that site said in the early review. “All of this combines to make the Galaxy Z Fold 2 feel more like a distinct, extremely versatile, and genuinely useful device, rather than just another phone that happens to be foldable.”