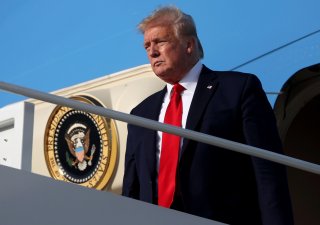 Much has been made about how President Trump proposed a Space Force, Netflix was inspired by the idea to create a TV series based on that idea, and the Netflix show came to complete fruition much more quickly than the actual Space Force has.

Now, it turns out that the fictional version of Space Force outpaced the real one in another way.

According to The Hollywood Reporter, Netflix managed to secure the trademark rights to "Space Force" in various foreign markets, including Europe, Australia, Mexico. In the meantime, the Air Force "merely owns a pending application for registration inside the United States based on an intent to use." Netflix streams all around the world, which was the reason for securing rights in other countries.

There is precedent for this, as reported in the story. Paramount trademarked the word "JAG," at the time that the CBS series of that name was on the air, which the real-life military did not oppose. The military began working to more aggressively register trademarks in the late 2000s, and even won a trademark dispute with Disney over the phrase "Seal Team 6," not long after that team killed Osama Bin Laden.

One lawyer quoted by the Hollywood Reporter suggested that, thanks to the president's "unpredictable nature," the matter could end up in "legal warfare," although the First Amendment would likely guarantee the Netflix show's right to continue using the name.

The Netflix version of "Space Force," which debuted May 29, tells the story of a fictionalized version of the agency, starring Steve Carell as the general placed in charge of it, John Malkovich as the force's chief scientist, and a cast that includes Ben Schwartz, Lisa Kudrow, Jimmy O. Yang and the late Fred Willard. The show was co-created by Carell and Greg Daniels, who worked together on "The Office."

While "Space Force" has been praised for getting military details right, it has been largely drubbed by TV critics, who have slammed its uneven tone and lack of both laughs and satirical bite. The show, however, has been a perennial on Netflix's top ten list ever since its launch and was #3 as of Tuesday morning. There's been no announcement, however, about a second season.