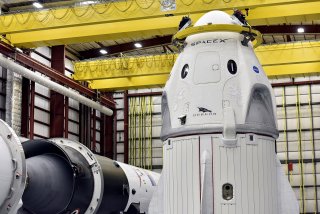 In keeping with its innovative, forward-looking vision, SpaceX decided to ditch the old-fashioned buttons and dials on the Crew Dragon for next-generation touchscreens.

For Bob Behnken and Doug Hurley, the two astronauts who will launch to the International Space Station aboard a Dragon capsule on May 27, this will likely mean relearning some of the onboard controls that have become part of their muscle memory after years of intense training.

The two astronauts, though, are confident in their years-long preparation efforts, as they have successfully worked through any potential issues via countless hours in simulators.

“It was on the order of at least five or six years ago that we went out to SpaceX and evaluated a bunch of different control mechanisms. They were looking at every which way of flying the vehicle, and ultimately, they decided on a touchscreen interface,” Hurley said during a press interview broadcast by NASA.

“Of course, you know, growing up as a pilot my whole career, having a certain way to control the vehicle, this is certainly different. But we went into it with a very open mind, I think, and worked with them to define the way you interface with it—the way your touches actually registered on the display, in order to be able to fly it cleanly and not make mistakes touching it. Not potentially putting in a wrong input.”

The upcoming mission will be the first orbital human spaceflight to launch from American soil since NASA’s space shuttle fleet retired in 2011.

SpaceX is flying Demo-2 under a $2.6 billion contract the company signed with NASA’s Commercial Crew Program in 2014. That agreement also covers six operational missions to and from the International Space Station, which SpaceX can begin flying after the completion of Demo-2.

“It’s probably a dream of every test pilot school student to have the opportunity to fly on a brand-new spaceship, and I’m lucky enough to get that opportunity,” Behnken said.

Behnken was quick to point out that this mission has a very specific purpose in mind—and that is to dock with the International Space Station.

“When we evaluated the touchscreen interface, we really did focus on the task at hand and trying to get good performance for that specific task,” Behnken said.

Dragon made history in 2012 when it became the first commercial spacecraft to deliver cargo to the International Space Station. Previously, these missions were handled only by governments.

This NASA F-106B Plane Was Struck By Lightning 714 Times