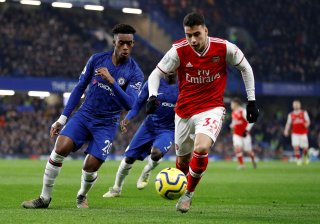 American sports are getting ready to come back later this month, but international soccer came back even earlier, with English, German, Spanish and other club leagues returning in June.

And now, how Americans can view soccer is about to change.

ViacomCBS announced a deal Thursday with UEFA, the Union of European Football Associations, “to serve as the exclusive English-language home in the U.S. of the UEFA Champions League, UEFA Europa League and UEFA Europa Conference League through 2024.”

The deal goes into effect in August, will add all of those competitions to the CBS All Access streaming service, while “select marquee matches” will air on CBS itself, as well as the CBS Sports Network.

The deal, per Yahoo Sports, was announced after Turner Sports opted out of the final year of its UEFA deal, and CBS had been in line to take over the rights starting in 2021.

UEFA is the governing body of soccer in Europe, and the Champions League is an annual tournament featuring the best club teams from the various European leagues. The Champions League, like all other sports, was paused due to the coronavirus pandemic, but the deal with ViacomCBS adds the conclusion of this season.

Also Thursday, Comcast and NBC Universal announced that the premium tier of its upcoming Peacock streaming service will exclusively stream 175 matches in the English Premier League in 2020–21.

NBC has held the rights to the Premier League for the last several years, and the company also announced that the content from the NBC Sports Gold Premier League Pass will migrate to the premium tier of Peacock.

“This exclusive Premier League programming is an exciting addition to our live sports content on Peacock Premium, and we are thrilled to continue delivering our best-in-class Premier League coverage to NBCUniversal linear television customers as well as new Peacock subscribers,” Rick Cordella, EVP and Chief Revenue Officer, Peacock, said in the press release.

Peacock, as of earlier this week, had not yet reached a deal with Roku or Amazon to be carried on those platforms, ahead of Peacock’s launch on July 15.