Three TCL products get Eyesafe Display Certification (As in the TVs?) 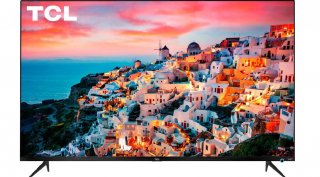 TCL announced last month that its QLED Android TVs had received the coveted IMAX Enhanced Certification, becoming one of just two TV brands - Sony being the other - to receive it.

The products are all from TCL's China Star Optoelectronics Technology (CSOT) division, and include the CSOT 10.X WQXGA Eyesafe Tablet, CSOT 14.0 UHD Eyesafe Monitor and the MG2701B01 Eyesafe Monitor.

"TCL CSOT will adhere to the strategy of becoming a global leading intelligent technology company," said TCL founder and Chairman Li Dongsheng, said according to the press release.

"Announcing that our devices and panels will now meet the best-in-class Eyesafe Display Certification sends an important message to our supply chain partners. This is a very momentous day for our company, and it marks a major achievement by our engineering and products teams."

The standard was developed by Eyesafe in conjunction with the German-based agency TÜV Rheinland. The certification, the release said, comes at a time when screen time has reached up to 13 hours per day, while placing a strain on device users' eyes.

"We are very pleased to see that TCL CSOT, as one of the world's most important electronics display manufacturers, is making consumer health a priority by taking these steps to adopt the Eyesafe Display Standard to bring advanced low blue light displays to market," Dr. David Friess of the Eyesafe Vision Health Advisory Board, said in the announcement.

"Across the globe, the increasing use of displays as people spend larger amounts of time each day using devices and screens for work, education and entertainment has further increased the attention around health and wellness concerns with high-energy blue light."