Xiaomi Debuts Transparent OLED TV: What You Should Know 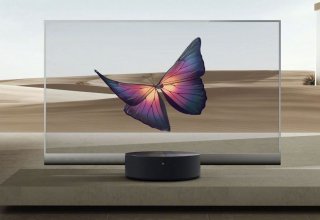 Now, the company has debuted another OLED TV unlike any other—what it calls the world’s first mass-produced transparent TV.

It’s called the Mi TV LUX OLED Transparent Edition and it is 55-inch inches wide. As the company said in a press release, it “ushers in a new way to consume visual content previously only seen in science fiction films.”

Along with the Mi 10 Ultra and Redmi K30 Ultra, the new TV is described by the company as “Xiaomi’s third big drop during its 10 year anniversary launch event.”

How can a TV be transparent? According to the company, the Transparent Edition “creatively embeds all the processing units in its base stand, preserving the compact shape of the screen.”

“Mi TV LUX OLED Transparent Edition offers a perfect combination of cutting-edge display technology and exquisite industrial design,” the company said. “For Xiaomi, it is also a major exploration of future TV forms. When Mi TV LUX OLED Transparent Edition is turned off, it looks like a mere glass display. The pictures it displays seem to be floating in the air, merging the virtual and the real to bring an unprecedented visual experience.”

It’s priced at RMB 49,999, which is the equivalent of about $7,200. It hits the market August 16 in China, but, as Engadget reported, it’s unlikely to be available outside of Asia.

Xiaomi, for most of its decade-long history, has been associated with smartphones, having achieved a fourth-place share in 5G smartphones in the world as of earlier this summer. Moreover, the company’s Xiaomi Redmi 8 is also the world’s second-most-popular Android smartphone.

Xiaomi is one of just four companies in the world, along with Apple, Samsung and Huawei, to have developed its own smartphone chips, per Forbes.

“The ability to create its own chipsets is the pinnacle achievement for any smartphone company,” Xiaomi CEO and cofounder Lei Jun in a statement, per Forbes. “For Xiaomi, the move is an essential next step in our development. In order to deliver on our promise to make innovation available to everyone, we need to master the core technologies of our industry and tightly integrate the development of our hardware with our software, helping us to make even better smartphones that will consistently surprise the industry and delight consumers.”

Xiaomi, unlike Huawei, ZTE, TikTok and other Chinese companies, has managed to not draw the ire of the U.S. federal government in the Trump era.