The US Navy Needs More Submarines to Match Russia and China 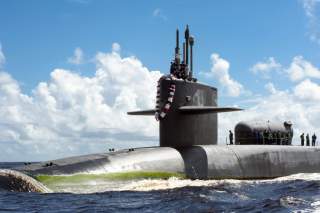 The United States Navy and the submarine industrial base might be able to build more than two submarines per year if the Pentagon increases the requirement for the number of attack boats in the fleet.

It would take considerable investment to reconstitute the industrial base—which could build as many as six attack boats (SSN) and a ballistic missile submarine (SSBN) during a single year during the 1980s—if the Navy increased its requirement from 48 subs to a higher number. However, the Navy is struggling to meet the demands of combatant commanders around the world with its current fleet of 53 attack submarines—which is technically in excess of its 48-boat requirement—as the Russian undersea force reemerges from its post-Cold War dénouement and the Chinese fleet grows rapidly. Worse still, the Navy’s submarine force is expected to shrink to only 41 attack boats in 2029. Indeed, from Congressional testimony, it is apparent that the Navy is likely to raise its requirements for the number of attack submarines in the fleet.

Asked directly if the U.S. Navy could build additional attack submarines should the service increase its requirements, Naval Sea Systems Command’s program executive officer for submarines Rear Adm. Michael Jabaley said that it was possible to meet the demand. “Yes, it can be done,” Jabaley said. “But we have not looked at anything beyond two Virginias and one Ohio in the same year with the level of fidelity that would be required to talk dollars and time, but it would be a significant effort.”

The reason that the U.S. Navy and its industry partners at General Dynamics Electric Boat and Huntington Ingalls Newport News cannot ramp up production to the levels seen during the 1980s is because the nature of the industrial base has changed. “Even though we still have two fully qualified nuclear shipbuilders who are both capable of delivering a nuclear submarine, we are deeply committed to the teaming agreement to the point where there are things where we have gotten to where—because it makes sense to do it financially—we have only facilitized one shipbuilder to do that particular task,” Jabaley said. “In the ‘70s and ‘80s we built multiple attack submarines plus one Ohio SSBN a year, but it was under a fundamentally different architecture of submarine shipbuilders.”

During the flush years of President Ronald Reagan’s late-Cold War-era defense build-up, the nation’s two submarine shipyards were not under a teaming agreement because of the sheer volume of work. Every year, the Navy would order several Los Angeles-class attack submarines in addition to an Ohio-class boomer. But after the end of the Cold War—particularly during the 1990s in the immediate aftermath of the collapse of the Soviet Union—submarine construction slowed to a crawl with only a handful of boats being built. The Navy had to arrange for a teaming agreement between Electric Boat and Newport News to ensure both of those critical elements of the national defense industrial base survived the lean years.

“The submarine build rate dropped off significantly,” Jabaley said. “We definitely ramped down the build rate and then we built three Seawolf submarines in the ‘90s and early 2000s—which is not enough to sustain a force—and then started building the Virginias, but didn’t get to two per year until 2011. With a 33-and-a-half year life of a Virginia-class submarine, you have to build one and half per year just to maintain 48 SSNs and we built less than one submarine a year from the 1990s to—average—2011 because even in the first ten Virginias there were some gap years in there.”

To eventually rebuild to just the minimum 48-boat requirement will take decades at the current build rate. The fleet will not reach a sustained 48 submarine level until 2042. The Navy—using a plan called Submarine Unified Build Strategy (SUBS)—hopes to save enough money by generating efficiencies to continue to build two Virginia-class SSNs per year even as construction starts on the first Ohio Replacement Program (soon to be formally named the Columbia-class) SSBN in fiscal year 2021. “The current program of record says that the Navy will build two submarines every year,” Jabaley said. “If there is no Ohio Replacement that year, then it’s two Virginias. If there is an Ohio Replacement that year, then it’s one Ohio Replacement and one Virginia.”

The twelve Ohio Replacement submarines will be built in 2021, 2024, and then in every year from 2026 to 2035. Under the current plan, the Navy will only be able to build one Virginia-class SSN during those years unless the service finds additional savings or Congress appropriates more money to meet the demand from U.S. combatant commanders. During that time, the Navy’s attack submarine force will continue to shrink down to 41 boats even as Russian and Chinese submarines forces expand.

“That’s 12 years where I’m only building one Virginia-class submarine,” Jabaley said. “That program of record has been in existence for several years and what has changed is a couple of things—first there is a greater recognition of a change in the threat environment, so the resurgence of Russia and the ascension of China have changed in a significant manner the quantity and quality of submarines that are being brought into the world today by countries that we don’t consider to be our allies. The strategic environment is different.”

Secondly, Jabaley said, Virginia-class production has reached a level of performance where the program consistently delivers high-quality boats ahead of schedule at costs that are continually dropping. Disrupting the Virginia production pipeline would not only potentially stymie rebuilding the fleet, but also damage the workforce building those vessels. ‘We’re reached this rhythm, this cadence, this proficiency by the learning curve that you kinda hate to throw away,” Jabaley said.

But to build the second Virginia-class boat in 2021, the Navy has to first figure out if it can afford that submarine. But moreover, the Navy has to figure out if the submarine industrial base as it currently exists can handle the workload. While building the Ohio Replacement would maintain the two-submarine build rate, Jabaley noted that the massive 20,800-ton ballistic missile submarines are each equivalent to building two-and-a-half Virginia-class boats. Thus far, the Navy believes that it will be able to find enough savings and has enough industrial capacity to build three submarines in 2021. “Our assessment—at least in that first year, 2021 where you’re bringing in that first Ohio Replacement—it is still well within the realm of achievability to continue to build two Virginias,” Jabaley said.

The second 2021 Virginia is particularly important for the Navy because it will help backfill some of the deficit in submarine presence in the service’s fleet. The Navy is currently required to generate 51-“submarine years” per annum. The second boat would help fill the requirements gap in several years where the service falls short of generating those submarine years, Jabaley said.

The Navy is still working on if the two shipyards will be able to handle starting construction of three submarines every year going forward from 2021. The problem that the Navy and its contractors face is that as construction continues on the Ohio Replacement and Virginia-class simultaneously, there will be several SSBNs and SSNs in the yard at the same time. There are real questions as to whether the shipyards have the capacity to build that many submarines at the same time.

“We still have work to do on identifying exactly what additions to facilities would be required in order to continue building two Virginias per year once you get into the meat of the Ohio Replacement program,” Jabaley said. “When you have six of seven Ohio Replacement submarines in construction all at the same time, and you’re really starting to generate tens of thousands of tons of work in progress, it becomes more difficult.”

In an earlier interview with General Dynamics Electric Boat, the company suggested that industry was more than capable of handling the workload of building three or more submarines per year. “We feel pretty comfortable that we’ll be in a position to handle that,” said Will Lennon, Electric Boat’s vice-president of engineering and design programs in an interview with The National Interest.

However, both Electric Boat and Newport News will have to grow their facilities and hire more people to handle the enormous task—particularly during the 2020s. “We’re looking at what it would take to scale up to be able to handle additional Virginias during the time of Ohio Replacement,” Lennon said. “So adding the second ship in ’21 is really not a big impact to us. It changes the phasing of our facility expansion, but it doesn’t increase the number of facilities we have to have.”

But what if the Navy revises its requirements to a level such that production must be further increased? It might be possible to increase production beyond even three submarines per year. Stevens pointed out that during the 1980s, the United States was producing four attack submarines and two Ohio-class boomers at one point. “There is history that suggests we could build a lot more,” Stevens said. “But that would require more investment.”