For the US, Sailing Around the South China Sea Is Not Strategy 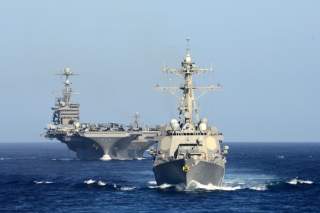 After President Barack Obama’s visits to Vietnam and Japan, the wider Asia-Pacific region has to wonder what the future holds as a dangerous geostrategic rivalry develops between the People’s Republic of China and the United States. And considering the stakes, such worries are completely justified.

The rise of China – and its campaign to “salami slice” its way – occupying small pieces of reefs and semi-submerged features in the South China Sea in increments towards regional dominance – threatens America’s dominant position in Asia. Beijing’s seemingly inexhaustible need to control the world’s most economically vibrant region has set in motion what the New York Timesrightly called a “game of chicken” that many fear could spark a tragic great-power war.

China’s goal is simple: Dominate the Asia-Pacific and slowly but surely push America out. To achieve this, Beijing must negate the sizeable military assets Washington has in the region – especially the US Navy. To operationalize such a strategy, Beijing has developed a concept known to Western strategic analysts as anti-access/area-denial, or A2/AD. Leveraging the combined strength of such military platforms as ultra-quiet submarines; more than 80,000 sea mines, the world’s largest inventory; air-defense platforms; budding undersea tracking systems; various cruise missiles; and two deadly anti-ship ballistic missile systems, China has set the stage to turn areas around its near seas, as far away as the very ends of the South China Sea towards Indonesia, into what some are calling a “no-man's land” for US naval vessels and aircraft.

And Beijing’s A2/AD strategy launched in early-2000s seems now to be expanding into what author Robert Kaplan called Asia’s Cauldron, or the South China Sea. China has undertaken what can only be described as a clever effort to build small military outposts on reclaimed reefs, underwater features and islands. While at various times claiming it would not “militarize” the area, Beijing has placed advanced anti-ship weapons, anti-air assets and rotated fighter jets into the area thanks to massive new airfields. If China proceeds by installing anti-ship ballistic missiles along with newly purchased Russian S-400 air-defense batteries, the stage would be set for not only a credible South China Sea air-defense identification zone (ADIZ) but the severe degradation of America’s military capabilities in this economically critical body of water. In the event of a crisis, Washington would face a terrible choice: unthinkable military losses or simply walking away, thus leaving the region to China’s mercy and America and its critical alliance networks marginalized or even broken.

As for responding to the changing strategic situation in Asia, the United States has suffered a series of setbacks, some unavoidable and others self-inflicted.

When Washington could turn its attention to Asia – complicated by Russian actions in Ukraine and the rise of the Islamic State – the results have been mixed. While the Pentagon has attempted to dampen the impact of China’s A2/AD strategy with an important operational concept named Air-Sea Battle (ASB) – designed to leverage the combined joint warfare operational powers of the US Navy and Air Force to take down Beijing’s anti-access networks – fears of possible escalatory strikes on the Chinese mainland that could lead to a nuclear showdown have stirred controversy and unneeded doubt. Also, by its very nature focusing on armed conflict, ASB does nothing to place needed roadblocks to stop China from expanding its potential zone through reclaimed reefs and military equipment in the South China Sea.

So far, the only US action that demonstrates resolve has been to conduct three so-called “freedom of navigation” operations, or FONOP – suggesting to Beijing that Washington will “fly, sail and operate wherever international law allows.” Unfortunately for the United States, while such actions show some sort of response, they do nothing to slow China’s attack on the status-quo – and fall far short of a much needed comprehensive strategy. As Washington simply sails around the South China Sea, Beijing presses ahead with installing ever-more advanced pieces of military hardware and could be planning to reclaim the strategically important Scarborough Shoal next. Beijing’s new islands and equipment are permanent; while America’s naval excursions are temporary, the vessels destined to float away.

Considering the stakes in the South China Sea for the United States along with regional allies like Japan, the Philippines and others, a stronger set of options is needed to dramatically slow or halt Beijing’s attempts to unwind the status quo. Sizeable roadblocks must be placed before China that, if crossed, would entail a sizeable price from Beijing.

I have proposed in the past a concept called “shamefare” as a challenge to Chinese actions in the South China Sea by publicly embarrassing China for its expansionist moves. The United States, along with its regional partners and allies, must make every effort at documenting Beijing’s actions and distributing them around the world – especially through social media.

For example, video cameras should be placed on any military asset that has the potential to come in contact with the Chinese military or paramilitary actors. If an aggressive action is taken by China – as when a Chinese J-11 fighter came within 15 meters of a US surveillance plane on May 17 – the US government should release the recording without delay. Reports have noted the Pentagon has footage of the incident, but won’t release it – an error that must be corrected. Additionally, the recent US FONOP in the South China Sea near Fiery Cross Reef should also have been documented – putting a human and important non-threatening face on such operations.

Shamefare should also be expanded to allies and partners like the Philippines and Vietnam who have had negative interactions with China on the high seas. Imagine if Manila had documented the 2012 standoff with Beijing over Scarborough Shoal for the whole world to see? What if Hanoi had filmed in greater detail China’s billion-dollar oil rig off its coast surrounded by more than 100 fishing and other vessels? Imagine if such images and video were shared on popular social media networks then filtering down to television and standard news organizations – the impact and outcry would be truly historic while dramatically increasing the costs of such aggressive Chinese actions.

Shamefare itself though is not a strategy. It must be combined with a revitalized Air-Sea Battle concept, now called JAM-GC; continued FONOP operations; complete documentation of Beijing’s destruction of the environment around island reclamation projects; increased “lawfare” with Vietnam and other South China Sea claimants suing China in international courts; and Washington once and for all making Asia its single most important foreign policy focus. Anything short of such an effort will see China dominate the region.

Considering the dilemma presented by Beijing, Washington has been caught off guard by the scope, size and sophistication of China’s coercion. A do “something foreign policy” full of slogans and slick-sounding military concepts alone is a recipe for disaster. Only a focused America, willing to enact a bold strategy in the face of Beijing’s aggressive actions has a chance of success. Indeed, one thing is plainly obvious – simply sailing around the South China Sea is not a strategy for success.

Harry J. Kazianis (@Grecianformula) is a senior fellow for Defense Policy at the Center for the National Interest, fellow for National Security Affairs at the Potomac Foundation and a senior editor at The National Interest. He is the former editor-in-chief of The Diplomat. Kazianis is the author of a new monograph on Chinese military modernization: The Tao of A2/AD.

This article was first posted in YaleGlobal.