5 Reasons Why the World Will Miss Donald Trump 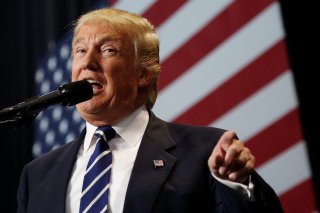 Donald Trump will go down as the worst president in the history of the United States. As a lifelong Republican and a Never Trumper, I couldn’t stand the man. For the past four years, I have intentionally buried myself in the intricacies of Ukrainian politics, remaining for the most part blissfully unaware of Trump’s latest rage tweet or the shenanigans of his underlings, like when his press secretary hid in the White House shrubs to get away from the media. Nevertheless, I will miss him. Here are five reasons why you might miss him too.

First, while Philip Roth noted that Trump “wields a vocabulary of seventy-seven words better called Jerkish than English,” the truth is that Trump spoke with tremendous verve. He may not have been coherent, but he was always quotable. Trump’s hourly assaults on grammar and syntax, usually delivered in 280-character bursts, were painful to purists but memorable to everyone else. They gave new life to everyone whose work is words. It won’t be long before cub reporters and seasoned pros alike long for the return of the extravagant showman.

Second, there was drama. Did the secretary of state just get fired? Is the president headed to North Korea? Did you hear what Trump just did? Say goodbye to all that. Now that the Associated Press has called the race, and familiar presidential bromides are wafting once moreover Washington, so get ready for another nap and Netflix. The thousands of people took to the streets of Washington on Saturday night dancing and waving American flags looked like they could have been at a small-town Fourth of July parade (except for the person draped in a NATO flag, which is something that you would probably only see in DC). There was no violence. The loudest noises on Black Lives Matter Square were a cowbell and my five-year-old chanting “USA, USA.”

Third, Trump ignored the blob (and yes, I’m talking about us). Sometimes the conventional wisdom needs to be bucked. Trump sent Javelin missiles to Ukraine, something his cerebral predecessor refused to do. Obama claimed that arming the Ukrainians would rile the Russians bear, potentially sucking the United States into yet another war. He was flat wrong; foreign policy novice Trump made the right call, giving Ukraine greater security and assurances of U.S. support. When Trump ordered the killing of Iranian Maj. Gen. Qassim Suleimani, the talking heads foretold disaster. It didn’t happen. Trump got Bahrain, Sudan, and the United Arab Emirates to recognize Israel. These are real achievements.

To be clear, he got lucky a few times, but his foreign policy set back the ability of the United States to project power for decades. Giving Saudi Arabia a pass when it brutally murdered a prominent journalist in its Istanbul consulate, coddling autocrats, and putting Michael Pack in control of U.S. international broadcasting were epic errors. The bright spots should come as a reminder, though, that sometimes you can get things done by studiously ignoring the Council on Foreign Relations.

Fourth, the Mooch. There was never a White House communications director like him before, and there never will be again. Those eleven days will live on in hilarity, but let’s not forget the rest of the bizarre bestiary Trump dredged up. Third-rate think tank analysts, GOP nobodies, and absolute randos had no idea what opportunities were about to come their way when a reality TV star was elected in 2016 without a real team in place. We will not see their like again.

Finally, Trump’s indifference and incompetence—remember, this is the man who couldn’t sit through the President’s Daily Brief no matter how it was presented to him—allowed career professionals and Congress to shine. When the president tried to zero out important exchange programs that bring foreigners to the United States, the Hill shrugged and put the money back. When the president tried to slash two-thirds of the budget for the National Endowment for Democracy, the same thing happened. And when Trump tried to blackmail the president of Ukraine into opening a politically motivated investigation, it was patriotic, principled civil servants, foreign service officers and members of the military who blew the whistle on him. The mad king did his worst, but our best did their best.

It was a long four years. Now, back to reality.