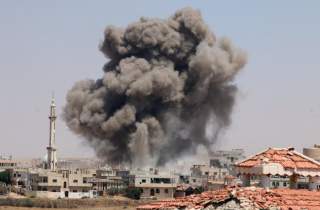 The United States is a global power with global interests and responsibilities. Protecting these interests hinges on access to the commons (sea, space, air, cyberspace) and stability in Europe, the Middle East and the Indo-Pacific region (the great trading centers).

In some ways the Middle East is the most important of these three regions. It is the intersection of commercial air and sea travel between the other key regions. It is a global energy hub, a lynchpin of international financial networks and a crossroads for human migration. Much of what is good (and evil) in the world is based in the Middle East or passes through it.

American prosperity and security is always heightened when this part of the world is more stable, peaceful and prosperous. Any serious U.S. strategy looking beyond 2020 must have a serious component for dealing with the Greater Middle East, including North Africa.

Opposite of Leading from Behind

Trump’s rhetoric drives some to distraction, but strategic leadership entails more than just what is said or tweeted. Actions—what the government actually does—matter even more.

On the “action” side of the equation, the Trump administration has reversed years of disengagement with the regional. That said, U.S. policy is hardly a heavy hand. The hallmarks of Trumpian statecraft are that: America doesn’t do regime change and nation-building; the United States carries its share; other nations are expected to carry theirs. All those trademarks are evident in the administration’s Middle East policy.

The two concerns that animate U.S. regional strategy are Iran’s destabilizing activities and the danger posed by transnational Islamist terrorist groups like ISIS and Al Qaeda.

One of the administration’s clear accomplishments was American assistance in dismantling the so-called ISIS Caliphate. Erasing the caliphate on the battlefield dealt a massive psychological blow to the Islamist movement and eliminated an incredibly dangerous platform and sanctuary for transnational terrorism.

The United States also withdrew from the Joint Comprehensive Plan of Action (JCPOA), commonly called the Iran Deal. This was the first step in challenging Tehran’s pernicious and malicious influence across the region. In addition, the United States has helped apply pressure on Iranian surrogates such as the Houthi rebels in Yemen and Shia militias in Iraq.

These actions have been necessary and helpful, but the region has hardly become the land of milk and honey. Some of its most persistent problems have been exacerbated by U.S. missteps. Others are stubbornly resistant to American influence. Geo-strategic headaches include: the debilitating war in Yemen; unsettled relations among the Gulf States (or Gulf Cooperation Council countries); contentious relations with Turkey; lack of progress toward human rights and economic freedom; uncertainty over Syria; huge numbers of refugees; illegal migration, and the persistent threat of transnational terrorism and Islamist fundamentalism.

In some cases, the best strategies for the region will emphasize patience and consistency. The United States must continue its pressure campaign to punish, isolate and undercut the influence of Tehran and its control over Iranian surrogates. Regional partnerships on counterterrorism remain vital. The United States also must persist in promoting human rights and economic freedom. The goal isn’t to be splashy and flashy so we feel righteous. The goal is deliver tangible constructive results. Smart statecraft does not try to treat all authoritarian regimes the same.

Strategy for the Next Administration

Still, treading water alone won’t secure U.S. interests in the Middle East. Here is the top of the strategy to-do list for 2020 and beyond.

1. Build a more robust security architecture. Early on, the Trump administration proposed the idea of a multilateral alliance with its Arab partners. The initial U.S. concept included security, economic cooperation and conflict resolution and deconfliction. Despite initial enthusiasm for the project, it was sidelined by a diplomatic dust-up between Saudi Arabia, UAE and Qatar. The murder of Saudi dissident Jamal Ahmad Khashoggi in Turkey complicated the situation even more. Further, a second round of U.S. efforts to create a Middle East Strategic Alliance was met with less enthusiasm. Still the administration hasn’t given up, and the next one shouldn’t either. There is a need for a regional security architecture that is not as formal as NATO, but more structured and formal than the web of frameworks the United States is putting together in the Indo-Pacific region. What might make sense is for the administration to go back to pushing something that looked more like its original proposal. In particular, there is value to using this framework to advance a constructive agenda on regional development.

2. Build a firebreak in North Africa. Middle East stability is more likely if there is a foundation of stability in Libya, Morocco, Egypt and Tunisia. It is particularly important for the United States to up its diplomatic game in Libya. With a stable foundation, the United States can work in concert with North African nations to advance trade, regional development, good governance and the productive use of energy resources.

3. Maintain maximum pressure to contain and roll back Iranian influence. Iran remains the chief threat to U.S. interests, U.S. allies, and stability in the Middle East. Economic sanctions have reduced Iran’s oil exports by more than 1 million barrels per day. This has severely undermined Iran’s state-dominated economy, diminished government revenue and made it more difficult for Tehran to prop up the Assad regime in Syria and finance its proxy militias in Iraq, Syria, Lebanon and Yemen. Washington also needs to maintain strong military forces in the region to deter Iranian aggression and work with its allies to strengthen missile defenses to offset the potential threat of Iran’s arsenal of ballistic missiles, the largest in the Middle East.

4. Consolidate and sustain the victory over ISIS; prevent the rise of other Islamist extremist groups. U.S. intelligence, reconnaissance and air strike capabilities are still needed to aid Iraqi and local Syrian forces against ISIS. Washington also should press the Iraqi government to fight corruption and be more respectful of the needs of Iraq’s Sunni Arab minority to convince them they are better off supporting the government rather than ISIS. In addition to a more equitable power-sharing agreement in Iraq, the United States should seek a political settlement in Syria that would end the fighting, permit the return of millions of refugees and drain away support for ISIS and Al Qaeda.

5. Stay committed to defusing the Israeli-Palestinian conflict. The Trump administration will unveil its long-awaited peace plan after Israel’s April 9 elections, but the time is not ripe for a comprehensive peace settlement. The inconvenient truth is that Hamas has created a pre-war situation, not a postwar situation that is amenable to some kind of compromise. After the Palestinian Authority rejects the Trump/Kushner peace initiative, Washington should revert to an incremental, long-term approach to peace negotiations, based on the realistic assessment that a genuine peace is not possible until Hamas has been squeezed out of power in Gaza. Two pillars should undergird the U.S. approach: strong support for Israel, and credible, effective means to advance good governance in Gaza and the West Bank. Until that has happened, Washington should try to manage the consequences of the Israeli-Palestinian conflict, rather than rush to failure on a comprehensive settlement. It is never too late for peace. The United States should continue to lay the groundwork, even if it is years in the making.

No region more requires sustained, steady and realistic U.S. policies. The Trump administration has been building the base to achieve such policies. What is needed is continued attentive follow-through.

James Jay Carafano is a vice president at The Heritage Foundation and directs its research into matters of national security and foreign relations.