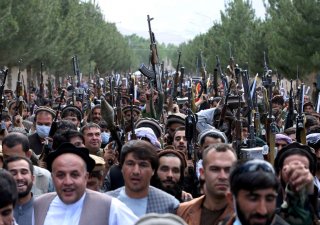 The Taliban seized the presidential palace in Kabul, completing their blitzkrieg through Afghanistan. President Ashraf Ghani fled in disgrace. “They tied our hands from behind and sold the country,” Defense Minister Bismillah Khan Mohammadi wrote. “Curse Ghani and his gang.”  Meanwhile, a humanitarian tragedy is underway. The Taliban are executing those who worked with the United States and reportedly raping their families.

Within Washington, the blame game is underway. President Joe Biden blamed his predecessor, President Donald Trump, and the peace deal with the Taliban that set a deadline for American withdrawal. The Trump-era deal was ill-conceived, but Biden’s excuses are disingenuous for three reasons. First, the Taliban did not abide by the deal and so voided it. Second, its deadline for American withdrawal passed several months ago and, lastly, Biden did not abide by other Trump-era deals about the border wall and Keystone XL pipeline, and so the notion that Trump had tied his hands was nonsense.

That said, while the flag of the Islamic Emirate now flies over the presidential palace in Kabul, the Taliban victory is not the end of the story. The Taliban rampage is less a measure of their popularity and more the result of their Pakistani support and momentum: Afghans seldom fight to the death but instead defect to the stronger side. Biden’s projection of both weakness and callousness was a gift to Taliban leaders seeking to sway provincial governors to step aside in exchange for their lives.

The Taliban, however, are not as strong as they might appear. In March 2000, I visited the Taliban’s Islamic Emirate. At the time, the Taliban controlled ninety percent of the country. They lobbied Washington to recognize them as Pakistan, Saudi Arabia, and the United Arab Emirates had and argued that they “were no more extreme than Saudi Arabia.” I drove through the Khyber Pass from Peshawar, Pakistan and then visited Jalalabad, Kabul, Ghazni, and Kandahar. In every city, Afghans said that the security the Taliban had promised when they initially arrived disappeared quickly as the Taliban themselves started preying on the people.

While some progressives, isolationists, and other critics of traditional American foreign policy say that the Reagan administration created the Taliban, this is anachronistic nonsense: The United States supported the mujahideen like Ahmad Shah Masood and others who became to core of the Northern Alliance that fought the Taliban. The Taliban itself formed in 1994. It is fair to criticize Reagan and the Central Intelligence Agency on other matters, but neither armed those who were Kindergarteners when the Soviets invaded.

During this period, the Northern Alliance held out. Many transited the Tajik border that was among the few open to them. In 1997, I had also visited Mazar-i-Sharif that at the time was under the control of Abdul Rashid Dostum. Then, I had entered from Termez, Uzbekistan, which was the route through which Uzbekistan and Turkey supported their proxy warlord. In 1999, Iran and the Taliban almost went to war after the Taliban had slaughtered Iranian diplomats and intelligence agents at their Mazar-i-Sharif consulate. While he did not control territory, the Iranians supported Ismail Khan as their proxy warlord.

Each of Afghanistan’s neighbors with the exception of Pakistan fears the Taliban. Expect each to sponsor over the next several weeks militias and warlords who will try to seize territory along the border to act as a buffer. Certainly, Russia will aid the former Soviet Republics that border Afghanistan since Russia fears radicalization among its growing Muslim population.

Because the Taliban relied more on momentum than military prowess, this means they may soon lose some of the peripheral provinces. Herat, for example, is culturally Persian and, indeed, was once part of Iran. If the Islamic Republic makes a concerted effort to put a proxy in power there, it will likely succeed. They may also assert control over Farah and Nimruz, the other provinces with which they share a border. The same holds true for the Badakhshan region of northeastern Afghanistan that borders Tajikistan.

As Afghanistan’s neighbors become active and sponsor new proxies, it might take a year or two of low-intensity fighting with the Taliban before they establish their own zones of influence and once again divide Afghanistan as it was during the civil war period of the 1990s.

The wildcard is Turkey. Recep Tayyip Erdoğan has made no secret that he has no ideological problem with the Taliban’s extremist platform. Pre-Erdoğan Turkey helped support Turkic warlords in northern Afghanistan and provided medical and logistical support for them through Uzbekistan and Turkmenistan. It is unclear whether Erdoğan will allow that to continue although it is more likely he will try to play both sides to maximum commercial advantage.

As for Pakistan, it is today is riding high but they may rue the day. The Taliban was an indigenous movement in 1994 that Pakistan’s Inter-Services Intelligence (ISI) agency co-opted. The ISI did so because their former proxy, Gulbuddin Hekmatyar, was wildly unpopular and so the Taliban, at least initially, was a better option. But the Taliban are the ideological cousins to Tehrik-i-Taliban Pakistan which is responsible for the deaths of thousands of Pakistani soldiers and civilians. Every country that has supported jihadism for export only has suffered blowback, and Pakistan will not be immune. The end of the American presence also means there is no force there to prevent anti-Taliban Afghans to take an insurgency and terror campaign into the Pakistani homeland. Indeed, Afghans with whom I spoke over the years have promised to do so.

In short, the Taliban may claim victory today but, for Afghanistan, they represent less the end of fighting than one chapter in a bloody history. Get ready for the next phase in the Afghan civil war.

Michael Rubin is a senior fellow at the American Enterprise Institute, where he specializes in Iran, Turkey, and the broader Middle East.