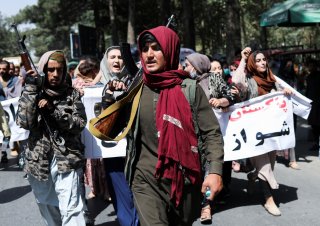 As the United States prepared to withdraw from Afghanistan earlier this year, I wrote that Pakistan should fear a Taliban takeover of the country. In the case of a Taliban takeover, sanctions would likely be imposed on a Taliban regime, impairing trade and investment and giving the already massive Afghan drug trade a further boost.

Pakistan could also face heightened security risks from terror groups harbored by the Taliban, chiefly Tehrik-i-Taliban Pakistan (TTP). I predicted that Islamabad’s assistance to the U.S. “War on Terror” and its attempts to pressure the Taliban at Washington’s behest had created bad blood that could rebound negatively on Pakistan if the militants seized power in Kabul.

And, indeed, the first three months of the new Taliban regime have been a rocky ride for Pakistan and Afghanistan’s new rulers. While Pakistan’s support for the insurgency ultimately succeeded in its aim of mitigating Indian influence in Afghanistan, the group’s victory is no panacea for the two state’s bilateral relations.

The Taliban’s hostility toward Pakistan remains unabated. Its fighters recently told the media that they want to extend their jihad to Pakistan because its government is “un-Islamic.” In September, Taliban fighters ripped the Pakistani flag off an aid convoy entering Afghanistan at the Torkham border, prompting an apology from the regime in Kabul.

On another occasion, a Pakistani journalist was allegedly kidnapped by Taliban fighters and asked why he did not support jihad in Pakistan. Terrorism analyst Faran Jeffrey tells me that younger Taliban fighters are particularly disparaging about Pakistan, referring to it as an ungodly “taghuti” regime in their online chats.

Furthermore, according to independent researcher Abdul Sayed, Taliban-linked Twitter accounts have repeatedly expressed the view that the Islamic State is supported by Pakistan. One tweet from mid-October claims that “the center of ISIS is Pakistan.”

This is the culmination of years of hostility. Speaking to the Canadian media over a decade ago, multiple Taliban fighters expressed negative views about Pakistan. A 2019 research study found that “Taliban members expressed resentment of Pakistan’s influence over their organization and Afghanistan’s broader affairs.”

Anti-Pakistan sentiments are pervasive in Afghanistan. Actors across the political spectrum routinely try to discredit their opponents as Pakistani proxies. The former Afghan government repeatedly accused Islamabad of supporting the Taliban, and Islamic State Khorasan (ISIS-K) propaganda has often branded the Taliban as a puppet of the Pakistani Inter-Services Intelligence.

To counter these attacks and present itself as a legitimate national movement, the Taliban constantly plays down its ties to Pakistan. Recently, spokesman Zabihullah Mujahid denied that his group was mediating talks with the TTP and rejected reports that the Taliban had offered to take military action against that organization.

Afghanistan-Pakistan relations have long been strained by deep structural factors that will not disappear simply because the Taliban is in power. According to a report by USIP (completed before the August takeover), “Whatever government ultimately emerges will face a relationship with Pakistan driven by the same themes that have historically defined bilateral ties.”

One of these themes is sovereignty. The disputed frontier, known as the Durand Line, has never been recognized by any Afghan government, including the previous Taliban administration of 1996-2001, and it witnessed frequent clashes and border closures during the U.S.-led war.

There is no reason to believe that the current regime will recognize the Durand Line. Taliban fighters have expressed the view that the Pashtun-majority areas of Pakistan belong to Afghanistan. The Taliban has allegedly disrupted the construction of the border fence that Pakistan has almost completed.

In an interview soon after the takeover, Zabihullah Mujahid said that “Afghans are unhappy and oppose the fencing,” implying that the new regime would not recognize the border, although an official policy has not yet been promulgated. Tensions at the frontier have persisted since August.

Wary of a refugee influx and militant infiltration, Pakistan restricted entry to Afghans at the Torkham and Chaman border crossings, prompting the Taliban to close the latter for weeks. Violence has reportedly flared and commerce has been disrupted as traders face long queues while their produce rots. As a result, Pakistani exports to Afghanistan have plummeted.

It is not just road transport between the two countries that has proven contentious. In October, Pakistan International Airlines (PIA) suspended flights to Kabul, citing interference as the Taliban allegedly intimated its staff and even held one PIA official at gunpoint for hours.

Another possible source of contention relates to U.S. counterterrorism operations. Pakistan has reportedly been allowing the United States to use its airspace to fly aircraft into landlocked Afghanistan. But the Taliban has opposed U.S. drone flights and warned of consequences. By that logic, Islamabad might be seen as complicit in violations of Afghan sovereignty.

Security is another longstanding point of tension. During the former Afghan government, a major concern was Pakistan’s support for the Taliban. Now, it is the Taliban’s links to anti-Pakistan militant groups, including its alleged practice of sheltering the TTP, a claim the Taliban denies.

The Taliban has typically refrained from reining in the TTP, likely because its fighters might defect to ISIS-K if they encounter too much pressure from their hosts. The Haqqani Network is currently mediating talks between Pakistan and the TTP. However, the Haqqanis have brokered negotiations before, and they always failed to bring lasting peace.

Another chronic factor plaguing bilateral relations is the issue of drug trafficking. Narcotics boomed during the U.S.-led war, with the area under opium cultivation more than doubling since 2000. While the Taliban has vowed to crack down on drugs, trafficking seems to be continuing. Large seizures of heroin, meth, and hashish have been reported in Pakistan.

Prior to the Taliban takeover,  it was hoped that political tensions could be eased by energy and infrastructure projects, such as the TAPI gas pipeline or a planned railway from Uzbekistan to Pakistan via Afghanistan. But these initiatives face numerous hurdles, which are further compounded by sanctions against the Taliban.

Moreover, Pakistan has lost influence over the Taliban to Qatar, which hosted the militants’ political office during the war. The Qatari foreign minister was the first such dignitary to visit Kabul after the takeover. Foreign missions in Kabul relocated not to Islamabad, but to Doha. Following its assistance with refugee resettlement, Qatar is now representing U.S. interests in Afghanistan, too.

However, the Taliban interim cabinet contains members of the Haqqani Network, which is close to Pakistan, and relations between the new regime in Kabul and Islamabad have so far avoided the bitter public disputes experienced during the former Afghan government of Ashraf Ghani.

While Islamabad has not yet recognized the new regime, Taliban diplomats have been installed in missions across Pakistan. The border situation has improved somewhat in recent weeks, with restrictions eased at Torkham and Chaman.

It is at least conceivable that Taliban mediation could facilitate progress in talks between Pakistan and the TTP. And maybe a new, updated trade agreement will finally be concluded between the two countries.

But none of this progress is guaranteed. Always lurking beneath the surface is Afghans’ deep suspicion towards their supposedly meddlesome neighbor. As long as those sentiments remain, Afghanistan-Pakistan relations will always be precarious.