Against Russia and China, an ‘Economic NATO’ Is Not Enough 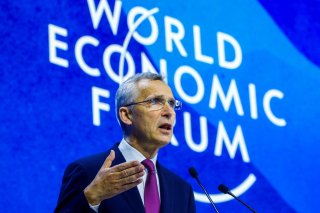 Following the Kremlin’s decision to invade Ukraine, British foreign secretary Liz Truss argued that the G7 should act as an “economic NATO, collectively defending our prosperity. If the economy of a partner is being targeted by an aggressive regime we should act to support them. All for one and one for all.” Clearly, these comments are not specifically targeted at Russia, but also equally directed at the People’s Republic of China. Truss spent much of her remarks decrying a bevy of Chinese policies and proposed that the G7’s trade relationship with China be conditioned to force Beijing to “play by the rules.”

On a trip to Taiwan, Swedish MEP Charlie Weimers stated that recent lessons involving Lithuania show the need for a “NATO for trade” with like-minded countries. Expanding on Truss’ framework, the German Marshal Fund’s Bruce Strokes contended that such an organization should carry out punitive actions such as the policies being enacted to confront Russian aggression against Kyiv in various circumstances, including if China was to invade Taiwan or violate human rights domestically. These comments reflect the centrality of sanctions and geoeconomics in European policy circles, the legitimacy economic coercion has accrued in European eyes since the Russian invasion, and the fact that Western elites are designing a strategy for an era of Great Power Competition—not merely addressing an acute security crisis on their eastern flank.

But the yearning for an economic or trade NATO, as exemplified by the aforementioned statements, points to two divergent but not mutually exclusive visions of what the role of such an institution should be. In the first, an economic NATO would protect the European Union against economically coercive efforts emanating from beyond the union. Anxiety about the economic statecraft of countries like Russia and especially China has been a concern for Western policy communities and sanctions scholars for some time. In the European context, there are already mechanisms that are being devised for this purpose in the form of the anti-coercion instrument proposed by the European Commission.

The second approach is one geared at power projection in the context of Great Power Competition and is aimed toward influencing the domestic and foreign policies of adversaries, including in situations where a NATO or EU member’s sovereignty or territorial integrity is not in question. After all, Ukraine, Taiwan, and the Uighur population of China are not members of NATO.

Over the course of the twenty-first century, Western countries moved away from the export or import control model of sanctions used against the government of Saddam Hussein in the 1990s and toward financial sanctions which leverage financialized globalization and the importance of the dollar and Western financial infrastructure in economic development. The tools for imposing such sanctions against China are already at the disposal of Western states and have been used in a limited and targeted fashion. With regards to imposing sectoral or comprehensive sanctions against Beijing, the problem is not a lack of modalities but rather the fact that sanctioning what is by many measures already the world’s largest economy and the largest trading partner of so many nations would be devastating to the international economy and to the sanctions senders themselves.

When designing sanctions campaigns, practitioners focus on asymmetries. This means that denying regular economic activity should harm the target state more than the sanctioners. In this context, U.S. sanctions designers have increasingly settled on technology sanctions with regard to China. Already, prominent actions taken against Chinese firms like Huawei and proposed actions against Hikvision show the technology focus. The United States and its lynchpin allies still exclusively possess key technologies that are critical to industrial and military development. U.S. sanctions against Russia have reportedly disrupted manufacturing by denying Russia access to semiconductors. Russia actually purchases the majority of its semiconductors from countries like China, Malaysia, and Vietnam, but those are generally less advanced chips used to make cars and appliances while the development of weapon systems, artificial intelligence, and robotics require more advanced semiconductors developed by companies siloed in the United States, Japan, South Korea, and Taiwan.

The consortium that is likely to come to manage such technology sanctions is not analogous to NATO itself but rather the Coordinating Committee for Multilateral Export Control (CoCom). Established in 1949 by the United States and a number of allied states, CoCom was an unofficial organization that was created with the expressed purpose of denying the Soviet Union and its bloc access to strategic military components and dual-use goods. In practice, CoCom, and its anti-China companion, the China Committee (ChinCom), were the primary means with which Washington worked to withhold high-technology goods and “retard the rate at which the Soviet Union continues industrial development and thereby augments its aggressive war potential.” CoCom was even often referred to as NATO’s “economic arm.”

In effect, the United States used CoCom to regulate the economic relationship of its partners with the Soviet bloc. According to the Congressional Research Service, in almost every case, the United States was the most eager to block export while other members, including France, Germany, and the United Kingdom, favored greater economic interaction. Many sanctions scholars still consider this project to have been the most successful influence campaign using economic means in American history. However, Washington’s ability to influence its allies through CoCom began to recede as they recovered from World War II in the latter half of the Cold War, became more economically self-sufficient, and argued for greater East-West trade.

This is the form an organization created to either coerce or contain Moscow and Beijing is most likely to take. After the Cold War, CoCom was succeeded by the Wassenaar Arrangement (WA). But Western countries will likely find WA to be a poor vehicle for these efforts. The WA was formed in the early post-Cold War era to facilitate responsible trade rather than obstruct it and, therefore, provide individual members little means to veto each other’s exports as CoCom did. More importantly, Russia itself was granted membership into WA as a reward for it halting certain military exports to Iran in the 1990s. There is no mechanism for the expulsion of a member. New members can only be added, and reform proposals can only be adopted by consensus. Already, the seeds of an alternative organization can be seen in Western countries partnering with Eastern technological powers such as Taiwan and Japan in their technology controls against Russia and efforts to monitor leakage.

The U.S. government has arranged a new coalition of countries that are imposing new technology export restrictions on the Russian Federation and Belarus. According to the agreed-upon framework, foreign direct product (FDP) rules are individually imposed by each country for “Russia/Belarus and Russian/Belarusian Military End Users (MEUs).” The growing coalition currently includes thirty-seven members including all members of the European Union, Iceland, Liechtenstein, Norway, Switzerland, Australia, Canada, Japan, the Republic of Korea, New Zealand, and the United Kingdom.

This significantly slows down such exports and makes them time-consuming and expensive. Importantly, countries that join this coalition are themselves exempt from requiring such licenses to import the goods and technologies being targeted. So, one can understand why U.S. allies with advanced technology industries that purchase and use U.S. technology and cooperate with American high technology industries would see joining such a coalition as vitally important to their own economic development. Having so many high-tech economies on board voluntarily complying means that the United States can focus its attention on non-participating members like China and India. The threat is that high-technology firms that export high-tech products to Russia may be placed on the Commerce Department’s Entities List and refused U.S. exports.

The United States and the EU have also set up the Trade and Technology Council as has been reported with the official goal of limiting technological exports that can be used for repression. But this organization is expected to also go beyond the formal mandate to limit industrially vital technologies to Russia and China. A working group involving NATO members and G7 members for monitoring sanctions and export controls to Russia can also evolve to serve export control purposes regarding China eventually.

With banking sanctions, America leveraged financialized globalization and conditioned access to the U.S. dollar, the New York financial services community, and the global West-based financial infrastructure (organizations like SWIFT) to force its foreign policy priorities on banks around the world. In the same vein, the United States is in a position to use the development of global supply chains/value chains and its presence in them to influence technological export controls. Financial sanctions or softer measures on the Entities list can also be used to pressure governments and industries far beyond America’s own shores to cooperate. So uneven political commitment from U.S. allies is not necessarily a barrier to their cooperation with American sanctions campaigns.

This trend will certainly accelerate the bifurcation of the technology realm in many ways. It may also be shortsighted. The same de-dollarization concern pertaining to financial sanctions exists here as well. Worried about sanctions risk, Beijing already sees indigenizing key technologies as vital to its economic development and national security. It is also a far more worthy adversary than it or the Soviet Union were during the Cold War. Its potential success could also blunt the force of such sanctions against other targets like Russia and Iran. While some experts have credibly argued that Beijing will not catch up anytime soon, considering how quickly China can develop and scale technologies, it's hard to predict what a determined China can or can’t do in a three to five-year time horizon.