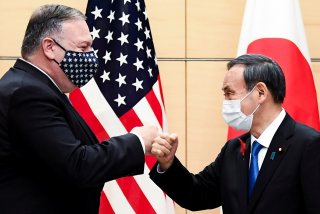 When Yoshihide Suga was suddenly elevated to become prime minister in mid-September, he inherited a daunting agenda: the China challenge, the coronavirus, and the economic recession. That was before he also had to worry about the health of the leadership of Japan’s crucial ally, the United States. Japan’s Prime Minister Suga will hew closely to the Abe foreign and economic policy agenda. Indeed, Suga arguably places greater emphasis than did Abe on the economic dimension of national security.  Beyond the immediate need to emerge intact out of the pandemic, there is the ever-growing competition for high technology and counteracting China’s quest for technological hegemony.

A recent Chinese government directive underscored Beijing’s fixation with creating dominance in “strategic emerging industries,” including critical technologies such as 5G telecommunications, Artificial Intelligence, biotechnology, advanced manufacturing, and new materials. So, while China dropped the slogan of “Made in China 2025,” it is doubling down on and refining the goals of that original industrial strategy first issued five years ago. As a former IT-industry executive and current U.S. Senator Mark Warner observes, China’s strategy to gain technological dominance begins with a ruthless industrial policy of establishing champions. He adds that China also is pulling out all the stops internationally to shape the environment and the standards that favor Chinese companies. All of China’s business comes with strings attached—not just the fact that both the existing and draft revised national security law in China enables the Chinese Communist Party to hijack data and systems as needed. Essentially, China is employing a whole-of-society approach to achieve supremacy in critical technological areas.

For Suga, that means Japan must accelerate efforts to achieve Abe’s vision of a free and open internet built upon trusted technology through cooperation with the United States and like-minded countries. Japan and the United States are already pursuing a virtual 5G platform. Furthermore, Japan’s leading companies are also working with European partners (like Ericsson of Sweden) to create a reliable alternative to Huawei and Chinese-controlled platforms. Japan is also working with an even broader set of partners on establishing common standards.

Suga also wants Japan to achieve a practical framework for steady relations with China.  Suga would like to maintain economic ties while gradually reducing Japan’s dependence on China and diversifying supply chains. In this, he reflects the Tokyo consensus that there is no good alternative. Thus, he will further argue that stable relations between Japan and China are in the interest of all countries, including the United States. Because Japan and China are unlikely to settle their differences over the East China Sea anytime soon, and because Japan is determined to strengthen military deterrence, the main mechanism for tranquilizing China is through economic cooperation.  After all, China is Japan’s leading trade partner, accounting for more than 21 percent of Japan’s total trade, followed by the United States at about 15 percent.  Moreover, although there is heightened wariness about the risk of over-reliance on China, Japan’s foreign direct investment in China more than doubled between 2009 and 2019, rising from about $7 billion to $14.4 billion.

Potential economic cooperation could extend to China’s regional “win-win” economic deals. However, for China the economics are inseparable from the political aim of coaxing other nations to buy into Beijing’s rules. The prime example of this is China’s signature Belt and Road Initiative (BRI), which centers on financing and building energy, transportation, digital, and other infrastructure on land, at sea, and in cyberspace. The BRI is better at branding than transparency.  So, while $1 trillion is a number often associated with the BRI, China is said to have a hand in some sixteen hundred projects in seventy countries with a value exceeding $4 trillion.

Suga is keenly aware that the BRI is not just an economic plan but also a power-play designed to ensure connectivity and dependence on China. However, he places a premium on harmonious relations with Japan’s giant neighbor. Suga may stop short of co-development, but even loosely coordinated efforts in one or more countries would burnish the legitimacy of the BRI.

The announcement of cooperation on regional economic development would be saved for Xi Jinping’s inaugural official visit to Japan. The long-expected visit by Xi probably would have happened around the time of the 2020 Olympics had it not been for the coronavirus. The fact that the Summer Games have been postponed until 2021 provides a new timeframe by which Suga will want to host Xi in the hope of resetting China-Japan relations. China’s Japanese-speaking Foreign Minister Wang Yi has been in Japan meeting with Foreign Minister Toshimitsu Motegi, paving the way for a possible deal.

In regards to the United States, Suga seems to expect Joe Biden to win the upcoming election. There is also an excellent reason to think he and most Japanese would delight in a new government in Washington. President Donald Trump’s transactional browbeating of Korea to pay more for U.S. troop presence, the threat of protectionist trade tariffs imposed on allies as coercive measures, and the lack of U.S. nuance on high-tech policy all suggest Suga would prefer to deal with Biden over Trump. Trumpian diplomatic options appear to others to range narrowly between a blunderbuss and a bullhorn, with far too little mobilization of international hearts and minds and soft power persuasion.

There are also critical issues about international institutions and multilateralism that naturally make Suga eager for a change in U.S. administrations. America’s retreat from the UN Framework Convention on Climate Change (better known as the Paris Agreement) and the World Health Organization (in the midst of a pandemic), re-instills doubts about America’s trustworthiness. Suga and other Japanese are not sure whether the United States will preserve the international architecture and multilateral accords that Washington, with Japan’s staunch support, helped to create.

On top of that, attacking the global trading rules enshrined in the World Trade Organization and withdrawing from the Trans-Pacific Partnership have given China open running room to claim it is the champion of free trade.  As a result, even the Regional Comprehensive Economic Partnership may gain traction, while Japan’s advocacy for the Comprehensive and Progress TPP struggles forward. Trump’s approach to trade has put the United States at uncomfortable odds with Japan’s longstanding support for multilateral mechanisms and the rules-based post-1945 system. The international system is badly in need of a shakeup and reform. But that is where Trump’s style of "America first" and pressuring allies to pay more has backfired; this is particularly the case given Trump’s insistence on blaming China for spreading the coronavirus while denying America’s bungled approach to pandemic public health. All of this is pushing a usually reticent Japan to show its true feelings and lean in for Americans retaking control of their democracy, getting through the pandemic, and restoring trust and confidence in U.S. leadership and values.

Suga starts his tenure with years of experience in helping Abe implement policy and a veteran Cabinet. Some figures remain precisely in their same position as under Abe, including the formidable Taro Aso, who keeps his twin portfolio as deputy prime minister and finance minister; Foreign Minister Toshimitsu Motegi; and National Security Advisor Shigeru Kitamura. Kitamura-san remains in the top position of the National Security Secretariat, having last year replaced very deft Shotaro Yachi, who held the position of national security advisor of Japan from its inception in 2013.

Other members of Suga’s cabinet have assumed different portfolios, most notably

Taro Kono, who moves from defense minister to a new post to help streamline Japan’s bureaucratic red tape. The mandate to implement regulatory reform makes Kono the early front-runner to succeed Suga at some point in the future.

Suga tapped Katsunobu Kato to take his position as chief cabinet secretary; Kato was Abe’s health minister and spearheaded Japan’s response to the pandemic.  Meanwhile, Kato’s deputy, seventy-nine-year-old Kazuhiro Sugita, is another familiar face with a deep background in dealing with the United States. As a former director of the Cabinet Information Research Office, which conducts largely open-source intelligence analysis for the prime minister, Sugita has Suga’s full trust. Nobuo Kishi, a longtime troubleshooter for his older brother, Shinzo Abe, is Suga’s defense minister. Given Abe’s unfinished legacy ambition to normalize Japan’s armed forces, Kishi will play a key role in Japan’s possible acquisition of offensive strike weapons. He will also be a pivotal player in dealing with regional contingencies, from Taiwan to North Korea to the East and South China Seas.

Finally, with just a short break and a new prescription, Abe may return soon as a senior advisor. Recall that some people wrote him off in 2007 when chronic intestinal issues forced him to resign the first time he served as prime minister. He not only made a comeback but, after his second stint in the Kantei from 2012 until 2020, Abe became the longest-serving prime minister in postwar Japan.

In short, Suga is just revving up to pursue Japan’s more independent foreign policy course, albeit one pegged to a strong bilateral alliance with the United States, networked security with other partners, the avoidance of sharp decoupling with China, and a strong and prosperous Japan.