America’s Dependence on China Is a Crisis in the Making 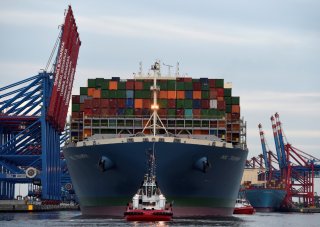 America’s supply chain crisis is far from over. Persistent backlogs at West Coast ports have led shippers to reroute their cargoes to the east. As a result, container ships now sit offshore at ports such as New York, Houston, and Savannah, waiting in queue to offload.

What first triggered the unfamiliar phenomenon of our barren shop shelves was COVID-19 and a series of ill-advised policies implemented to “stop the spread.” Suddenly, there were too few dockworkers, too few warehouse workers, and too few truckers, creating what Lori Fellmer, chair of the ocean committee for the National Industrial Transportation League, called “a horror show.”

But the ongoing problems at our ports and shop shelves drive home an even more disturbing truth: American prosperity and well-being have grown far too dependent on China and the whims of the Chinese Communist Party (CCP).

Not only does China supply a tremendous amount of our consumer and commercial goods, medical supplies, pharmaceuticals, and vital raw materials, but it also controls a huge share of the world’s shipping fleet and commercial shipbuilding capabilities. Beijing’s domestic policies, therefore, exert tremendous influence on both the global shipping industry and the production and distribution of Chinese exports. This creates a double vulnerability for the United States.

According to 2021 United Nations data, China owned 7,318 merchant vessels weighing over 1,000 tons—13.6 percent of the world’s total tonnage. Additionally, 94 percent of all commercial shipbuilding in 2019 was done by just three nations: China, South Korea, and Japan. A war in Asia would imperil these sources of commercial shipbuilding, dramatically affecting international markets and the United States.

In the 1980s, Congress established the Commission on Merchant Marine and Defense to determine the nation’s shipping needs. Its second report to Congress recommended that the nation obtain a fleet of 650 ocean-going cargo ships to meet wartime military and economic needs.

Since then, the American economy has grown 479 percent, and its population has grown 133 percent. But today, U.S.-flagged merchant vessels—the only ones that can be truly relied on in a crisis—number only 180 ships, of which 157 may be militarily useful. That is a mere fraction of what was needed decades ago, when the American market was far smaller.

America’s supply chain problems start on the other side of the Pacific. It’s not just Washington’s COVID policies that are problematic.  China’s “zero-COVID” policies locked down twenty-five cities, most recently Shenzhen and Shanghai, a city of forty million people and the site of many of the world’s manufacturers.

These lockdowns ripple across China, causing logistic shocks at upriver factories on the Yangtze at Wuhan and at ports like Tianjin and Shenzhen, which transship products via Shanghai. This means that products en route to U.S. markets are even further delayed.

While zero-COVID is employed as a rationale for shutting down supply chains, the CCP has shown itself willing to use its industrial might for political purposes, too. The Australians are enduring a steel embargo for bucking Beijing’s South China Sea territorial claims. Filipinos are being punished with a banana embargo for pushing back on China’s encroachment on its Scarborough Shoal. South Korean tourism has taken a hit from Chinese travel prohibitions imposed because Seoul is hosting U.S. missile defenses. And the Lithuanians are dealing with a complete Chinese embargo because they opened a diplomatic representative office using the title “Taiwan” instead of “Taipei.”

The war in Ukraine has heightened supply chain concerns over raw materials like phosphates for fertilizer and neon gas, which is critical in microchip manufacturing. In the wider competition over access to such resources, China has the ships and the economic wherewithal to assure its needs are met. U.S. consumers do not.

This situation is dire because, for too long, agencies like the U.S. Maritime Administration, tasked with securing our access to markets, have been silent or unable to muster needed action.

Today, it is imperative to address China’s use of domestic policies like zero-COVID that can hold international supply chains hostage. A first step is building better resilience into our global supply chains—especially those important to sustaining a wartime economy.

We must also address the potential for China to coerce and intimidate the Filipino and Indian sailors who make up the majority of commercial ship crews keeping the American economy afloat.

Finally, increased domestic shipping and shipbuilding are key to both America’s national security needs and its economy. The American maritime industry must be able to compete globally. This will require setting a policy environment conducive to needed investments and innovation, while working with partners from allied countries to become less dependent on the Chinese supply chain.

The United States needs a larger commercial fleet to remain globally competitive. The nation also needs more shipbuilding and ship repair facilities to ensure access to foreign markets and support the nation and the Navy in times of war. As empty shelves attest, what we have now is woefully inadequate.

Brent D. Sadler is the senior fellow for naval warfare and advanced technology in The Heritage Foundation’s Center for National Defense.