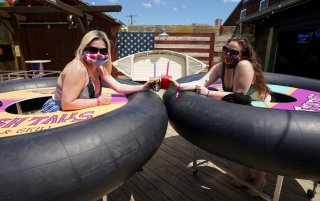 The United States sits at a stubborn plateau of the enduring pandemic. More than 115 million Americans—34.8 percent of the U.S. population—are now fully vaccinated. While a massive feat and deserving of (socially distanced) celebration, the toughest climb is yet to come. Vaccinated individuals do not fully build immunity until two weeks after their final dose and, even then, vaccines are only 95 percent effective. Thus, the United States must keep up its guard as communities try to vaccinate as many people as possible as fast as possible. While vaccines work for individuals who have taken them, vaccines are most successful when almost everyone has one: Reaching “herd immunity,” which occurs when enough people are immune from infection through vaccination or a previous infection—so that the virus dies out faster than it replicates—will ensure case transmissions stay low. Yet as public health concerns shift from questions of supply to demand, and new contagious variants threaten to upend all progress, it is clear that it is too soon to return to normalcy.

With the coronavirus vaccine steadily being administered throughout the nation and in parts of the world, the United States has effectively reached a lull in the sense of urgency. While widespread access to vaccines is certainly a promising feat, the United States still faces a significant journey ahead before the threat of the pandemic is contained. The United States has much to learn from its own missteps and from those of its European partners in effective public health communications and strategy.

Although coronavirus cases and deaths have trended mostly downward in 2021 due to increasingly widespread vaccine access and changes in policy and tone from the Biden administration, case counts plateaued starting in late February to the same unacceptable levels we saw at last July’s peak. In late March, the Center for Disease Control and Prevention (CDC) reported an increase in daily coronavirus cases as states lifted safety restrictions and the novel B.1.1.7 variant, which has become the top source of new U.S. infections, rapidly spread. A “double mutant” variant of coronavirus first detected in India was also found in the United States in early April. While current data suggest that U.S. vaccinations offer protection against most variants, a resistant mutation could derail the move towards herd immunity. European Union (EU) nations are similarly struggling to grapple with the B.1.1.7 strand, which led to a rise in cases earlier this year.

Since the inception of the coronavirus, one constant has been the inconsistency in U.S. and EU responses. Case numbers and the resulting death toll have trended drastically upward or downward as a result of changing policies (see: figures on coronavirus cases and death rates), but never with the kind of consistency of a coordinated international response. The EU practically vanquished the virus last summer, only to see case numbers soar to new heights in early fall, resulting in changed policies to reduce the death toll with stricter lockdown measures that lasted into the new year. Meanwhile, U.S. cases first spiked at the beginning of the pandemic due to the insufficient and delayed implementation of lockdowns and again spiraled out of control over the summer of 2020, reaching unprecedented highs in December and early January, only beginning to fall again in mid-January as vaccines and new Biden policies began to be felt.

These asynchronous trends endure alongside equally unconnected mixed messaging. Within the United States, various states and localities are prematurely rolling back social distancing and mask mandates. Meanwhile, public health leaders insist that these measures are necessary even for those fully vaccinated. Different states are communicating distinct vaccine rollout strategies, making it difficult for health systems to administer uniform national strategies. This gap between public health guidance and current public policy leaves Americans in a state of confusion, helping create a lack of confidence in the vaccines.

The EU’s flawed rollout of the AstraZeneca vaccine provides a helpful lesson as the United States looks forward. Europe has historically seen suspicion around vaccines, with a strong anti-vaccination movement fueled by anti-establishment and anti-science politics. The pandemic has surely amplified anti-vaxxer conspiracy theories in both the United States and EU. However, Europe’s hesitancy in authorizing AstraZeneca, even first restricting its use due to insufficient trials, further fits into a narrative of doubt in science. Disparaging comments by European leaders, including French President Emmanuel Macron calling the vaccine “quasi-ineffective”, only stoked resistance. The European commission hampered the image of AstraZeneca due to a disagreement over delayed deliveries, publicly trashing the firm and in turn undermining public trust. Through ineffective communication, the EU did not debunk misinformation, but rather lent itself to conspiracy narratives, thereby derailing its own coronavirus response.

The U.S. and EU experiences show the need for clear communication, which is a necessary tool in guiding a safe return to “normal.” Moving forward, the United States, including the states, needs to formulate a coordinated public information campaign that provides a hopeful yet realistic message for a tired populace. First, effective communication requires a whole-of-government and -society approach. Civil leaders can help assuage fear and distrust in the U.S. vaccination rollout plans, demystify false claims, and guide safety regulations. States including California have launched immunity awareness campaigns to build public confidence in the vaccine, and the Biden administration shared plans to launch a public information campaign earlier this year. Efforts like this must be coordinated across various government actors to ensure a consistent message; the EU has done so through presenting a united front in pioneering a path out of the pandemic.

Equally important to who communicates the message is what they are saying. Public messaging must highlight progress while sticking to the science. For instance, following recent news of blood clots potentially associated with the Johnson & Johnson vaccine, contextualizing these as rare—dying from a blood clot is more likely to come from the coronavirus than from a vaccination—will help respond to doubts in the viability of the myriad vaccines. Simultaneously, the vaccine must be presented as individually beneficial, incentivizing those who want a return to normal. By clarifying which activities are safe once vaccinated, the CDC can mobilize Americans to get their dose. Just as abstinence-only education was ineffective in preventing the HIV epidemic, solely cautioning which activities to avoid will be insufficient.

An arduous journey lies ahead to curb the coronavirus. Every step is mission-critical, and straying from the path will leave the United States well below the sought-after “herd immunity.” As the nation travels toward its new normal, improving communicating the what and why of vaccinations will provide a roadmap out of the current pandemic.

Julia Siegel is a Program Assistant with Forward Defense at the Atlantic Council’s Scowcroft Center for Strategy and Security.