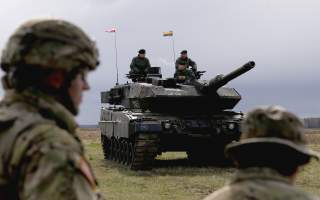 Poland spends about two percent of gross domestic product on the military. That puts it near the top of European members of the North Atlantic Treaty Organization. But it isn’t a serious commitment for a nation which claims to fear invasion and conquest by its neighbor.

In fact, the Poles want America to defend them. Warsaw put a couple of billion dollars on the table toward a permanent U.S. base. Said Polish President Andrzej Duda: “I invite you to post more American military troops in Poland.” Lest the present occupant of the Oval Office miss the message, Duda even offered to name the new facility Fort Trump.

President Trump responded: “The president offered us much more than $2 billion to do this, and so we’re looking at it. We’re looking at it from the standpoint of number one, military protection of both countries, and also cost, a term you don’t hear too often, and you haven’t heard too often over the last twenty-five years.”

Indeed, he appeared to be impressed by the offer. “When a country is very wealthy and when the United States has been protecting them for many years at tremendous cost, it’s time that they helped with burden-sharing.” Moreover, NATO General Secretary Jens Stoltenberg lauded last year’s continent-wide 5.2 percent hike in defense spending. It was the largest real increase in a quarter century, but outlays have fallen dramatically over that same period, resulting in a very low base. Washington should insist on burden-shedding, not burden-sharing.

Stationing troops overseas isn’t cheap. The Pentagon operates multiple bases in different lands, cultures, and economies. It established commissaries, base exchanges, movie theaters, gyms, infirmaries, and schools. It transports and stores military equipment. I’m a military brat. The Air Force sent my family back and forth, along with our housing goods. We enjoyed gasoline at American, not local, prices. Foreign contributions—the so-called host nation support—typically lessens these costs, but Poland’s annual contribution is unlikely to match those of wealthier U.S. allies.

Overseas commitments and facilities made some sense during the Cold War. However, today’s Fort Trump would serve no useful military purpose. Poland does not defend America. Even Europe does not protect the United States. Instead, NATO is defense welfare for Europe.

Washington already rotates forces through Poland and elsewhere in Eastern Europe. Some thirty-five thousand U.S. personnel remain stationed in Germany. Nor does anyone expect a Russian invasion of Poland. The latter’s long, tragic history makes clear that it would fight. A victory would leave a ravaged conquest and yield few benefits. Almost certainly the other members of NATO would fulfill, however reluctantly, their alliance obligations and defend Poland, ensuring Russia’s defeat. Vladimir Putin is an authoritarian leader, but that does not make him stupid.

Granting Poland’s request would be expensive. First, the most significant cost is not unit deployment but creation. That is, defense commitments require force structure. Europe is well able to defend itself. It possesses a comparable economy to America’s and even a larger population. European members of NATO also have far greater resources than Russia, the only plausible military threat. Therefore, the United States should not be expected to put and maintain more men and women into uniform.

Although Congress continues to hike military outlays, such increases are not sustainable. Washington is essentially bankrupt. The 2018 deficit was almost $1 trillion. Next year’s red ink tsunami will breach that barrier. America’s financial future will grow ever grimmer as the Baby Boom generation retires and collects Social Security and Medicare benefits. Forced to balance payments to America’s politically-active elderly and subsidies for Europe’s generous welfare states, U.S. politicians are likely to favor the former.

Increasing America’s commitment also undermines efforts to get Europe to do more. NATO’s European members are skillfully playing the president, praising him for forcing them to hike expenditures. But outlays were already edging up, and the increases are modest. No one believes that countries like Germany will double their outlays, as promised. But this should surprise no one: Germany knows it doesn’t need to increase spending. Despite the president’s uncivil behavior at the last NATO summit, his administration went ahead with plans to spend more money and deploy more troops to the continent’s defense. If European governments look past the president’s unsettling rhetoric, they will realize that it is politics as usual and Americans will continue to pay for Europe’s security.

Finally, creating Fort Trump would heighten the confrontation with Russia. Of course, Vladimir Putin is a tough customer and Russia is an unpleasant player. But that doesn’t mean Moscow doesn’t have cause for viewing the West through hostile eyes. Russia’s grievances include the expansion of NATO up to its borders, violation of allied promises not to so advance, dismemberment of Russia’s old ally Serbia, support for the overthrow of friendly neighboring governments, and military aid for Moscow’s antagonists. One can defend all these policies, of course, but if Russia had engaged in similar behavior in Canada or Mexico, Washington would have reacted with both hostility and vigor.

Placing a U.S. military facility on Russia’s border would go a step further and be viewed, correctly, as ostentatiously threatening. Doing so almost certainly would end any illusion that Moscow will cooperate with Washington on much of anything: negotiated settlement to the Ukrainian imbroglio, a political resolution for Syria, support for American objectives in Afghanistan, or enhanced pressure on North Korea.

Putin is doing badly at home. But a clear, unprovoked, aggressive U.S. military advance would help stoke nationalism to his benefit. It would reinforce his argument that Moscow needs strong leadership. A Polish-American base would push his government ever closer to China, even though the two nations have little in common other than antagonism toward America’s dominant global role. Indeed, Washington’s unintended reversal of Richard Nixon’s successful effort to widen the split between Russia and China may be the greatest failure of U.S. foreign policy in recent years.

Today Russophobia consumes Washington. Neoconservatives and reflexive hawks continue to dominate Republican foreign policy, despite successive disastrous interventions in the Middle East. Democrats who once preached moderation toward the Soviet Union see anti-Russian sentiments as a political tool against Donald Trump. The combined result is to push Washington toward a new cold war.

Yet the demonization of Moscow is both unprincipled and dangerous. Washington has valid complaints but should drop the sanctimony. The Saudi murder of exiled journalist Jamal Khashoggi dramatically illustrates how many American allies violate human rights with great enthusiasm, equal to that of Moscow. As for interfering with the U.S. election, Washington did the same in more than eighty post–World War II votes, including Russia’s 1996 contest. The administration should demand that Moscow stay out of American politics while promising to do the same for Russia.

On the military side, Moscow retains an equivalent nuclear arsenal, which requires that America take it into account. There is no conventional parity, however. Russia desires respect and secure borders and has few global plans and no ideological pretensions. There is no conflict between America and Russia over vital interests, and Moscow could do little to threaten those interests if serious conflicts existed. Russia is no substitute for the Soviet Union.

Instead of stoking bilateral conflict, Washington should seek peaceful compromise with Moscow. The starting point for any such modus vivendi should be to cease making gratuitous military threats, such as putting U.S. troops permanently on Russia’s border. Turning down the proposal for Fort Trump would be a first step toward finally establishing the president’s “America First” foreign policy.

"Playing Fort" in the South China Sea and Spratly Islands