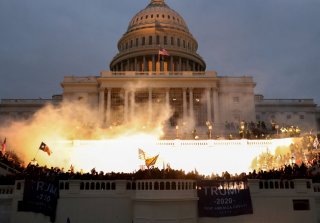 WHERE WILL the deep divisions in American society lead? Violent acts of insurrection have already taken place, the most serious of which was the January 6, 2021, attack on the national capitol. Could violent civil war happen again in America? If so, what form might it take? Several recent publications have assessed the general causes of civil wars and seek to use these assessments to analyze the risk of large-scale armed civil conflict in the United States today.

A look back at the specific causes of the 1861–1865 American Civil War may shed additional light on these questions. Historians have long debated the causes of the American Civil War, focusing primarily on slavery and secession. The war clearly began in response to decisions by Southern states to secede from the Union and Abraham Lincoln’s decision to resist. Slavery was the key underlying issue, coupled with the South’s fear that in November 1860 abolitionists had irrevocably turned the political tide against their slavery-based economic system by electing Lincoln, whose Republican Party was committed to stopping its spread to new states. Underlying this is a more complex set of interrelated factors that might help to assess whether another American civil war is possible. The road to the American Civil War might be analyzed as developing in three distinct stages. Those stages then can be used to contrast nineteenth-century events with unfolding events in America today.

IN STAGE 1 (from 1776 through 1850), systemic cultural divisions emerged between the North and South that can be traced in part back to early immigration patterns during the colonial years. For example, religious British Puritans populated the Yankee North and royalist Cavaliers populated the Tidewater region. While the 1787 Northwest Ordinance banned slavery in territories north of the Ohio River, the U.S. Constitution ducked most of the issues that eventually led to the Civil War, with many founding fathers believing that slavery would soon naturally fade away. But the invention of the cotton gin in 1793 and new textile manufacturing techniques in Europe created the potential for great wealth for plantation owners using slave labor to pick cotton. At the same time, the industrial revolution was centered in the North and created wealth for manufacturers.

These divergent methods of wealth creation thus emerged between North and South, prompting differing lifestyles, cultures, views on free trade and tariff policies, and perspectives on the right of states to secede. Slavery was justified by Southerners as benign and benevolent while the abolitionist movement was still relatively nascent in the North. The states that shared similar views were within the same geographic region and were contiguous, creating the potential for geographic division.

The Constitution was relatively silent on the right of states to secede from the Union. The prospect was raised frequently during the country’s early history in various places: in the 1791–94 Whiskey Rebellion, in the 1798–99 Virginia and Kentucky Resolutions, in Aaron Burr’s 1804-07 Western conspiracy, in New England before and during the War of 1812, and in the 1832–33 Nullification crisis. The nominal right to secede was thus not solely a Southern concept.

Yet secession was kept in check during this stage by a combination of strong federal leadership and statesmen willing to compromise. During the Whiskey Rebellion and the Nullification Crisis, George Washington and Andrew Jackson respectively either used or threatened the use of force to maintain the Union. This was supplemented by a series of national compromises, designed by statesmen like Henry Clay and later Daniel Webster. These include the Missouri Compromise of 1820, the nullification compromise of 1833, and the Compromise of 1850 (which diffused secessionist fervor created by the 1846 Wilmot Proviso). In addition, the U.S. military during this stage was still fairly unified, fighting together in the War of 1812, the early Indian Wars, and the Mexican-American War.

It was during this first stage that the demand for cotton began to soar. With cotton picking being a labor-intensive proposition, the Deep South’s use of slaves enabled it to become the world’s leading producer, and capital flowed into the sector to exploit phenomenal returns on investment. Trade in human beings from North to South swelled. Expectations that slavery would fade were shattered, and Southern states’ economies, with some exceptions, became vitally dependent on slavery. At the same time, societal alienation remained subdued. Generally speaking, Southerners did not feel that the rest of the country seriously threatened their right to own slaves.

STAGE 2 (1850 to 1860) began with the growing importance of cotton in the South and growing abhorrence of slavery in the North. It was an unstable period of growing distrust, but Southern elites still widely believed that their culture could survive within the Union. By 1850, the U.S. cotton trade accounted for 60 percent of all American exports and nearly all Southern exports. The slave trade became even more pronounced and atrocious, with families readily broken in order to single out the best potential to pick cotton. In addition, masters resorted to whipping field workers who failed to meet targets, which were as high as 200 pounds per slave per day. And newly acquired territories became more important to the South—not only to keep political balance in Washington but also because Southern soil was faltering due to excessive use. The flagrantly inhumane treatment of slaves in the South stimulated the abolitionist movement in the North. Previous compromises on the territories that had kept the peace for decades were reversed with the Kansas-Nebraska Act and Dred Scott decision. Regional alienation grew and spread.

Notwithstanding these trends, events in the 1850s strengthened the South’s political position within the Union. Four weak or pro-Southern U.S. presidents, brutal enforcement of the Fugitive Slave Act, the 1854 Kansas-Nebraska Act, and the 1857 Dred Scott decision all gave Southerners the sense that the status quo could endure despite tensions. Jefferson Davis served as the American secretary of war under Franklin Pierce. Stephen Douglas tried another compromise with the Kansas-Nebraska Act, but repealing the Missouri Compromise and allowing popular sovereignty to decide whether slavery would be allowed in those territories ignited conflict there. At least initially, Southerners saw it as a victory. The Dred Scott decision favored the South: it denied Scott his freedom and also allowed for slavery in all American territories. Southerners did not see slavery as doomed, and interest in secession was inchoate.

These same events created outrage in much of the North. The abolitionist movement, which started around 1830, became a major regional force in the 1850s. Add to this the wide circulation of Uncle Tom’s Cabin and effective abolitionist leaders like Frederick Douglass, Sojourner Truth, and William Lloyd Garrison, and slavery became a dominant moral issue in the North. But even as the North became more indignant and intolerant of slavery, the South grew more reliant on its extraordinary profitability.

Other factors led to the growing sectoral divisions during this stage. An extremist press on both sides exacerbated sentiments. Intra-regional cultural affinity increased as railroads stitched like-minded regions together. The Northern population grew rapidly due to immigration from Europe, creating demographic pressures disadvantageous to the South. The two-party system collapsed, causing wild political swings and a resulting shift in existing political orientations.

Limited violence was not uncommon between the sides during this stage. Bleeding Kansas saw atrocities on both sides. The 1856 caning of Senator Charles Sumner by Congressman Preston Brooks brought violence into the U.S. Senate Chamber. And John Brown’s 1859 raid on Harpers Ferry stimulated admiration in the North and fear of slave revolts in the South.

Despite these hardening political positions, the lack of willingness to compromise, and growing contempt and political violence, most principal actors on each side in Stage 2 still saw a path for survival within the Union. Extreme leaders emerged, but moderates stayed in control. In essence, alienation had grown sharply, but Northern and Southern goals were not yet necessarily irreconcilable.

STAGE 3 (November 1860 to April 1861) consisted of a rapid and decisive existential crisis for the South and North. Events reached a tipping point and quickly spiraled out of control. The fragmentation of the Democratic Party in particular led to the subsequent election in November 1860 of Abraham Lincoln by less than a 40 percent plurality, which was considered illegitimate in the South despite a clear electoral college victory. Several last-minute compromise attempts failed. For example, a complex set of proposals designed by Senator John Crittenden failed because it permanently legalized slavery south of the Missouri Compromise line, reinforced the Fugitive Slave Law, and allowed the slave trade in the District of Colombia. The South’s winning political position from the 1850s shifted overnight, with no apparent prospect of a sustainable compromise. This created both panic and resolve in those Southern state economies most reliant on slavery. Lincoln’s position on the future of slavery in the territories (and thus subsequent states) appeared to threaten the long-term viability of the relatively secure national political position that the South had enjoyed up to that point. Suddenly, Southerners felt that they could no longer manage their future or preserve their way of life within the existing federal structure. Southerners, especially cotton growers, became acutely defensive, politically and psychologically.