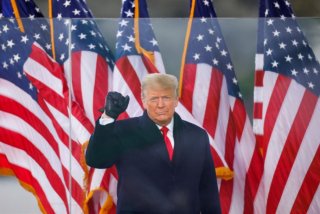 My Twitter account’s “pinned tweet” is one that says Trump would have elevated his reputation if he had conceded the election quickly; it concludes “now people just hope he croaks.” The tweet is dated Jan. 4, 2021—so elevating the tweet is admittedly a kind of virtue signal: I am not the kind of Trump guy who backed his post-election antics, and I’m pleased to have made that clear two days before what one writer aptly called the cornpone intifada.

But the “people just hope he croaks” line is too vague. The sentiment is shared by never-Trumpers and no small number of once pro-Trump activists and intellectuals who generally approved of his stated policy goals, only to experience a dysfunctional administration that accomplished little. As Ann Coulter (an early and vital Trump supporter) memorably put it, Trump is the opposite of a duck, flailing madly and going nowhere instead of moving quietly ahead in the water.

But it is not shared by Joe Biden, most elected Democrats, and the huge interlocking liberal complex of that makes up the mainstream media: for them, Trump is the best thing ever, someone they can portray effectively as a buffoonish fascist wannabe, while he remains an ineffectual foe with no real sense of how to use power. He is the essential glue and greatest hope of the Democratic coalition, and probably the only Republican a Democrat could defeat in 2024. Indeed, if the Democratic primary electorate moves leftward, as well it might, Trump could conceivably lose to Alexandria Ocasio Cortez, ushering in authoritarian socialist rule in the United States by free election.

Of course, Trump is a useful foil to Biden, whose aging communication skills revive when speaking of his 2020 adversary. But the fixation on Trump and January 6 envelops the whole party. How many times a day does one hear—from the lips of a Democratic official or a CNN or NPR commentator—that piously pronounced phrase “our democracy” to connote all that the January 6 rioters and Trump purportedly threaten. The phrase feigns a reverence to American constitutional practices, which is why Democrats are so enamored of it. But almost invariably it is coupled with transformative action agenda that is the very opposite of constitutional regard: ending the filibuster, packing the Supreme Court, the replacement of an “Election Day” where self-governing citizens go to the polls and vote by a rolling election period dominated by mail-in ballots and vote harvesting by activists. Such proposals are self-evidently designed to precisely subvert the mechanisms the Founding Fathers intended to encourage: gradualism and the need for decisive majorities to enact major changes into “our democracy”—in other words, to undermine precisely the institutions which have made the United States arguably the most successful long-standing democracy in the world.

Writing for Unherd, Simon Cottee makes some comparisons between the way neoconservatives deployed September 11 as a lever for their long term agendas of war in the Middle East and the way contemporary Democrats are trying to use January 6.  But if the goals of the neoconservatives were fairly tightly focused on the invasion of Iraq (and perhaps later Iran), those of today’s liberal establishment are diffuse: for some they involve jettison of the checks and balances built into the American system, for others simply a means for the relegation of every aspect of Trumpism—including the policy aspirations which remain broadly popular –permanently into a realm of deplorable moral oblivion. In actuality, January 6 was a riot involving a few hundred mostly unarmed people whose breach of the Capitol was made possible by almost unfathomably poor preparation by riot control police (a critical factor about which we would surely be hearing much more if Trump and his administration bore responsibility for it). The Democrats seek to turn it into world historical “insurrection” whose nefarious meaning must be contemplated “every day,” as the New York Times somberly admonishes.

For the Democrats, every day that we talk about January 6 is a day where we are not talking about soaring rates of crime brought about by the progressives’ war on cops, or inflation accelerating to 1970s levels, or the months of rioting, egged on by prominent Democrats, including then candidates Biden and Kamala Harris, that followed the George Floyd killing—rioting far more deadly and destructive than January 6. And every day of January 6 is a way to keep Trump in the spotlight, and in a way keep his persona central to the Republican Party. It’s a goal which corresponds perfectly with Trump’s own insatiable quest for the limelight; He seems to believe, perhaps correctly, that if he had (as he should have) conceded that he lost the election, albeit one held under unusual covid circumstances, his role as a future party leader would be diminished.

This reinforcing mutual self-interest of two camps—the Democratic establishment and Trump himself—now constitute a real force in American politics, and possibly a barrier to any kind of enlightened leadership emerging from Republicans for the 2024 presidential race. The easiest way out one doesn’t want to say out loud, but it does involve actuarial tables and the fickle finger of health.