Attack of the Blob: Why America’s U.S. Foreign Policy Has Been Crippled 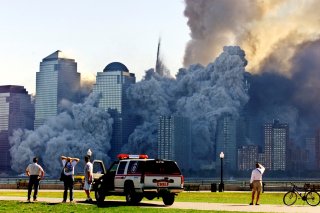 It looks like the foreign-policy “blob” is starting to fight back. The bipartisan globalist national establishment is being blamed both for President Joe Biden’s hellaciously botched withdrawal from Afghanistan, for pushing the transformation of a necessary anti-terrorist operation into a naively grandiose nation-building project.

It’s time, the argument goes, to marginalize—or at least view more skeptically—this hodgepodge of hacks, which includes former diplomats and congressional aides, retired military officers, genuine academics, and think tank types. It has shaped U.S. diplomacy in two critical ways. First, members of the blob have been used as the main personnel pool for staffing presidential administrations and House and Senate offices on a rotating basis, serving as informal advisers to these politicians. Secondly, they have dominated the list of sources used by overwhelmingly sympathetic journalists to report and interpret the news. Thus, they are defining for the public which foreign policy ideas are and aren’t legitimate to discuss.

Members of the blob have been shouting things like, “Don’t throw the baby out with the bathwater!”

Washington Post pundit Max Boot similarly has declared that “we can confidently say that, overall, the foreign policy establishment has served America well over the past seventy-six years.”

In other words, look past Afghanistan, Libya, Iraq and Vietnam as well as the failure to anticipate the September 11 terrorist attack. Look past the long-time cluelessness about the emergence of security and economic threats from China, which followed the stubborn, decades-long determination to antagonize China after 1949. Look past the peacekeeping debacle in Somalia, the Bay of Pigs fiasco, and the blind loyalty to an Iranian Shah hated by nearly all his subjects. Focus instead on all the—presumably more important—successes.

Paramount among these is the victory over the Soviet Union in the Cold War. This victory includes the protectorate-alliances, foreign aid, and open trading system that keyed this triumph. Such things were made possible in the process of pacifying and democratizing Germany and Japan, which fostered the recovery of these former enemy dictatorships as well as the rest of Western Europe. As a result, there were decades of record prosperity in these regions.

One obvious rejoinder: today’s blob and its most recent forerunners merit zero credit for those achievements because almost none of its members simply weren’t around or in power then. Meaning maybe America simply needs a more competent blob?

At the same time, there’s inevitably been personnel continuity in the blob’s ranks over time. Moreover, today’s establishment was largely groomed in blob-y institutions, claims to be acting in that original blob-y tradition, and has clearly remained stalwart in its advocacy of tireless international activism, and support for what it calls the liberal global order and its constituent institutions created by the older blob generation. As a result, including those decades-old developments in judgments of today’s blob is eminently defensible.

And in retrospect, what’s particularly revealing but neglected about these achievements is the extent to which they stemmed from circumstances almost ideally suited for foreign policy success, rather than from a blob-er genius. Globalists of the first post–World War II decades unquestionably faced serious domestic political obstacles to breaking with the country's historic aloofness to most non-Western Hemispheric developments.

But they also enjoyed enviable advantages. Especially important was global economic predominance, which blunted much criticism on the home front by permitting subsidization of both the security and well-being of enormous foreign populations without apparent cost to American living standards or national finances.

It’s no coincidence, therefore, that as this advantage eroded, and the core blob tactic of handling problems literally by throwing money at them and refusing to choose between guns and butter became more problematic, the blob’s record worsened. Its actions undercut the intertwined domestic political and economic bases of active and passive public support for its strategies.

In fact, post-Vietnam, it’s difficult to identify any important foreign policy decision that blob-y leaders have gotten right, or even handled reasonably well, with the exception of the first Persian Gulf War. For example, Ronald Reagan’s dramatic military buildup certainly helped spend and innovate the Soviets into collapse but it was opposed by many members of the blob who favored continued containment and the simultaneous pursuit of arms control and detente.

Just as important, this blob’s very profligacy meant that many of its biggest post-Vietnam failures were economic in nature. There are two leading examples. The first is the messy collapse of the early World War II international monetary system and structural inflation and long sluggish growth that followed. The second is the 2007–09 global financial crisis and the ensuing Great Recession.

Both crises were brought on fundamentally by global financial imbalances stemming from the stubborn refusal of the blob to support even minimal budget discipline on the foreign policy side. They were also fueled by its failure to require reciprocal market access for traded goods either in the early post–World War II Bretton Woods monetary system or into its patchwork successors. Both revealed the blob’s obliviousness to the intertwined imperatives of maintaining the national economic power needed to responsibly pay for preferred policies and to defining U.S. interests. This obliviousness left it incapable of avoiding needless costs and addiction to debt, inflation, or both.

Do today’s attacks mean that the blob’s demise is in sight? That’s unlikely. After all, it has survived its decades-long string of blunders with its status pretty much intact. It is bound to be replenished by the same elite universities whose relevant faculty members are overwhelmingly blob-y themselves. There’s no sign that their corporate funders are backing away from the think tanks that keep many of its members employed when they’re out of public office. And its record will surely keep being reported principally by a news media that’s rather blob-y itself. That might leave a foreign policy catastrophe inflicting lasting damage on America as its best hope for replacing the blob even with simply a more genuinely diverse source of experience and expertise.

Alan Tonelson is the Founder of RealityChek, a blog on economics and national security, and a columnist for IndustryToday.com.