Azerbaijan’s Aliyev is a Strategic Liability, Not an Asset 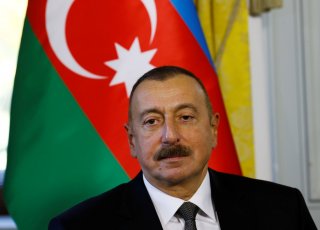 Ilham Aliyev, President of Azerbaijan for nearly eighteen years, sits atop a mirage. Azerbaijan’s capital Baku exudes wealth. Luxury boutiques like Bulgari, Christian Dior, Gucci, and Trussardi line Neftchiler Avenue across Primorsky Park from the Bay of Baku. Luxury hotels like the Four Seasons, Marriott Absheron, and the Hilton Baku overlook the cornice. Car dealerships showcase the latest Rolls Royces, Lamborghinis, and Ferraris. Azerbaijan is hardly the only country to sport such an ostentatious display—Persian Gulf emirates do as well—but the wealth extremes among Azeri citizens are greater, as anyone who has bypassed the official tours to see the mudbrick houses and shantytowns outside the capital can attest. While those associated with the Aliyev family and his inner circle might afford Baku’s luxury goods, most city residents, including the educated and professional class, barely scrape by. Travel an hour or two outside the capital, and the situation is even worse.

Azerbaijan is among the world’s most corrupt countries; Transparency International ranks Azerbaijan with Russia, Mali, and Malawi. In contrast, neighboring Armenia sits alongside Greece and Slovakia in the rankings, while Georgia scores even better. The recent Pandora Papers exposé showed that family members of senior Azeri officials had bought or sold tens of millions of dollars of luxury real estate.

Why the West Ignores Azerbaijan’s Reality

Western states have ignored Aliyev’s corruption and repression for a variety of reasons:

Israel, meanwhile, has long-standing ties with Azerbaijan that are rooted in the arms-for-energy trade. During last year’s Nagorno-Karabakh war, Azerbaijan used Israeli drones against both civilian and military targets to turn the tide of the war after ethnic Armenian forces in Nagorno-Karabakh rebuffed the initial Azerbaijani invasion.

Traditionally, both Israel and the United States also value Azerbaijan for its strategic location and willingness to allow espionage, if not full-fledged operations, against the Islamic Republic of Iran. While the mostly Shi’ite Azerbaijan once sought to distinguish itself from theocratic Iran to its south, in recent years, Aliyev has played the issue both ways: coasting on Azerbaijan’s past reputation while increasing his ties with Iran (and Russia), recent disputes with Tehran notwithstanding.

Azerbaijan’s reputation for religious tolerance and secularism also attracts many Western supporters. Certainly, Azerbaijan deserves praise in this regard, though the myth does not live up to reality. While Azerbaijan has generally protected its Jewish community, Aliyev’s government has long targeted Azerbaijan’s Christians, in some cases by erasing centuries-old cultural property like the graveyard in Julfa that Azerbaijani troops systematically destroyed. More recently, Aliyev’s cooperation with and tolerance for Syrian jihadi mercenaries, whom he used in his fight against Nagorno-Karabakh’s Armenians, raise questions about his outlook. In many ways, Aliyev appears to be taking a page from Turkish president Recep Tayyip Erdoğan’s playbook: Distract the West with paeans to the secular past while quietly co-opting, if not promoting, religious extremists to act as policy proxies. When countries have embraced such tactics, the result has been blowback that harmed the standing of religious minorities. Azerbaijan’s subordination of its foreign policy to Erdoğan’s—even allowing Turkish diplomats veto power over Azerbaijani engagements—should raise questions about Baku’s tolerance and the ability of Israel and the United States to leverage Azerbaijani territory for other strategic pursuits in the near future.

Beyond the strategic reasons for ignoring Azerbaijan’s reality, there is also the reality of caviar diplomacy and golden parachutes. Azerbaijan pays well. The regime spends lavishly on gifts, luxury hotel suites, and dinners and provides access to those who parrot official positions and, more importantly, refuse to research or consider counterarguments. Some Israeli officials openly talk about how they hope to enter the Azerbaijani business scene after retirement. Former American officials might be more discreet in what they say, but their actions do not substantively differ.

Aliyev’s orientation should raise questions for any honest analyst, but, what really makes Azerbaijan a strategic liability, is Aliyev’s increasing unwillingness to live within Azerbaijan’s borders. This problem goes beyond disputes with Armenia over Nagorno-Karabakh, the contested territory recognized by most countries as Azerbaijani territory, and extends to Aliyev’s territorial claims over Armenia proper, which the Azerbaijani dictator has increasingly voiced over the past decade.

For example, on November 20, 2012, Aliyev said, “Armenia as a country is of no value. It is actually a colony, an outpost run from abroad, a territory artificially created on ancient Azerbaijani lands.” The following year, Aliyev gave a speech in which he promised not only to retake Nagorno-Karabakh but also all of Armenia. “Azerbaijanis will live on their historical lands in the future. Our historical lands are Irevan [Yerevan] and Zangezur regions,” he said. He returned to this theme on January 22, 2014, during a visit to Ganja, Azerbaijan’s second-largest city, when he described Armenia as “historical Azerbaijani lands” that his countrymen will eventually regain. While Minsk Group diplomats pushed a land-for-peace and security deal, Aliyev promised Azeris that an Armenian withdrawal from Nagorno-Karabakh and the adjacent districts would only be the first phase of a final solution.

At Nowruz celebrations the following year, Aliyev tripled down on the theme. “The Armenian-Azerbaijani Nagorno-Karabakh conflict must be settled only within the framework of Azerbaijan’s internationally recognized territorial integrity,” he said, then added, “after that, we will return to our ancient lands—to Yerevan, Geicha, and Zangezur.”

While successive secretaries of state took Aliyev at his word when he promised to settle his disputes with Armenia diplomatically, Aliyev did not try to deceive his home audience. Speaking in the central Azerbaijani district of Terter in December 2016, he explained, “Today, we are not claiming any in the modern Republic of Armenia. We do not intend to reclaim Yerevan, Meghri, Goris through military force but I’m sure that time will come, and we, Azerbaijanis, will return to all our historic lands,” He then promised, “The main factor [for success] is strength. This is true. We live in the real world. So we have to become even stronger, to create a more powerful army.”

In recent years, especially as his economy has stagnated or declined against the backdrop of falling oil prices, Aliyev has increasingly turned toward revanchist claims to distract the public from his own mismanagement. During a speech to his New Azerbaijan Party, for example, Aliyev claimed that Yerevan, the territories of Lake Sevan, and the province of Syunik, also known as Zangezur, are historical Azerbaijani lands and that their return was a “strategic and political goal.” During a Baku military parade after the Azeri victory in the most recent Nagorno-Karabakh war, Aliyev called Yerevan, the capital of Armenia, as well as Armenia’s Syunik and Sevan regions “historical lands” of Azerbaijan. Such rhetoric dashes hopes for peace. Just last month, Aliyev threw cold water on Armenia’s request for talks about the status of Nagorno-Karabakh, warning Armenians that they should refrain from raising the subject since Azerbaijan has more historical grounds for claiming parts of Armenia like Zangezur and Lake Geicha.

It is one thing for Azerbaijan not to have diplomatic relations with Armenia—that can be rectified—but it is quite another to reject Armenia’s right to exist.

Family fiefdoms seldom succeed in countries without formal, institutionalized monarchies. Egyptian President Hosni Mubarak fell when he tried to promote his son to power. Likewise, Muammar Gaddafi fell as he tried to have his son Saif succeed him. Hafez al-Assad’s son Bashar did come into power, but Syria ultimately paid a far higher price as it descended into civil war.

For dictators, the problem with multi-decade rule is that political scapegoats are in short supply. For example, Erdoğan cannot blame his predecessors for the corruption and economic mismanagement that drained Turkey’s foreign reserves and crashed its currency. For all of Azerbaijan’s hydrocarbon wealth, the per capita income of Azerbaijanis is actually less than that of Georgians and Armenians, the latter of whom subsist under a Turkish-Azerbaijani economic blockade. While the citizens of Gulf emirates arguably accept a contract in which they sacrifice freedoms for wealth, the comparison between the Gulf states and Azerbaijan falters because ordinary Azeris receive little in exchange for political pliancy.

Azerbaijan now faces a perfect storm. As Aliyev seeks to promote his wife and son to succeed him, ordinary Azerbaijanis grow increasingly frustrated with their plight. They also see the cost of Aliyev’s Nagorno-Karabakh victory: infringement on Azerbaijani sovereignty by Russian and Turkish troops. Aliyev sponsors trips for foreign officials and some Azeris to recaptured areas of Nagorno-Karabakh, but few Azeris who originate from the territory are prepared to return permanently, given the region’s lack of jobs and their new roots in and around Baku. In effect, Aliyev wants to spend billions of dollars on infrastructure and Potemkin ghost towns that few Azeris want to reside in permanently during a shaky time for  Azerbaijan’s economy, the rise in oil prices notwithstanding.