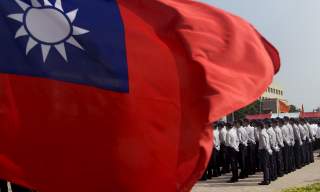 Gordon Chang’s recent retort in our continuing debate about Taiwan policy opens a window on much that is wrong today about contemporary U.S. foreign policy. His approach is evidently to “escalate to deescalate” (my characterization), breaking with decades of decently moderate U.S. policy, and dramatically firm up the American defense commitment to Taiwan, so that the “U.S. will consider an attack against Taiwan an attack on itself” (his characterization).

Not only is this policy recommendation completely contrary to obvious changes in the military balance in the western Pacific—a subject once again ignored in Chang’s response, but such a policy change would result in a dramatically intensified Cold War with China, and quite possibly a near-term hot (nuclear) war with China as well.

The twin nefarious ideas undergirding Chang’s approach to the world are that rising powers need to be hemmed in at every possible opportunity and also that democracies everywhere (and even on the other side of the planet) need to be protected by the United States to the maximum degree. These neoconservative precepts might be termed as a “maximalist” or “dominance” based foreign-policy approach. To understand why that approach is so dangerous for U.S. national security, please carefully read the concise and cogent analysis of combat veteran Daniel Davis from this forum published a few days back. Davis leads with the contention that “Currently, America taunts China by taking needless risks [and] . . . extends military guarantees to small countries that could drag us into a war we should never fight.” Chang advises doubling down on precisely these specious and gravely dangerous approaches to U.S. national security.

Chang’s ahistorical and radical proposal to deal with the Taiwan issue is ideologically suspect, to be sure, but also utterly infeasible from an economic and strategic perspective. Yet somehow, this general strain of thinking gets surprising support in the mainstream foreign policy and media establishment. Before entertaining Chang’s actual arguments (that interestingly say little about Taiwan), I will once again note that there are some things Chang and I do actually agree about. We seem to agree that personal attacks and slinging epithets is not in the national interest—especially given that our national discourse on strategy is already fraught in the extreme. We both evidently admire Henry Kissinger. We are seemingly agreed that the Korean War was a tragedy that cost the lives of thirty-six thousand brave Americans with many more grievously wounded physically and psychologically.

I know something about that war. Just over six months ago, I was myself at a border and staring wide-eyed into North Korea, pondering that tragedy almost seven decades hence. On the same trip, I spent an entire day at the Korean War Memorial museum in Seoul. I studied the names of those from my home state who never returned. A few weeks ago, I conducted an interview with a ninety-four-year-old Korean War veteran, who was involved in the Chosin Reservoir campaign, and he recalled with sharp bitterness how American soldiers froze and even starved to death, because they were inadequately prepared and poorly supported. Indeed, the main lesson of that conflict, contrary to Chang’s analysis, is that the U.S. military should not be thrown carelessly into nearly impossible situations for which it is utterly unprepared by a political establishment that fails to make tough choices or grasp simple military realities, such as basic logistics challenges. I have argued previously that the logistics challenges that U.S. forces would face in a contemporary Taiwan scenario are actually far more daunting than those that confronted U.S. military personnel in the Korean War so many years ago.

Chang states in his first paragraph that I have “misread Taiwan’s history.” But in a classic sign of a weak debating position, he fails to describe my mistakes and attempts to deflect by not talking about Taiwan, preferring to discuss Korea and Kuwait. In a tortured twist of logic, moreover, he claims that my suggestion about more defensible and more restricted “red lines” would prompt escalation and U.S. involvement in an unwanted war. He fails to note that the very definition of a U.S. red line is that Washington would choose not to enter any war unless the line were crossed. But the drawing of red lines was never a central part of my argument. I am generally in favor, realizing that such an approach can have some costs, including momentary instances of instability. Still, that is much preferable to the situation that currently prevails, wherein Washington is committed to defending simultaneously everything (including seemingly each and every reef across the Asia-Pacific) and nothing in a situation of “deliberate ambiguity.” Any new American red line drawn across the Pacific region should be wholly defensive in nature (e.g. the home islands of Japan and the Philippines) and thus feasible in its defense requirements. As to Kuwait, April Glaspie and all of that: nearly three decades after that “great war,” (apparently a true favorite of neo-conservatives) which can be indirectly viewed as a cause of the 9.11 attacks, I doubt many Americans are very pleased with the lamentable legacies of our continuing commitments in the Persian Gulf region that resulted from the original war over Kuwait.

But let us please focus on Taiwan. There are two false premises at the heart of Chang’s argument in favor of breaking with current policy and extending an iron-clad U.S. security guarantee to Taiwan. The first false premise is Chang’s assurance that deterrence will succeed. In Chang's bizarre thinking, Beijing will be intimidated by American determination and capabilities, causing them to reconsider their historical claim—in effect, to cease barking and lie down for a belly scratch. Yet much more likely is that the barking dog will be sent into a paroxysm of rage with unexpected consequences. At a minimum, this would likely mean an irreparable break in U.S.-China ties (perhaps including the cutoff of diplomatic relations) and the doubling or tripling of Chinese military expenditures and related deployments. China may additionally opt to “pull off the gloves” and start actively undermining U.S. interests around the globe, whether on the Korean Peninsula or in the Middle East. Selling Iran advanced anti-ship missiles (e.g. YJ-18 / DF-21D) could be just one unfortunate countermeasure, while another could be active Chinese support for the Taliban in Afghanistan.

At worst, of course, such an announcement might prompt the PLA to actually pull the trigger and initiate direct military action against Taiwan. Here, Beijing’s military command now has a full menu of choices. China could undertake a blockade scenario, a missile coercion scenario, a decapitation scenario, a limited island seizure (e.g. Penghus) or even a full-scale invasion scenario. Indeed, such a foolhardy and aggressive lurch in U.S. diplomacy as recommended by Chang, just might incentivize Beijing to strike early, knowing full well that U.S. forces are hardly well positioned for the near-term onset of such a bloody contest. Here, sadly, a Chinese fait accompli, could be triggered by impulsive U.S. steps. It’s safe to assume that more than a few Chinese hawks would be very pleased to be served up the fine cassus belli in Chang’s proposal.

Chang’s pathetic military analysis is limited to a superficial understanding that China now “has some guns,” so it is far from clear that he understands the consequences of the doomsday situation his policy recommendation could set in motion. As a student of nuclear strategy for the last two decades, I can say with confidence that there is absolutely no certainty that a U.S.-China war over Taiwan would remain nonnuclear. Indeed, the troubling reality is that Chinese military writings have shown a pronounced interest in tactical nuclear weaponry of late.

On the flip side, Chang makes an even greater error of judgment in assuming that the current status quo (with a tweak here and there) cannot be sustained. For the record, I did not call on the United States to renounce the status quo, but rather to cease recent attempts to alter that status quo, with highly symbolic and also inflammatory actions, including official U.S.-Taiwan visits (phone calls), facility upgrades, and/or port calls to Taiwan by U.S. Navy ships. In Chang’s approach, there is seemingly no room for negotiation. That is particularly sad in this case, because negotiations have seemed quite recently to be on a very promising course, such that the leaders of Taiwan and Mainland China actually met amicably for a face-to-face summit for the first time ever in November 2015 in Singapore. Myriad issues could be part of a hypothetical “final status” negotiation that I have proposed in some detail in my 2015 book, to include military deployments, military confidence building, phased mutual disarmament, diplomatic representation, scientific and commercial joint ventures, as well as obviously rights and autonomy within a confederation arrangement. Few Americans are apparently aware that Beijing agreed as far back as 1983 (with Deng Xiaoping’s explicit endorsement) that Taiwan could retain its armed forces in a final status agreement. Yet for Chang, such negotiations are anathema—a sign of weakness that invites “calamity,” as he puts it. It’s too bad that such hawks are afraid to negotiate, and want to put all their faith into illusory military (deterrence) solutions.