Is Belarus Destined to Become the Next Crimea? 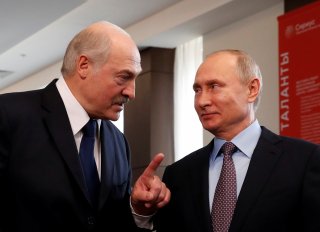 If you’re President Trump, and you’re looking for a prudent policy that safeguards the transatlantic community and keeps Russia at bay, the situation with Belarusian President Alexander Lukashenko presents quite a challenge.

For Lukashenko, often called “Europe’s last dictator,” 26 years in power wasn’t enough. And so, earlier this month, he declared victory in an election roundly denounced rigged.

The upshot has been international condemnation and unprecedented anti-Lukashenko demonstrations, with tens of thousands marching in the streets. Lukashenko has since promised new elections — after a new constitution is drafted. He also floated a transparently meaningless power-sharing agreement with the opposition. Neither will satisfy the protesters, who are clearly fed up with Lukashenko’s brutal and corrupt regime.

Initially, Lukashenko tried to deflect criticism by complaining about Russian electoral interference. But as the protests continued to grow, he reversed tactics and appealed to Moscow to help bring stability “if needed.” State TV later “clarified” he would not seek Russian military help unless Belarus was attacked “from the outside." Yet Lukashenko has already claimed that outside forces have been discovered operating in Belarus to sow instability.

Never missing an opportunity to capitalize on crisis, Putin could well use any excuse as chance to intervene. Russian propaganda has already been spewing several conspiracy theories accusing NATO or individual European countries of meddling, thus manufacturing potential excuses for Russian intervention.

The probability of Russian intervention in Belarus is actually quite high. Putin has no desire to see the country break away from Moscow’s sphere of influence. Yet the pro-democracy protests are growing daily. Even workers at state-owned factories, a core constituency of Lukashenko’s regime, are beginning to strike. Social media videos show law enforcement and military personnel taking off their uniforms and casting them aside before embracing protesters. At least one embassy (in Stockholm) is now flying the original (pre-Lukashenko) Belarusian flag. Even if the demonstrators fail to unseat the government, Putin might make a move to ensure the regime never forgets who Putin thinks is in charge here.

Here’s one likely scenario. The protests continue to grow and spread. Sanctions, such as those imposed this week by the European Union, begin to bite, weakening the resolve of the sanctioned officials and their cronies. More sanctions are layered on by more countries.  At that point, the time is ripe for Russian intervention to “restore stability.”

This could take the form of a unilateral Russian act or a joint action taken by the Russia-led Collective Security Treaty Organization (CSTO). Operations could involve regular military units, “little green men” (masked soldiers from Russia’s Federal Security Service) or both.

Military intervention might then lead to the long-discussed political “union” between Belarus and Russia, with Lukashenko remaining on stage in some sort of Father of the Nation role.

Basically, this scenario depicts yet another an illegal land grab by Putin, similar to what he’s done in Georgia and Crimea, and what he’s still trying to pull off in Ukraine. At its conclusion, it would leave Russian forces in positions that threaten three NATO members—Latvia, Lithuania and Poland—and leave them within striking distance of Kyiv.

Putin may be emboldened by the perception of a West greatly divided and distracted. He sees the U.S. distracted with domestic politics and COVID. Last week he saw Greece block a stronger EU statement on the Belarusian situation.

Moreover, Putin is desperate to get a win somewhere. He hasn’t had one in a long time. His Syrian and Libyan adventures are going nowhere. Meanwhile, the Russian economy is tanking. An easy win in Belarus could be just the pick-me-up Putin and his supporters need.

So, where does all this leave the U.S.? We certainly don’t need another war. On the other hand, the West can’t sit on its hands. And America, as always, should take the lead.

President Trump can shine here, but making it crystal clear that the problems of Belarus should be resolved by the Belarusians, not by Russia or any other outsiders. The people of the country must be left free to figure out their own future.

Trump should also make clear that: Russian interference will cost Putin; we and our allies will never accept a coerced Belarusian “Union” with Russia; nor will we recognize any puppet Belarusian government propped up by foreign military forces.

While the West needs to show resolve and discourage meddling by Putin, the people of Belarus are likely to continue an active resistance. They, too, will make Putin pay a price if he elects to intervene. He could well find himself in yet another interminable quagmire of his own making.

The current crisis in Belarus is yet another reminder that freedom never comes free. To gain it, and to preserve it, it is necessary to stand up to bullies and tyrants. America can and should lead countries already enjoying freedom to help those who so desperately seek it in the streets of Belarus.

Kiron Skinner is the Taube Professor at the Carnegie Mellon University, where she directs the Institute for Politics and Strategy.