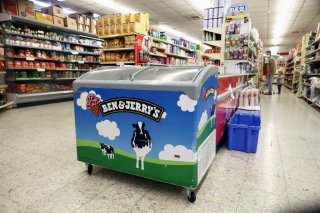 Investment in Ben & Jerry’s—the progressive bastion of ice cream—is beginning to melt away as red, blue, and purple states are scooping pension dollars out of the firm.

As Israel policy goes, this hardly meets the gravity of the Iron Dome vote in Congress this past week. But the ice cream chain is already on the path to lose hundreds of millions in stock buys and that could grow among states telling companies if you boycott Israel, we boycott you.

Getting political over an ice cream shop might seem a bit too cute. But in July, the Vermont-based Ben & Jerry’s announced it would stop selling its product and doing business in what it called “Occupied Palestinian Territory,” declaring “We believe it is inconsistent with our values for our product to be present within an internationally recognized illegal occupation.”

On September 21, Arizona’s state treasurer formally withdrew all of its state employee pension money from Unilever, the parent company of Ben & Jerry’s—a loss of $143 million.

A few days earlier, the New Jersey investment division informed the company it would be yanking its $182 million in pension investments.

The states pulling investments are among those with laws or formal policies preventing pensions from buying stock in a firm that boycotts or divests from Israel, a way to counter the Boycott, Divest and Sanction movement, also known as BDS.

In the case of Florida, state law wouldn’t require selling its existing $139 million in Unilever stock, but as of October 26, the state will stop new investments.

But the Empire State hasn’t acted on those concerns the way Arizona, Florida, and New Jersey have.

The National Legal and Policy Center (NLPC), a government and corporate watchdog group, is trying to turn up the pressure on DiNapoli.

“We are doing this because somebody has to hold the independent board of Ben & Jerry’s accountable for their anti-Semitic use of their platform and company resources,” Tom Anderson, the director of government integrity for the NLPC, said in a statement.

The NLPC has also filed a complaint with the Internal Revenue Service about the Ben and Jerry’s Foundation’s use of funds.

The organization recently penned a letter to the New York comptroller to ask for immediate divestiture.

“We were encouraged that your office in July warned Unilever that it’s Ben & Jerry’s subsidiary, by its decision to stop selling ice cream in Israel’s ‘occupied territories,’ jeopardized the Common Fund’s ability and willingness to invest in Unilever,” the letter says.

The letter goes on to contend that the bigger issue could be Anuradha Mittal, the chairwoman of the Ben & Jerry’s Board of Directors. Mittal is the architect of the ice cream company’s policy of ending sales in parts of Israel. Her Twitter account has endorsed the Boycott, Divestment, Sanctions movement aimed at Israel, the NLPC notes.

Mittal runs the Oakland Institute, a California-based nonprofit that the NLPC notes gave a subgrant to the Badil Resource Center for Palestinian Residency and Refugee Rights in 2017. In 2020, the European Union stopped funding the Badil center after it refused to agree to an “anti-terror” clause in its funding contract.

“If Unilever were truly opposed to anti-Semitism, it would have already severed its relationship with Mittal,” the NLPC letter to the New York comptroller states.

Importantly, Ben and Jerry—or founders Ben Cohen and Jerry Greenfield—are both Jewish and said they were pro-Israel in a New York Times op-ed.

That’s a fair point. The policies of any government are fair game for questioning. But to single out Israel as “inconsistent with our values” is puzzling.

As the NLPC reminded the comptroller, “Unilever’s anti-Israel bias is underscored by the fact that it has announced no intention to end ice cream sales in China, where it is a leading foreign brand.”

Fred Lucas is chief national affairs correspondent for the Daily Signal and the author of Abuse of Power: Inside The Three-Year Campaign to Impeach Donald Trump.