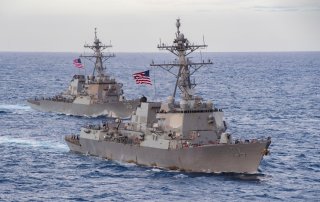 On March 29, the Department of Defense (DoD) submitted its much-anticipated National Defense Strategy (NDS) to Congress, with Under-Secretary of Defense for Policy Colin Kahl tweeting that an unclassified version will be publicly released in “coming months.” The NDS is DoD’s “capstone strategic guidance” and lays out how it will implement the Biden administration’s broader national security strategy initially sketched in the Interim National Security Strategy of March 2021.

This iteration of the NDS is significant for at least three reasons: it comes amidst major war in Europe and heightened concern by the United States (and allies) of growing alignment between Russia and China; there remain enduring concerns that the defense budget is driven by individual service prerogatives rather than coherent strategy; and DoD’s other strategic review documents, the Nuclear Posture Review (NPR) and Missile Defense Review (MDR), will for the first time be integrated into the 2022 NDS.

Based on information publicly available so far, the NDS looks to be privileging rhetoric over both process and strategy. It has taken shape without a National Security Strategy (NSS) to lend it coherence, and skews more toward dissuasion that the current buzzword of “deterrence.”

Process in and of itself does not necessarily make good strategy as “sequencing is inescapably star-crossed” through the intervention of budget cycles and events. Yet “there is a hierarchy of sorts” amongst the “strategy stew” within the U.S. national security enterprise that, if followed, should assist in ensuring a level of coherence.

What is surprising is that this “hierarchy of sorts” appears to have not been followed so far. As for strategy—the essence of which is the integration of ends, ways, and means “into a coherent, cohesive whole”—the Biden administration seems to have little trouble in enunciating desired ends, but more difficultly in identifying the necessary courses of action and the instruments of national power to reach them.

As prefigured in the March 2021 Interim National Security Strategy, two issues loom large in the NDS: the threats posed by China and Russia, and the challenges of deterring their “aggression.”

On the first issue, the two-page “fact sheet” released by DoD as it sent the classified document to Congress reveals that, despite Russian armed aggression in Europe, the Biden administration, to the relief of some U.S. allies in Asia, will continue to place primary emphasis on countering Chinese ambitions. The fact sheet identifies four priorities for the Pentagon with “defending the homeland, paced to the growing multi-domain threat posed by the [People’s Republic of China] PRC” topping the list. This is rounded out by “deterring strategic attacks against the United States, Allies, and partners”; “deterring aggression, while being prepared to prevail in conflict when necessary, prioritizing the PRC challenge in the Indo-Pacific, then the Russia challenge in Europe”; and “building a resilient Joint Force and defense ecosystem.”

Countering the perceived challenge from China is no surprise given the country’s centrality to the March 2021 Interim National Security Guidance, and the largely bipartisan consensus that has emerged in Washington over recent years that the United States and China are locked into “strategic competition” for the foreseeable future. As many have argued, however, “strategic competition” offers neither a clear guide to identifying the precise nature of China’s challenge to the United States, nor a blueprint for how best to respond. Rather, it has served as a catch-all term under which to place all manner of real and perceived Chinese threats to U.S. security—from unfair trade practices to information and influence operations.

A major danger here is that, as Anthony Cordesman wrote, such “broad strategic rhetoric” generally fails to translate into “tangible plans, programs, and budgets” and provides “little more than generic rhetoric about overall strategy with no supporting explanation or justification of how strategy is to be implemented by region or key area of focus.”

This appears to be compounded by the fact that the administration has submitted its FY2023 defense budget request of $813 billion without due regard for the hierarchy of the “strategy stew.” Here, the National Security Strategy (NSS) stands at the apex. While usually “framed in broad, aspirational language,”  it is nonetheless “meant to serve as the foundation for the strategic documents and policies of the various departments—and, in turn, their respective strategies are meant to align and ‘nest’ within the overall NSS.” But as Kori Schake notes, none of this has been completed “except for interim guidance for preparation of the national-security strategy.”

So much for process. What about strategy?

In terms of the identification of desired ends, the Interim National Security Guidance pinpointed three objectives: “defend and nurture the underlying sources of American strength, including our people, our economy, our national defense, and our democracy at home”; “promote a favorable distribution of power to deter and prevent adversaries from directly threatening the United States and our allies, inhibiting access to the global commons, or dominating key regions”; and “lead and sustain a stable and open international system, underwritten by strong democratic alliances, partnerships, multilateral institutions, and rules.”

While one may debate the expansive nature of such objectives, at least they are clearly stated. Unfortunately, the same cannot be said, however, for how the administration intends to achieve them. The NDS fact sheet identifies a three-pronged approach of “integrated deterrence,” “campaigning,” and “building enduring advantages” to counter what it terms the United States’ “most consequential strategic competitor” (i.e., China).

“Integrated deterrence” had been foreshadowed by a number of statements by DoD officials (including Secretary of Defense Lloyd Austin) since the Biden administration took office. The NDS now defines this concept as

...developing and combining our strengths to maximum effect, by working seamlessly across warfighting domains, theaters, the spectrum of conflict, other instruments of U.S. national power, and our unmatched network of Alliances and partnerships. Integrated deterrence is enabled by combat-credible forces, backstopped by a safe, secure, and effective nuclear deterrent.

This, according to Deputy Secretary of Defense Kathleen Hicks will enable the United States to make the “costs and folly of aggression” by adversaries such as China and Russia “very clear.”

However, it is not at all apparent from previous statements by DoD officials or the NDS fact sheet how integrated deterrence will function, what capabilities are deemed to be required and what might be the role of allies/partners in this enterprise.

Oddly, some Pentagon officials in fact believe that the U.S.-led response to the Russian invasion of Ukraine shows that the “model of integrated deterrence comes out smelling pretty good.” The rational here, according to an anonymous official quoted by the Washington Post, is that the U.S. response has leveraged its “primacy in the global financial system” and its alliance networks “in ways that can absolutely pummel aggressors.”

This completely ignores the basic fact that Vladimir Putin invaded Ukraine despite U.S.-led efforts to deter him from doing so. What the official is referring to instead is the administration’s effective marshaling of U.S. and allied diplomatic and economic response to that fact. Significantly, the administration, both in its pre-invasion attempts to deter Putin and post-invasion efforts to assist Ukraine, has studiously avoided consideration of the direct application of U.S. military capabilities. There are, of course, good reasons for this—i.e., concerns about risking escalation to a direct Russia-NATO confrontation—but it begs the question as to what role the administration sees for American military capabilities playing in “integrated deterrence”?

The notion of “campaigning,” in turn, according to the NDS fact sheet, will

…strengthen deterrence and enable us to gain advantages against the full range of competitors’ coercive actions. The United States will operate forces, synchronize broader Department efforts, and align Department activities with other instruments of national power, to undermine acute forms of competitor coercion, complicate competitors’ military preparations, and develop our own warfighting capabilities together with Allies and partners.

In plainer language, as Bryan Clark and Dan Patt note, this is drawn from Marine Corps doctrine, and refers to the “orchestration of military activities alongside economic, diplomatic, and information actions to achieve specific goals.”

Finally, “building enduring advantages,” is arguably the most straightforward, entailing “undertaking reforms to accelerate force development, getting the technology we need more quickly, and making investments in the extraordinary people of the Department, who remain our most valuable resource.” At least this amounts to a sensible focus on the material and human elements of capability acquisition and development necessary to counter perceived challenges/threats.

That said, when taken together, the NDS appears not to be directly concerned with deterring but dissuading adversaries.

The distinction between the two concepts is important. Deterrence, as Michael Mazarr states, “is the practice of discouraging or restraining someone” from “taking unwanted actions, such as an armed attack” and as such it is designed “to stop or prevent an action” from taking place. Dissuasion, in contrast, is a broader concept that seeks to shape a (potential) adversary’s long-term behavior, “discouraging that country from embracing policies and building forces that could produce political confrontation, military competition, and war.”

Dissuasion, therefore, acts “not by threatening direct military retaliation as an ever-present reality, but by making clear that it will thwart and frustrate hostile steps through countervailing measures of its own.” Key to successful dissuasion is an element of reassurance: the dissuader must be able to provide the adversary with assurance that if it avoids “embracing policies and building forces” that could produce conflict, the dissuader will not proceed with countervailing measures. Dissuasion can thus “be viewed as a kind of "pre-deterrence.”