Biden’s State Department Drops the Ball on the South Caucasus 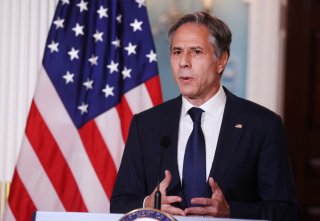 The world focuses today on the chaos in Afghanistan. Some of this concern may be misplaced: The threats caused by the Taliban pale in comparison to those posed by China and Russia. Despite President Joe Biden’s rhetoric, his administration appears no more willing to counter Russian president Vladimir Putin’s actions than President Donald Trump’s was before him.

Consider Armenia: it has now been almost a year since Azerbaijani president Ilham Aliyev’s forces, backed by Turkish Special Forces and Islamic fighters from Syria, launched a surprise attack on Nagorno-Karabakh. They managed to annex a large chunk of Nagorno-Karabakh, not only due to their own military prowess but also because of the hapless leadership of Armenia’s Prime Minister Nikol Pashinyan. Sadly, 105 years after the start of the twentieth century’s first genocide, ethnic Armenians again had to abandon their towns and villages under the genocidal threat by the same regional actors.

The ensuing ceasefire was more a victory for Russia, however, than it was for Azerbaijan. Putin fulfilled his long ambition to insert Russian troops in the South Caucasus from where they can further deter or subvert democracy or pro-Western movements. Aliyev sacrificed sovereignty; he cannot make a move without the approval of his Russian benefactors and business partners.

Today, the Russian leader seeks to force Armenia to open a corridor across its sovereign and undisputed territory between the Azerbaijani enclave of Nakhchivan and Azerbaijan proper. He also seeks to impose upon Armenia a demarcation and delineation agreement with Azerbaijan based on the administrative borders imposed by Joseph Stalin between the Armenian Soviet Socialist Republic (SSR) and Azerbaijani SSR.

American diplomats rotate postings every two to three years and so institutional memory is shallow. Many within the U.S. State Department accept the legality of the borders that former Soviet states inherited upon the fall of the Soviet Union and shrug off the Azerbaijani conquest of Nagorno-Karabakh because they mistakenly believe it was Azerbaijani territory.

The Commission for the Delimitation of the Boundaries of Armenia, which met in London as an official sidebar conference to the Paris Peace Conference, assigned Nagorno-Karabakh as well as a large part of “Lower” Karabakh to be part of the Republic of Armenia based on demography prior to Armenia’s partition between Soviet Russia and Kemalist Turkey. President Woodrow Wilson subsequently included the commission’s findings in Document No. 2 in Annex I of his Nov. 22, 1920, Arbitral Award. This indicated official acceptance of the legality of Armenia’s claims over its historic territory in Nagorno-Karabakh.

The State Department should call out the Kremlin’s inconsistency: Putin justified Crimea’s annexation in both Russia’s historical control and the local population’s right to self-determination, not on the basis of Soviet administrative borders. At the downfall of the Soviet Union, the population of Nagorno-Karabakh voted to reverse Stalin’s actions and to succeed from Azerbaijan and join Armenia. To allow Putin’s demarcation to go forward effectively forces Armenia to relinquish its claims to Nagorno-Karabakh because of Stalin’s gerrymandering of borders.

Putin’s policy is multi-pronged, however. The Russians encourage new tensions on Armenia’s border to force greater Armenian reliance on Russia. Putin has effectively co-opted Pashinyan—who became the toast of the West when he led a 2018 people’s revolution—to accept Russian forces while he ignores continued French offers of military assistance. It is in this context that the State Department should understand the June 20 snap elections in Armenia. Rather than acting as a referendum between the past pro-Russian regime and Pashinyan, it was in effect a contest between an old coalition of Russian proxies and a new one, which is equally willing to do Putin’s bidding.

Biden may talk about recalibrating U.S. policy to face future threats but, in the South Caucasus, his State Department is not only dropping the ball but actually playing into Putin’s hands. It is not too late, though, for Biden and Secretary Antony Blinken to promote America’s strategic interests in that vital region.

Ara Papian is Armenia’s former Ambassador to Canada and a governing board member of the National-Democratic Axis (NDA), a pro-Western political movement in Armenia that advocates for a Major Non-NATO US Ally status for Armenia.