Biden and Xi’s Scripted Summit Was More Talk than Action 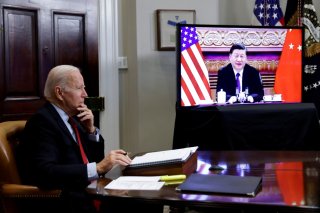 Many weeks of preparation and planning went into the virtual summit meeting between Joe Biden and Xi Jinping. But you wouldn’t have known that judging by the outcomes.

It’s vital to get the China-U.S. relationship right. Failure to do so could end in a costly war. Viewed from that perspective, the summit really didn’t help. It may well have hurt.

Signs of “trouble ahead” came early. The preparations for the summit started with Chinese officials berating Secretary of State Antony Blinken at a meeting in Anchorage this March. Beijing followed up by offering U.S. State Department deputy secretary Wendy Sherman a meeting with a more junior Chinese official—a diplomatic snub. Subsequent interactions, including the president’s Sept. 9 call with Xi, apparently had little impact.

These “engagements” certainly did not ease tensions in the Taiwan Strait. During Chinese and Taiwanese national days in October, Beijing ordered the largest ever incursions by People’s Liberation Army Air Force aircraft into Taiwan’s air defense identification zone. Nor did greater collaboration on climate change develop. By mid-October, Xi had made it clear he was blowing off the COP26 climate summit. His presence and potential agreement at that conference had been a high hope for Biden and his climate czar, John Kerry.

Even though the bilateral summit was mostly scripted, the post-event messaging has been a mess. For months Biden has walked back earlier characterizations of Xi as an “old friend,” despite a record of building such a relationship. Given the political climate of late and tensions in Asia, such a relationship seems out of place, and Biden has snapped at those suggesting his relationship with Xi is a friendship. Unfortunately, the first words out of Xi’s mouth at the virtual summit was to greet Biden as an “old friend.”

In China, the interaction and visuals coming out of the summit were sold as big wins for Xi. The Chinese strongman is currently engaged in an effort to consolidate his power further, going into the next National Party Congress in October 2022.

Moreover, neither American nor Chinese readouts indicate that there was any discussion of Covid-19’s origin. Preventing a repeat, as well as fighting the current coronavirus pandemic, requires a better understanding its origins, and, after months of trying, the United States has learned nothing. The potential that a lab leak caused the pandemic has gone from far-out conspiracy theory to a sufficiently realistic possibility that even the UN World Health Organization has admitted was premature to rule it out earlier. After 770,000 American deaths, not pressing Beijing for transparency on this issue is irresponsible and leaves the world more at risk of another pandemic.

Perhaps most concerning, Biden seems to have latched onto a bad idea regarding how to reduce the risk of conflict with China. If we have learned one thing with China, it is that Beijing responds best to action, not talk. When Biden spoke of pursuing “common-sense guardrails to ensure that competition does not veer into conflict” it signaled that his administration intends to give China a pass on its behavior in the South China Sea, cyber theft, and its nefarious influence campaigns through the Chinese Communist Party’s United Front Department.

Lastly, in the days following the virtual summit, the president found himself trying to clarify his own comments, which only made matters worse. First were his remarks at a press gaggle in New Hampshire where he seemed to support Taiwan independence and argued that the Taiwan Relations Act supports that. In fact, the act does not support any position on Taiwan’s political standing.

If Biden actually meant to signal a change in policy, that’s something that needs to be carefully thought through. It certainly should not be tossed off in a press conference. Saying Taiwan and independence in the same sentence is a red line in Beijing and is sure to get a reaction. While Chinese red lines are not our red lines, we need to be thoughtful before we cross them. The president and his staff have since had to walk back his past remarks, this one just another in a long list of slips Biden has made on the Taiwan issue.

Later, before boarding Air Force One, the president seemed to clear up his comments on Taiwan, only to trade his “independence” gaffe for another: this one regarding freedom of navigation. He implied that the United States would no longer enter China’s territorial waters—something that is clearly allowable as innocent passage.

This is an issue that has been a priority since his days as vice president. His recent confusing comments on what constitutes international airspace and not entering China’s territorial waters are bewildering. The president needs to clarify the U.S. position on what are and are not Chinese territorial waters. For a start, he should reiterate that the twelve miles from Chinese man-made island-garrisons in the South China Sea are not territorial waters.

Given the consequences of miscommunication at a time when tensions are high already in Asia, it might have been better not to press for the virtual summit. Beijing appreciates power not words, and so much diplomatic follow-up and clarification could have been avoided if the focus had been on actions instead.

Brent D. Sadler is a senior fellow in The Heritage Foundation’s Center for National Defense.