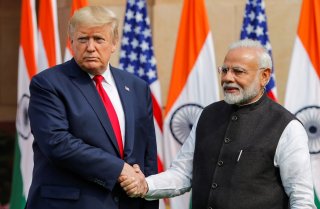 This attention to India may seem curious for an administration supposedly motivated by a myopic transactionalism. India is not a U.S. treaty ally. It has struggled economically and, despite significant improvements in recent years, continues to face serious developmental challenges and resource constraints. And it often disagrees with the United States on important strategic questions. Why, then, did U.S.-India cooperation become so important to the Trump administration? What steps did the Trump administration take to advance it? And how can the United States, under the Biden administration, most effectively build on the progress of the last four years?

China’s growing power enables it to engage in a range of economically and militarily coercive policies in the Indo-Pacific, threatening the region’s independence and security. The United States lacks the resources to resist this behavior alone, or even together with its regional treaty allies, however. It therefore must forge new partnerships, with states that wish to offset Chinese power, but are not part of traditional, U.S.-led alliance structures. India’s size, preferences, and location uniquely suit it for this role.

Although core elements of this approach emerged during the George W. Bush and Obama administrations, the Trump administration built on them, developing their logic more fully. The administration recognized the importance of what it called great-power competition, and deliberately reoriented U.S. strategy toward it; explicitly identified China as the United States’ primary great-power challenge; drew the connection between the Chinese challenge and the need for new cooperative relationships in the Indo-Pacific; and understood India’s unique advantages as a partner. It then set out to enhance Indian strategic capacity through far-reaching policy efforts in a range of areas including military interoperability, technology sharing, bilateral and multilateral diplomacy, and defense trade.

The strategic environment in the Indo-Pacific has not improved since the 2020 presidential election, and is unlikely to do so in the near future. Close U.S.-India cooperation, therefore, remains essential. The Biden administration, despite its wholesale criticism of the Trump administration’s foreign policy, will need to build on the previous administration’s success. To this end, I offer five principles that can help the United States expand on the Trump administration’s achievements and guide future U.S. policy toward India. By maximizing trust between the United States and India; tempering military expectations of India to meet the actual demands of Indo-Pacific strategy; accepting an “open” diplomatic relationship with India; ensuring that U.S.-India cooperation supersedes competing interests within the foreign policy bureaucracy; and avoiding false equivalence between India and Pakistan, the United States can continue to advance U.S.-India relations and achieve one of its most urgent strategic tasks.

THE UNITED States’ most serious strategic concern is rising Chinese power in the Indo-Pacific region. The reason is straightforward: it is an area of tremendous economic and demographic importance, with about 60 percent of the world’s population and home to the world’s largest youth populace, with approximately 700 million inhabitants between fifteen and twenty-four years of age. In the next ten years, the region will likely contain four of the world’s five largest economies in terms of purchasing power parity—China, India, Japan, and Indonesia. By 2030, the Indo-Pacific will generate more than half of the world’s economic output, consume over half of the world’s food, and use 40 percent of its energy. The region’s sea lines of communication (SLOCs) comprise the world’s busiest trade routes, carrying one-third of all bulk cargo and two-thirds of all oil shipments. These shipments include 80 percent of China’s and 90 percent of Japan’s and South Korea’s oil. This traffic must cross the Strait of Malacca, Asia’s most important chokepoint and the primary passage between the Indian and Pacific Oceans.

To ensure the security and prosperity of this strategically vital region, the United States and the international community sought to engage a rapidly rising China in the decades following the Cold War. They hoped that as China became more deeply enmeshed in international institutions and enjoyed the benefits of economic cooperation that its preferences and behavior would become less competitive and more liberal. These efforts were unsuccessful. Indeed, the more deeply the United States and the global community engaged China, the less cooperative, and more illiberal, it became.

Today, China threatens the Indo-Pacific region through a variety of means, including predatory development schemes, coercive dispute resolution, territorial reclamations, rejection of international law, and the subversion of international institutions to promote its interests. A rapidly growing economy and an increasingly sophisticated military with burgeoning area-denial capabilities have facilitated this behavior. If unchecked, China will increasingly be able to impede access to the Indo-Pacific and exert economic leverage over the region, isolating the United States and other states from critical lines of communication, markets, and supply chains; damaging their prosperity; and threatening their security. Preventing Chinese regional hegemony and ensuring that the Indo-Pacific remains “free and open” has thus become the United States’ primary strategic goal.

The United States’ ability to resist China and maintain a free and open Indo-Pacific will depend on its ability to cooperate with other regional countries. Although the United States remains the world’s most powerful state, it lacks the resources to keep the Indo-Pacific free and open alone. The United States’ need for cooperation, of course, is not new; America has long relied on NATO in Europe and on treaty allies like Japan, South Korea, and Australia in Asia to help meet its strategic challenges.

NATO will be of limited utility in offsetting Chinese power in the Indo-Pacific. The region is far out of area for the alliance. Members are divided over the degree of threat that China poses, as well as the combination of competition and conciliation that constitutes the best response to it. NATO leadership, while recognizing the Indo-Pacific’s increasing importance, will not commit to participation in military operations there. Some NATO states, in their national capacities, are willing to deploy naval forces to the region. But distance from the Indo-Pacific will limit the scope of their presence, keeping it mostly at the symbolic level.

U.S. allies in Asia are more directly threatened by China’s rise and are in closer agreement with each other regarding the danger that Beijing poses. Given their location in the region, they also are better able to maintain a military presence there. But their primary focus is East and Southeast Asia, and operational and political constraints limit their ability to project power westward into the Indian Ocean and beyond. Consequently, the United States will have to transcend its legacy alliances in both Europe and Asia, forging new partnerships with states that possess the requisite heft, interests, and geography to help it offset rising Chinese power throughout the Indo-Pacific.

India has these qualities. It is a continent-sized power, stretching from the Himalayas to the Indian Ocean, and from the Arabian Sea to the Bay of Bengal. It shares a 2,100-mile land border with China. Its population is the world’s second-largest. It has roughly the fifth-biggest economy in the world, which has expanded rapidly, if sometimes unevenly, since economic liberalization in the early 1990s. It is a longstanding democracy and, with a brief exception during the 1970s, has held regular, contested elections since achieving independence. It sits astride crucial sea lines of communication connecting Europe, the Middle East, East Africa, and East Asia. And it is deeply worried about rising Chinese power, having fought a bitter 1962 war with China over a still-unresolved, and periodically violent, border dispute. In the broader Indo-Pacific, it shares the U.S. dedication to preventing Chinese hegemony and ensuring a free and open regional order.

To be sure, India’s strengths as a partner are tempered by a number of challenges: India’s economy is smaller, and has grown more slowly, than China’s; its armed forces are less numerous and sophisticated than the Chinese military; and although indicators such as poverty rates have improved sharply in recent years, it still faces enormous domestic developmental challenges. These problems will be worsened by the coronavirus pandemic, which has imposed huge costs on the Indian economy.  India and the United States also have diverged on a number of policy issues, like nuclear proliferation, the rules governing U.S.-India trade, and relationships with problematic third-party states such as Russia, Iran, and Pakistan.

Although these challenges are significant, they do not diminish the importance of the U.S.-India relationship. Rather, they make clear to India the impossibility of resisting China alone and the need to work closely with a stronger partner such as the United States. They underline for the United States the importance of helping to build India’s strategic capacity so that it can more effectively compete with China in the future and share the burden of keeping the Indo-Pacific region open and free. And they highlight for both countries the need to focus their cooperative efforts on core areas of strategic agreement, without allowing less important policy differences to distract them and undermine their partnership.