Biden Must Manage the Israeli-Palestinian Conflict 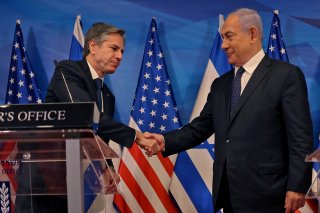 The Middle East has a way of imposing itself on American presidents and their administrations. Just ask President Joe Biden. With six phone calls to Prime Minister Benjamin Netanyahu and calls with Mahmoud Abbas, the President of the Palestinian Authority, and President Abdel Fattah al-Sisi of Egypt, he understood, whatever his hopes, that his personal involvement was necessary to help produce the ceasefire. And, while a trip to the Middle East had not been on his agenda at this time, Secretary of State Antony Blinken felt the need to go to the region to try to bolster the ceasefire, address humanitarian and reconstruction needs in Gaza, and establish a diplomatic track for managing Israeli-Palestinian relations and recommitting to a two-state for two peoples’ outcome.

As someone who negotiated with the parties for decades, I know that each of these tasks contains its own challenges. Ironically, the least difficult one is bolstering the ceasefire. True, it was a ceasefire in which nothing was agreed except to stop the firing of weapons, but the fact is that both sides had reason to stop. Hamas was paying a severe price in terms of its military infrastructure and had already achieved what it set out to do: impose a price on Israel in response to events in Jerusalem and make Hamas more the focal point of the Palestinian cause than the Palestinian Authority in the West Bank. For its part, Israel, too, had succeeded militarily in what it was largely going to achieve with air attacks: it had destroyed Hamas rocket producing facilities and a critical part of its network of tunnels that protect Hamas weapons, fighters, intelligence means, and even some of its commanders. Additional strikes would, at best, yield diminishing returns at a time when international public opinion was already turning powerfully against Israel. Still, even when ending the fire may be in both sides’ interests, ceasefires don’t necessarily happen without a mediator and outside intervention—and Egypt and the Biden administration played that role creating cover, pressure, and an explanation for both.

What about addressing humanitarian needs and reconstruction? Before coming under fire for expressing the truth, the director of UNRWA in Gaza, Matthias Schmale, acknowledged that Israeli strikes, though brutal, were precise and that with the Kerem Shalom crossing point open, there was no shortage of food, fuel, or medicines in Gaza. There was, however, a profound need for reconstruction, with an additional 77,000 Gazans homeless and infrastructure generally, and water and sewage in particular, in desperate need of repair and rebuilding. And, here there is a real challenge: how to reconstruct Gaza and not have Hamas divert the materials for its rearmament. Secretary of State Blinken acknowledged this problem, emphasizing when he was in Jerusalem that “we will work with our partners…to ensure that Hamas doesn’t benefit from reconstruction assistance.”

That won’t be easy. A similar attempt was made following the conflict in 2014, using the Gaza Reconstruction Mechanism and it failed. True, pledges for reconstruction monies were not fulfilled, but that was at least in part because of the failure to prevent the diversion of materials and Hamas’ military build-up. To understand the scope of the failure and the scale of the Hamas rearmament effort, consider the following:  At the outset of the conflict in 2014, one that lasted fifty-one days, Hamas had roughly 10,000 rockets, fired 4,500, and Israel intercepted about 2,200—meaning Hamas retained around 3,300 rockets at the end. In 2021, Hamas had 30,000 rockets to begin with and fired 4,350 in ten days. Not only was there a ten-fold build-up numerically, but Hamas had longer-range rockets with more payload—and it was able to fire dramatically more per day. But it was not only the build-up of its arsenal. Israel in 2014 sent forces in on the ground and destroyed thirty-two tunnels, including fourteen that penetrated from Gaza into Israel. In 2021, the Israeli military is reporting that it destroyed roughly 60 miles of the Hamas tunnel network, what the IDF referred to as “the metro.” But this was no subway system as it was for protecting Hamas not the Gazan public.

For Gaza, with 50 percent unemployment and 80 percent of the public relying on assistance from the UN before the conflict, think about all the cement, steel, electrical wiring, and wood that was consumed building this underground network—with 60 miles being only part of what Hamas built. (Hamas leader in Gaza, Yahya Sinwar, claims only 5 percent, of the tunnels were destroyed.) Above ground, in Gaza even before this conflict (which destroyed 1100 buildings and damaged over 7,000), there was a desperate need for construction, and investment, and job creation. But that was not Hamas’ concern or priority—its priority was to restore its arsenal and use its fighters to rebuild and extend its tunnel network.

So, absolutely there is a need for an international effort, best mobilized by the United States, to raise the funds, but also to put in place an international mechanism to oversee what comes into Gaza, its movement to warehouses, and then its end usage at construction sites. Unlike before, Egypt can play a crucial effort on the border. With international assistance, Egypt can transform the Rafah crossing, which now handles only people, and make it a central node along with crossings from Israel for thorough screening of all materials coming into Gaza. All trucks conveying the materials would have designated routes and need to be equipped with GPS tracking devices and all the warehouses for the incoming materials would need cameras for 24/7 monitoring. All movements from crossing point to warehouse and from warehouse to construction site must be monitored by a multinational team—some on the ground in Gaza and others, perhaps, including Americans monitoring electronically from outside. If there is any diversion, the process will simply stop, including the movement of any additional construction materials.

Hamas will resist this, but if so, the issue will become one of reconstruction for Gaza versus rearmament for Hamas. When the issue is credibly framed that way, the price for Hamas goes up in Gaza, in the region, and internationally. Moreover, this is not just a framing issue, it is fundamentally practical. Without strict conditionality being imposed, there will be no serious reconstruction: No one is going to massively invest in reconstruction if Hamas can divert materials, rebuild its arsenal, and trigger a war when it suits its aims of taking over the Palestinian national movement. As Hamas has just demonstrated again, if it thinks it can gain politically, it cares little about the price that Palestinians in Gaza will pay. Hamas excels at getting Palestinians killed but not at advancing their cause.

That is a reminder that we should also be trying to bolster the Palestinian Authority (PA) and doing more to help it succeed economically. Any international effort for Gaza should have an assistance element for the West Bank—something Secretary Blinken raised during his trip. However, just as there should be conditionality to ensure no Hamas diversion of material in Gaza, direct assistance to the PA must be tied to real reforms on transparency and rule of law. Absent a reform process, our assistance to the West Bank should be limited only to those projects that would benefit Palestinians (especially road, water, sewage treatment, and health) but would not be managed by the PA.

Finally, diplomacy now should be geared toward producing functional day-to-day cooperation between Israel and the PA. At this stage, direct talks on the permanent status issues will go nowhere—the politics on each side, the real gaps on the substance, and the disbelief of their publics guarantee nothing would be achieved. But there should be an effort to build on the normalization process by producing additional Arab state outreach to Israel in return for Israeli steps toward the Palestinians. The UAE model offered full normalization for no annexation—and of course key security commitments from the United States to the UAE. Why not borrow from that model and quietly explore a menu of options with the Saudis on steps they could possibly take toward Israel; steps they would seek the Israelis to take toward the Palestinian Authority; and commitments they would like from us. (One possibility could be a move of partial normalization like opening a Saudi commercial trade office in Tel Aviv in return for Israel no longer building on the 92 percent of the land to the east of the security barrier or outside the settlement blocs; and, because the Palestinians should be part of any such brokering of parallel steps, the PA ends the preferential and higher monthly welfare payments to the families of those who are in Israeli jails for having committed acts of violence against Israelis.)

Yes, the politics in Israel might make even a freeze on building outside the blocs difficult given settler opposition, especially with a new unity government that has agreed not to try to resolve issues like the Palestinians on which its members disagree. But two points are worth making: first, the conflict with Hamas showed the Palestinian issue cannot be ignored and can affect Israeli internally—meaning the new government will need a policy. Second, notwithstanding opposition from some of the settlers, 80 percent of the Israeli public supported normalization with the UAE rather than annexation of the territories allotted to Israel under the Trump plan. And, during the recent conflict, while the UAE and the others that made peace with Israel condemned its moves in Jerusalem (just like Egypt and Jordan did), none took any other actions in response to the fighting with Hamas—reflecting both their attitudes toward Hamas and the value they place on the agreements with Israel. (Notably, Israel and the UAE finalized a tax treaty, preventing double taxation, on May 31 after the ceasefire.) The normalization process is the one new element in the region that could be used to break the stalemate between Israelis and Palestinians, and the new Israeli government will have an interest in achieving something that goes beyond what Netanyahu was able to do.