Biden Should Support the War and Economic Crimes Court for Liberia 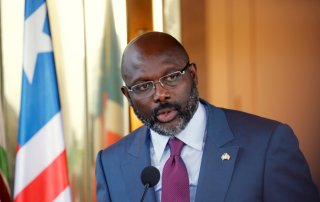 In 1990, just prior to the start of its civil war, the West African nation of Sierra Leone had a population of just over four million people. Over the next eleven years, more than 50,000 civilians died in a civil war that began when the Revolutionary United Front (RUF), backed by Charles Taylor’s National Patriotic Front of Liberia, launched a violent campaign to oust President Joseph Momoh’s government.

What Americans knew about the Sierra Leone conflict centered on discussions of blood diamonds that the rebels used to finance their campaign, but the war was about much more:  The RUF distinguished itself with its brutality—raping, mutilating, and murdering civilians and forcing young girls to marry its soldiers. When the RUF would capture a village, it would often amputate limbs. Some RUF commanders would infamously ask victims if they wanted a long-sleeve or a short-sleeve, cutting off a hand if they answered long-sleeve and the entire forearm if they said short-sleeve.

The war ended in 2002 after the Liberian government stopped facilitating RUF movement and the blood diamond trade, and Guinean forces began bombing RUF bases in Sierra Leone to stop the RUF from linking up with Guinean rebels.

What followed was a relative triumph for both peacekeeping and international justice. The United Nations (UN) Mission in Sierra Leone operated from 1999 until 2005, when it dissolved after being largely successful. Two smaller economic and peacebuilding missions followed, and these, too, succeeded. They did not operate in isolation, however. What greased their success was an UN-sponsored effort to bring justice to those who had perpetrated war crimes in Sierra Leone.

The Sierra Leone government and the United Nations agreed to form the Special Court for Sierra Leone, and the court, whose operations were financially supported by forty different countries, opened on January 16, 2002, in Freetown, Sierra Leone’s capital city. The court was the world’s first “hybrid” international criminal tribunal and the first international tribunal to sit in the country where crimes took place. This was important—it kept justice a largely Sierra Leonean affair rather than one operating from afar with colonial undertones, as too often happens with Hague-based tribunals. The court’s mandate also required that the court execute its sentences in Sierra Leone, except where capacity and security dictated exceptions.

The court had jurisdiction to try those accused of involvement in crimes against humanity during Sierra Leone’s civil war. Over the course of its operation (it dissolved in December 2013 when its mission completed), it indicted nearly two dozen top suspects, including then-Liberian president Charles Ghankay Taylor. While the indictment of a sitting president annoyed the U.S. State Department, which was more comfortable with sweeping Taylor’s complicity under the rug, it was an important signal that neither wealth nor political office could trump justice. Ultimately, the court convicted Taylor and sentenced him to fifty years in prison. For Sierra Leone, the entire process was therapeutic and allowed a new generation to get on with their lives and, increasingly, thrive.

Other African countries, too, have recognized the importance of accountability for crimes. Both South Africa and Morocco, for example, held well-regarded truth and reconciliation processes to bring closure. Morocco’s decision to televise hearings about abuses during the thirty-eight-year reign of Hassan II made the process transparent and augmented public acceptance. Many Rwandans criticized the slow pace of the International Criminal Tribunal for Rwanda that took over a decade and more than $1 billion to ultimately convict only eighty-five participants in Rwanda’s 1994 anti-Tutsi genocide. In response, the Rwandan government also embraced a supplemental grassroots “gacaca” process that reduced prison populations, sped up the judicial process, tried more than one million foot soldiers of the genocide, and helped restore the country’s social fabric. Some within the international human rights community raised objections to the grassroots process, but such complaints appear rooted more in their own lack of involvement rather than the content of the process.

Liberia, however, has yet to bring to justice the perpetrators of its two civil wars that together killed perhaps 250,000 people. The roots of the Liberian conflict date back to Samuel Doe’s violent April 1980 coup d’état. After nearly a decade of Doe’s dictatorship, Taylor’s National Patriotic Front of Liberia invaded the country from the Ivory Coast and began to battle rival warlord Prince Johnson for control of the capital Monrovia. Johnson won that battle and, on video, executed Doe. Fighting for Monrovia and Liberia’s resources, however, continued through the first half of the 1990s. In 1995, there was a tenuous ceasefire and, two years later, Liberians elected Taylor to the presidency in the hope that, with his ambitions whetted, the fighting would stop. It did not. Taylor used blood diamonds to finance rebels in neighboring countries like Sierra Leone and appeared more intent on enriching himself than developing Liberia. Fighting erupted and Taylor ultimately fled prior to his arrest upon the delivery of the Sierra Leonean court indictment. Ellen Johnson Sirleaf, a one-time Taylor-supporter, took over and ultimately won the Nobel Prize for her reconciliation efforts.

In 2009, the Truth and Reconciliation Commission of Liberia recommended that Liberia establish a tribunal largely based on the Sierra Leone model to prosecute war criminals. The Ebola crisis delayed implementation of the tribunal during Sirleaf’s tenure. The problem is that incumbent Liberian president George Weah, who has been in office since 2018, seems to have little interest in holding the perpetrators of war crimes accountable even though the Truth and Reconciliation Commission does not leave the establishment of the War and Economic Crimes Court up to the president’s discretion and requires him to reach out to the international community. While Weah has assured the international community at forums like the United Nations General Assembly that he will work to establish a court, these assurances seem to be for export only; when he returns home, he not only forgets his promises but even denies them, video notwithstanding. His stated desire to reach out to the senate is not credible either since, by law, the senate has no jurisdiction over the establishment of the War and Economic Crimes Court. Part of the problem, frankly, appears to be Weah’s own documented complicity in economic crimes as well as many of his allies’ involvement—including Johnson, who executed Doe and is now a sitting senator, and Jefferson Koijee, whom Weah appointed mayor of Monrovia.

Weah also is in the minority as Liberians seek to move forward and ensure their country sits on a more stable foundation. On October 18, 2021, Alex Cummings, a well-regarded businessman and leading candidate in the opposition coalition that is contesting the 2023 elections, told me, “The WECC [War and Economic Crimes Court] is foundational to restoring rule-of-law in Liberia and ending the era of impunity; it presents the opportunity to bring closure for the hurt and pain of the past and begin a new era of reconciliation and unity, [and] put behind all of our past divisions.”

Both President Joe Biden and Secretary of State Antony Blinken have promised to put diplomacy and human rights first. There is no better place to do so than in Liberia. A word from the Oval Office or the seventh floor of the State Department could have tremendous impact. It could show Weah that the West will not abide his desire to shirk legal commitments and accountability or return Liberia to the past. Frankly, such a move by Biden would have bipartisan support. And the State Department shouldn’t worry—Sierra Leone, South Africa, Morocco, and Rwanda all showed that countries emerge better and more prosperous when they hold war criminals accountable. Justice is cathartic. It is time to do right by Liberia. It is time to abide by the Truth and Reconciliation Commission of Liberia’s recommendations, ignore Weah’s excuses, and demand the establishment of an independent War and Economic Crimes Court based on the model of what worked in Sierra Leone. America should use its diplomatic muscle to seek neutral Western and African donors to underwrite its operation and mandate.