Biden Wants to Stay in Syria—But Withdrawal Is Overdue 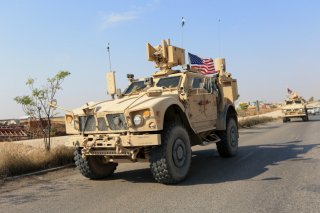 When the United States withdrew from Afghanistan, the moment was hailed—and alternately, decried—as a turning point which would usher in a series of U.S. military withdrawals as Washington reorients its grand strategy. Certainly, President Joe Biden’s rhetoric about ending an era of “relentless war” invited this interpretation. But two months since the last American soldier left Kabul, the administration is now providing assurances there will be no U.S. withdrawal from Syria, where Americans are involved in another “relentless war.”

These promises to stay in Syria represent a strategic blunder and a commitment to an unsustainable mission with no clearly articulated end goal that can be achieved.

The defense of the Kurds seems to be at least one of the major factors behind the administration’s decision to prolong the deployment of the roughly 900 U.S. troops stationed in Syria. In September, Gen. Frank McKenzie, head of U.S. Central Command (CENTCOM, which oversees U.S. military operations in the Middle East), was sent on an unannounced visit to meet with Mazloum Abdi, leader of the Syrian Democratic Forces (SDF). The purpose of McKenzie’s visit was to reassure the Kurdish leader that his forces could rely on continued U.S. support. Shortly after this meeting, Ilham Ahmed, a Kurdish official who serves as the president of the executive committee of the Syrian Democratic Council, met with administration officials in Washington and later commented, “They said they are going to stay in Syria and will not withdraw.”

Instead of utilizing U.S. troops as the protector of Syria’s Kurds, it would be more prudent to end U.S. military involvement in Syria. Against the backdrop of an all-but-settled civil war and threats of a renewed Turkish offensive in response to Kurdish militia attacks, the Kurds are not in the most enviable position. And it’s true that Kurdish fighters fought alongside U.S. troops in ridding ISIS of any physical territory that the terrorist group once used to claim legitimacy. But the United States taking kinetic action in defense of the Kurds against Turkey, a NATO ally that hosts U.S. nuclear weapons, is out of the question. And though we can be grateful for Kurdish assistance against ISIS, it’s worth acknowledging that while interests sometimes align, they also diverge—and there’s no reason to think the Kurds, or any non-Americans, are entitled to the perpetual protection afforded by the U.S. military.

The anti-ISIS mission is actually a great contrast to the current mission in Syria. Denying ISIS territory from which to operate was a limited and achievable mission for which military force was the right tool. Protecting Syria’s Kurds, however, requires a constant supply of resources and manpower and lays out no victory conditions which can be met that would justify a U.S. withdrawal. It’s no surprise that after the ISIS caliphate fell, the U.S. mission in Syria has been aimless, which should raise very good questions about why U.S. soldiers are, to this day, being asked to be on the lookout for drones, rockets, and Russian convoys while officials in Washington pretend the outcome of Syria’s civil war can degrade U.S. security.

Bluntly put, Syria is not a prize for the United States to covet. The scattered remnants of ISIS are no longer the threat they posed at the height of their organization—and they have plenty of enemies present in the region, including Iran, Russia, and the Syrian government. Meanwhile, the civil war has, for some time now, been tilted in Syrian president Bashar al-Assad’s favor and Syria’s neighbors are increasingly admitting this, with efforts at normalization having picked up pace recently.

As for the Kurds, the U.S. announcement of a “withdrawal” from Syria in 2019 prompted the Kurds to quickly make a deal with the Syrian government that would offer them protection. What we can learn from this is that the Kurds understandably care more about survival and having protection than they care about who is offering that protection. It is possible for the United States to encourage Kurdish leaders to make arrangements for protection without expecting U.S. forces to stick around forever. In the event the Kurds once more seek a deal with Damascus, Russia’s backing of the Syrian government provides a strong deterrent preventing Turkey from taking extreme measures against Syria’s Kurds.

A cursory overview of the U.S. relationship with the Kurds reveals a history of U.S. abandonment. It’s unfortunate that the latest U.S. promises to the Kurds could contribute to this pattern. Just as the United States had to eventually admit an indefinite deployment in Afghanistan was unsustainable, it’s going to become more difficult to deny the same can be said about Syria.

The sober reality is that keeping even a token deployment of U.S. troops in Syria endangers American lives, doing more to risk dragging the United States into conflicts prudent leaders should seek to avoid. The best option is to withdraw from Syria, acknowledging that when the mission has diverged from legitimate security interests, it’s time to relent.