Admit It: The United States Has Already Lost in Syria 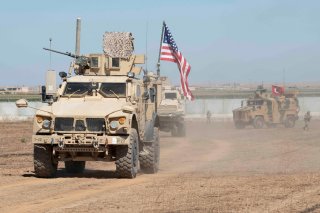 Perhaps nothing better epitomizes the abysmal failure of Washington’s twenty-year-old Afghanistan entanglement and its broader incompetence in Middle Eastern nation-building than the images of Afghans clinging on to U.S. Air Force C-17s before falling to their deaths from hundreds of feet in the air. $2.3 trillion in American taxpayers’ money and the sacrifices of more than 2,400 servicemen were not enough to overcome the enormity of the ethnic, tribal, and religious divergences necessary to build an American-friendly and democratic Afghan nation.

Iraq tells a similar story. After spending $2 trillion and sacrificing more than 4,500 American servicemembers, Iraq was handed over to Iran on a silver platter. In a sense, by removing Saddam Hussein, Iran’s arch-enemy, the United States accomplished what Iran could not in the 1980s, and Tehran has never been so influential in Iraqi politics as they are now. The Iraqi Parliament has voted to kick American troops out, and Iran-backed Shia militias routinely carry out rocket, mortar, and drone attacks on U.S. troops stationed at Iraqi military bases in an apparent attempt to force their exit. Furthermore, the U.S. invasion of Iraq not only paved the way for Iran’s expansion into Iraq, Syria, and Lebanon, but also facilitated Russia and China‘s exploitation of Iraq’s lucrative oil industry. Russia has now become Iraq’s main arms supplier.

The same pattern is being repeated in Syria, where an estimated 900 U.S. troops are believed to be deployed. As in Afghanistan and Iraq, despite spending billions of dollars, Washington has stubbornly failed to see the futility of its nation-building efforts in Syria. Simply put, the ethnic, tribal, and religious realities on the ground, as well as the presence of regional powers Russia, Turkey, and Iran, preclude Washington’s efforts to create an American-friendly Kurdish state in the region. Rather than sustain a futile endeavor, the United States would be better off cutting its losses.

A Kurdish State is Nearly Impossible

When the Franco-British alliance successfully dismembered the Ottoman Middle East into independent states, it could not carve an independent Kurdish nation because, among other reasons, Kurds “lacked unity” and “were incompetent to cooperate towards the greater whole.” The power of intra-Kurdish tribal distrust has been so great that it has remained the biggest obstacle to establishing an independent state in the post-colonial era.

For most of the late twentieth century, the primary intra-Kurdish friction revolved around the preeminent Kurmanji-speaking Barzani tribe of Erbil and the Sorani-speaking Talabani tribe of Sulaymaniyah in Iraq. The inherent threat perception that one tribe might establish dominance over the other became more pronounced in the early 1990s, at a time when the possibility of achieving an independent Kurdish state reached its apex, after the U.S.-led coalition established a no-fly-zone (1991-2003) in Kurdish dominated northern Iraq to stave off Saddam’s retaliation. The late Jalal Talabani’s Patriotic Union of Kurdistan (PUK) and Masoud Barzani’s Kurdistan Democratic Party (KDP) engaged in a civil war (1994-1997) that resulted in the death of some 8,000 Kurds. The dreams of Kurdish unity were further bruised when the Marxist Kurdistan Workers’ Party (PKK)—Turkey’s regional arch-foe—aligned with Talabani against Barzani, (which prompted Turkey’s support for him). At the same time, Barzani struck a deal with Saddam that helped him to retake Erbil and Sulaymaniyah from PUK forces in 1996. In 2017, the intra-Kurdish rivalry later reached unprecedented levels when the PUK along with the Kurdish Gorran Movement overtly opposed the KDP’s independence referendum. Furthermore, the PKK killed Barzani’s Peshmerga forces and spread along the Iraq-Syria border in an area called Sinjar, which Barzani regarded as an existential threat. Barzani’s vow to avenge the killings of his forces was met by the Syrian Kurdish Democratic Union Party (PYD) Co-Presidency Council Member Salih Muslim’s threat that “KDP will suffer the most serious harm if it doesn’t act wisely.”

Among all this Kurdish mayhem, former U.S. Syria envoy Brett McGurk has tried unsuccessfully to unite the Syrian rival Kurdish factions PYD—the PKK’s Syrian branch—and the Kurdish National Council (ENKS), which is supported by Barzani and Turkey. The U.S.-backed PYD is known to have arrested ENKS leaders, burned ENKS offices, and prevented ENKS members from holding meetings and conferences. Despite obvious signs of insurmountable divergences in Kurdish politics, Washington has embarked on a mission that the British failed when the conditions were the ripest a century ago: creating a Kurdish state by uniting the Iraqi and Syrian Kurds.

Kurdish infighting aside, Turkey, the second largest NATO member, has made absolutely clear that it would not tolerate a prospective PYD-led Kurdish state on its doorstep by staging military incursions into Syria, effectively pushing PYD forces deeper into the Syrian desert. Moreover, as a regional economic and geopolitical behemoth, Turkey controls much of trade, raw material, and more importantly the Euphrates River, which is vital for the survival of a PYD state. As Robert S. Ford, the former U.S. ambassador to Syria (2011-2014), acknowledged that “The current U.S. approach [to Syria] lacks an achievable endgame. Without U.S. diplomatic and military cover, the YPG [PYD’s armed wing] would likely face a two or three-front war against both Turkey and the Syrian government... To prevent this outcome, while still backing Kurdish forces, the United States will have to remain in eastern Syria indefinitely.” Turkey’s Afrin operation is a testament to the fact that without U.S. support, the YPG is poised to be crushed within a matter of days. The issue of an indefinite U.S. presence was a highly disillusioning for the Trump and Biden administrations, leading to the abrupt abandonment of the Afghan National Government and its swift implosion thereafter.

ISIS Is Not America’s Problem

Having been formed as a result of the Iraqi state’s collapse in the post-2003 era, ISIS engaged in genocidal campaigns against Shi’a Muslims as well as thousands of Iraqi and Syrian Turkmen, Yezidis, Chaldeans, and Assyrians. ISIS has also killed scores of civilians in Turkey. However, the only known direct American casualties by ISIS are two journalists and two contractors. While the U.S.-led air and ground campaign (2014-2019) helped defeat ISIS, albeit killing more than 10.000 civilians in the process, Washington has justified remaining in Syria on the pretense of an ISIS resurrection; which today is unlikely given the region’s changing geopolitics. Propped up by Moscow, Syria’s Bashar al-Assad has restored his control in much of the area west of the Euphrates. Turkey has shown itself to be a military powerhouse by conducting or facilitating successful military operations in northern Iraq, Libya, Southern Caucasus, and northern Syria. By leaning on its proxies, Iran has proved that it will remain an influential military and political power across Syria and Iraq. If ISIS ever does rise again, it will be Turkey, Syria, Russia, and Iran’s problem much more so than America’s—and the region has the means to counter it.

Some in the United States and elsewhere continue to argue that a Kurdish state which runs from Sulaymaniyah in Iraq to the Mediterranean Sea can form a buffer for Israel against Iran and other possible regional threats. Yet the Kurds, particularly the United States’ Syrian Democratic Forces (SDF) partner—which is dominated by the Kurdish YPG—is reluctant to spoil the delicate balance it has struck with Iran. After speaking with the SDF’s upper echelon in Syria, Nicholas Heras, a fellow at the Center for a New American Security, said, “There is a deep concern within the SDF over the extent to which the United States is looking to use SDF forces as a counter to Iran in Syria.” In fact, when things go wrong for Syria’s Kurds, the YPG tends to run to the arms of pro-Iran Assad for its survival. In addition to its ties to the PKK, the YPG’s alignment with Assad is a primary reason why the British government has remained reluctant to lend them British support.

The PKK, the SDF and YPG’s parent organization, and Iran have a confluence of long-term interests in countering Turkey and Barzani. In the strategic town of Sinjar along the Iraq-Syria border, the PKK and Iraq’s Iran-backed Hashd as-Shabi, or Popular Mobilization Forces, have united their forces against Barzani and a possible Turkish incursion. The Sinjar Resistance Units (YBS), a Yazidi affiliate of PKK, are known to facilitate Iranian weapon transfers to Syria via Sinjar, which is of great concern for Israel.

In the Kurdistan Regional Government (KRG), the Talabani-led PUK forged, in August 2021, a formal alliance with the Iranian-backed Shia coalition called the Al-Fateh Alliance on the eve of Iraq’s elections. Iranian media widely remembered the Kurdish PUK leader Jalal Talabani upon his death as “the friend of Iran.”

One must keep in mind that at the end of the day, the United States, not Iran, is the foreigner in the Middle East. The SDF/YPG upper echelon is aware that their alliance with the United States is temporary, and they know full well that they are not going to take on Iran on behalf of Israel.