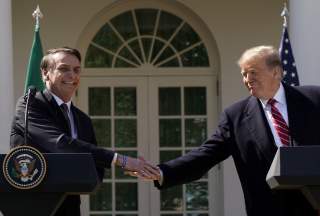 WASHINGTON— The Western Hemisphere is increasingly united, Stephen K. Bannon, President’s Trump former chief strategist, told me Tuesday. “Brazil is set to be a major strategic partner of the USA,” he said, as his ally, new-Brazilian president Jair Bolsonaro, finished romping around town.

Bannon, who still lives in the “Breitbart embassy” in Capitol Hill in Northeast, is on the move again: this time en route to another of his clients, populist Italy. But not before having fetched a bit of the limelight for himself. “Abe, Orban, Brexit, Trump, Salvini, and now Bolsonaro. The populist, nationalist sovereignty movement picks up momentum on a worldwide basis,” he tells me. “Next stop: Israel and Spain.” The Israel bit might be news to embattled Israeli prime minister Benjamin Netanyahu, who Bannon and Breitbart have backed vociferously over the years, as well as Bolsonaro, who’s embraced Netanyahu, but I suppose that’s what you get when you go all wobbly in front of the Robespierre of the Right. Maybe these are just love taps.

“Brazil is one of the most important strategic countries in the world—great people, massive resources, strong leaders,” Bannon says. “An alliance with them anchors the hemisphere and shuts down China's drive into South America.” That’s likely to draw criticism from some foreign policy realists, who say that shoring up relations in the region is all well and good, but starting a new Cold War with Beijing is misguided.

This Brazilian weekend in the United States—kicked off by the decamping of his fiery son, Eduardo, to the nation’s capital on Saturday, and capped off by an extraordinary White House press conference with Trump, and later a party at Mar A Lago, to boot—belonged to “Captain Bolsonaro,” as his adherents often refer to him. But it also represented something of a comeback party, in town, for Bannon, who a little over a year ago was officially banished from a splenetic president’s orbit. Noting their past differences, but with an eye to the future, Trump told the New York Times’ Maggie Haberman and Peter Baker in late January: “And yet Bannon, now, if you've seen him on an interview over the last six months, I think there's nobody that speaks better. It's a crazy situation.” It is 2019, and Donald Trump has finally been compelled to call a situation “crazy.”

Bolsonaro and his entourage either don’t know about the feud, or don’t care, or most likely, say those in around both the president and Bannon’s orbits (a distinction with a diminishing difference): they’ve adapted to the new detente between a president and his 2016 campaign auteur—a private event with Eduardo, officially onboard with Bannon’s “Movement” since earlier this year, was held in the lower level of Trump’s Penn Quarter hotel Saturday night. “We felt it was important to start Captain Bolsanoro's visit by honoring and giving visibility to the powerful ideas that underpinned his victory,” Bannon told me. “Eduardo is a rising star in our movement.” Bannon dined with both at the embassy (Bolsnaro’s, not Bannon’s) in downtown DC Monday.

On Tuesday, Bolsonaro played it cool. Or tried to. But the “Trump of the Tropics” (he embraces that term) is, like his namesake, prone to go off script. He couldn’t help locking in with Trump’s dismissals of immigrants, even from his home region. “The vast majority of immigrants do not have good intentions,” the Brazilian president told Fox News during his visit.

It remains to be seen if the alliance with Bolsonaro-controlled Brasilia is a thin reed. Policy-wise, the revelation of the presidential pair’s openness to an ascension to NATO was the watershed of the Brazilian sojourn to the nation’s capital. Trump’s ambivalence toward the treaty organization’s very existence appears to inspire him to treat it like an open club. If it doesn’t really matter, anyone can join. Said Trump: “I… intend to designate Brazil as a major non-NATO ally or even possibly, if you start thinking about it, maybe a NATO ally.” Neighboring Colombia, also controlled by a conservative, has also joined the bloc. “I'll have to talk to a lot of people but maybe a NATO ally, which will greatly advance security and cooperation between our countries,” the president explained.

With careening relations with London, Berlin and Paris, combined with a duff attempt at regime change in Caracas, are Trump and his apparatus pivoting to… Latin America? Bannon denies it. “Far from a pivot to South America, the president’s strategy is pretty straightforward,” Bannon says. The United States will move “where it's in America's vital national security interest,” and by the transitive property, “it will be in the vital national security interest of our allies.” Europe stays in the picture. Germany, will be convinced of “the error of their ways,” Bannon says, on reneging on the two-percent NATO defense spending commitment.

The United States will not be accused of myopia, the president’s allies insist, even as Washington reasserts the Monroe Doctrine in Latin America—with some willing help from the locals.