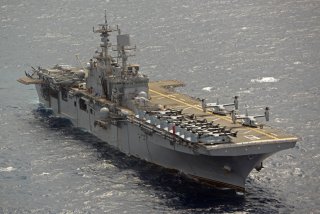 Ryan Mays, the U.S. Navy sailor accused of setting the fire that destroyed the USS Bonhomme Richard in San Diego in 2020, has been acquitted by a military judge. The question of who ignited the blaze, however, has been overshadowed by the shocking deficiencies in how Navy leadership and the Bonhomme Richard’s crew responded to the incident. Even May’s court-martial could not mask the embarrassing loss of a multibillion-dollar warship moored in her homeport of San Diego as a result of the actions, or lack thereof, of her own officers and sailors.

Even worse, however, such accidents aren’t exactly uncommon in the U.S. Navy.

Five years ago two separate collisions at sea, involving the destroyers USS Fitzgerald and USS John S. McCain, claimed the lives of seventeen sailors. Both incidents were caused by mistakes made by naval officers who lacked an understanding of maritime navigation rules and the equipment aboard their own vessels. Though the Bonhomme Richard was tied to a pier when it burned down in 2020, there have been consistent gaps in sailors’ readiness to maintain and operate warships in recent years.

In its own investigation into the Bonhomme Richard incident, the Navy identified the ultimate cause of the ship’s loss as the crew’s inability to extinguish the blaze. “In the 19 months executing the ship’s maintenance availability,” the report details, “repeated failures allowed for the accumulation of significant risk and an inadequately prepared crew, which led to an ineffective fire response.”

Among the deficiencies uncovered, the ship’s crew wasn’t properly trained to combat fires. The report cites “a pattern of failed drills, minimal crew participation, an absence of basic knowledge on firefighting in an industrial environment, and unfamiliarity on how to integrate supporting civilian firefighters.”

Now retired Vice Adm. Richard Brown, at the time the head of Naval Surface Forces and Naval Surface Force Pacific, was so alarmed by the lack of reaction from the ship’s leadership and the confusion among Navy leaders over who was responsible for the vessel, that he set up his own “ad hoc chain of command” to combat the fire. Working from his San Diego office on the morning of the fire, Brown noted that the ship’s crew and the base firefighters had squandered the window to put out the growing blaze. The Bonhomme Richard’s commanding officer, Brown further claimed, was “unsure on how to coordinate the resources that were at his disposal.”

Three years earlier, aboard the USS Fitzgerald and the USS John S. McCain, a similar sense of confusion reigned before both warships collided with cargo vessels during routine transits. On the Fitzgerald, officers on the bridge had improperly tuned their radar and failed to notice a 30,000-ton cargo ship headed directly toward them. The resulting collision flooded a berthing compartment and killed seven sailors. Two months later on the John S. McCain, a lack of understanding of the ship’s steering console and a lapse in situational awareness from officers in charge of navigation caused another collision, killing ten. Both tragedies were entirely avoidable.

Even before 2017, multiple high-profile accidents had revealed cracks in Surface Navy readiness. In 2012, the destroyer USS Porter collided with an oil tanker in the Strait of Hormuz after her captain attempted to cross a heavily trafficked shipping lane. In 2013, the minesweeper USS Guardian ran aground in the Philippines after her navigator plotted a course directly over a charter coral reef. The list goes on, as the past two decades have seen numerous groundings and collisions caused by Navy ineptitude.

What is happening to the world’s most powerful maritime force? In short, the U.S. Navy has consistently eroded the training of its own sailors, leaving their skills and knowledge to atrophy to a critical low in a single generation. This shouldn’t be news to naval leadership—they were alerted as far back as 2010, when a report on Surface Force Readiness highlighted declining training standards and initiatives, including the slashing of the six-month training course for new surface warfare officers, as well as low material readiness, reduced manning, and an increasingly convoluted chain of command. The Navy’s reports on the Fitzgerald and John S. McCain in 2017 noted similar trends as causes of the collisions.

Yet we should not despair—a clear solution lies ahead for the Navy. Rather than sink billions of dollars into untested ship designs like the disastrous littoral combat ship, the Navy should focus on the training and preparedness of its sailors. Before we can increase the size of our fleet, we must ensure our sailors are ready to operate the fleet of today and fight future wars.

Given the role that surface warfare officers play in leading sailors and driving ships at sea, we can start by reinstituting formal training pipelines to train them as mariners, engineers, and the many other specialties that make up our surface force.

The U.S. Navy can still be set on the right course should its leaders choose to listen.

Thibaut Delloue served for five years as a surface warfare officer in the US Navy. He is the author of the book The Wardroom: An Officer’s Tour at Sea and the Crisis of the US Navy and has written about the military for publications like Task & Purpose, the US Naval Institute, War on the Rocks, and The War Horse. He now works in education in Nashville, Tennessee. Learn more at thibautdelloue.com.