Build Back Britain: How Biden Can Support the Good Friday Agreement 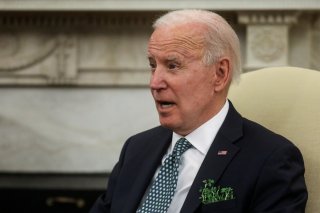 With Britain and the European Union engaged in a new attempt to settle the border on the island of Ireland, it was always unlikely that this latest round of negotiation could pass easily and without friction. Both the violence of the Troubles and the first uneasy days of peace are large in recent memory. Much still seems at stake.

This situation is not permanent, and it is uncomfortable in London, whose government believes that the way in which the protocol is being implemented carves Northern Ireland away from the rest of the United Kingdom and has proven itself unworkable in its current form.

Lord David Frost, who negotiated much of Prime Minister Boris Johnson’s Brexit deal and is now a minister, told the Conservative Party conference last week that the protocol was “not working and needs to change.” This was taken to mean that the British government was determined to tear up the agreement, whatever the cost, whatever the consequences.

Earlier this week, Jake Sullivan, President Joe Biden’s national security advisor, appeared to suggest that the United States feared a collapse of the hard-won peace, which has been brought in Northern Ireland since the Good Friday Agreement of 1998.

“Without something like the Northern Ireland protocol and with the possibility of the return of a hard border between NI and the Republic of Ireland, we will have a serious risk to stability and to the sanctity of the Good Friday Agreement,” Sullivan said to the BBC.

“That is of significant concern to the US.”

It certainly is. Peace in Northern Ireland is a major concern for American policymakers and voters. It matters especially to Biden and his White House, and to House Speaker Nancy Pelosi.

But it would be wrong to imply that if the protocol must be amended, the Good Friday Agreement is in danger, and that it is imperiled by Britain.

Although media coverage might portray Sullivan in opposition to the British government, he does not need to be. British policymakers agree with Sullivan and share America’s stated objectives. They support the Good Friday Agreement, and they will strive to get “something like the protocol” to work.

The protocol was born of a great and thorny compromise. The British government agreed to it in no small part because of its determination to protect the Good Friday Agreement, and to never again see a hard border on the island of Ireland.

Now the protocol is causing difficulties, to Britain, to Northern Ireland, and to the Republic of Ireland.

Those difficulties, in their own way, challenge the political and economic stability which supports the peace. Without amendment and change, political discord may follow economic dislocation.

Whatever the implications of rhetoric, the British government is committed to keeping the parts of the protocol which are practical and reforming the rest on lines to which everyone will, when negotiations conclude, agree.

Great common interests exist between the EU, the UK, the Irish government, and the people and political parties of Northern Ireland. They are best protected by supporting and upholding the fundamental objectives that the protocol exists to preserve.

This community of interests—with the other post-Brexit arrangements now settled—provides a strong basis on which to find more productive and sustainable arrangements to deliver more effectively on those objectives, while also addressing the political, societal, and economic difficulties that have developed since the Protocol was first negotiated.

If Britain, the EU, and the Republic of Ireland negotiate in the good faith they express, the Good Friday Agreement is not in danger. Neither is the peace in Northern Ireland. Each deserves American support to keep it so.

Dr. Azeem Ibrahim is the Director of Special Initiatives at the Newlines Institute for Strategy and Policy in Washington DC. @azeemibrahim.