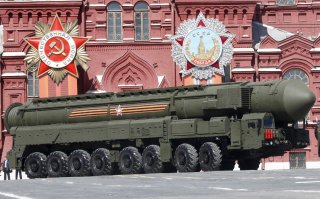 As the Biden administration completes its Nuclear Posture Review (NPR), it faces pressure to reduce the role of nuclear weapons in American national security policy. Some proponents of arms control argue that an NPR curtailing American nuclear modernization will reassure adversaries and signal American interest in negotiations. This emphasis on unilateral disarmament is misguided. If the Biden administration really hopes to reinvigorate nuclear arms control, its NPR should commit to modernizing the American arsenal as quickly as possible. The new NPR should explain how rapid American nuclear modernization will contribute to future arms control discussions by incentivizing Russian and Chinese leaders to negotiate. Only by rebuilding our own arsenal can we hope to achieve meaningful arms control in the future.

Since the end of the Cold War, the United States has enjoyed a holiday from nuclear competition. That holiday is over. Russia has spent the last decade developing newer and more lethal nuclear weapons. Soon, Russia may add new types of weapons, including intercontinental torpedoes or nuclear-powered cruise missiles. More distressingly, China has abandoned its limited nuclear posture and procured its own nuclear triad, including hundreds of new intercontinental missiles that could carry thousands of new warheads. By comparison, American nuclear modernization remains at least a decade away.

Most Americans would prefer to limit the role of nuclear weapons, but Russian and Chinese leaders do not agree. Their rapid nuclear modernization matches their revisionist ambitions to establish a new world system that is less open, less free, and less safe for anyone other than themselves. Nuclear modernization expands Russian and Chinese coercive power and challenges the credibility of American security guarantees around the world. The relative speed of Russian and Chinese nuclear expansion creates the impression that the United States is unfocused and unserious about sustaining its global security role. Modernized and expanded Russian and Chinese nuclear arsenals will hang ominously over future crises, constraining American options and further incentivizing sudden and dangerous aggressive actions.

Since Russian and Chinese leaders see nuclear weapons as critical to their strategy and status, it will take more than goodwill to limit their arsenals. We have seen this before. In the 1930s, the United States delayed in responding to Japan’s withdrawal from the naval arms limitation treaty in the hopes of reestablishing arms control. American delay instead created the window of opportunity through which Japan leapt at Pearl Harbor. In the 1960s, the United States tried open dialogue with the Soviets by announcing unilateral caps on its own nuclear forces. Rather than negotiate, Soviet leaders used American inaction to build past those limits. In the 1990s, the United States dismantled most of its shorter-range nuclear weapons, inviting Soviet and then Russian leaders to follow suit. The Russians dismantled many weapons, but to this day retain thousands of “non-strategic nuclear weapons,” which pose significant challenges to future arms reduction. Indeed, we have virtually no cases in which unilateral restraint has reassured an adversary and brought about comparable limits on the other side.

The future of great power arms control depends not on American forbearance, but American strength. This should not be surprising. Naval arms limitation in the 1920s depended critically on the American naval building programs of the early twentieth century. Strategic nuclear arms control flourished not during the unilateral restraint of the 1960s, but the renewed American nuclear modernization of the 1970s and 1980s. Indeed, the gold standard for bringing a recalcitrant partner to the arms control table remains the NATO Dual Track decision of 1979, in which the United States and its European partners committed to deploying new intermediate-range nuclear missiles while simultaneously demanding sharp limits on such weapons from the Soviets. These successes are not difficult to explain: great powers negotiate when they feel that doing so will limit the other side. Faced with unilateral disarmament, adversaries prefer to take the win without any concessions of their own. American strength may not always be sufficient for arms control success, but it is always necessary.

In drafting the new NPR, the Biden administration should keep in view this long and successful record of negotiating from strength. The new NPR should adopt a simple mantra: build nuclear capability to incentivize future arms control. Unilateral restraint will not help in a world where hostile revisionist powers seek to use nuclear weapons to rewrite the rules of the game. Under these conditions, downgrading the role of nuclear weapons in American policy would be seen by allies and adversaries alike as weakness, not goodwill. To counter revisionist coercion, reassure American allies, and create conditions for future limitations, the Biden administration’s NPR should commit to nuclear modernization, and tie that modernization to specific arms control objectives for future negotiation.

John D. Maurer is a professor at the School of Advanced Air and Space Studies (SAASS) at Air University and a nonresident fellow at the American Enterprise Institute (AEI). The views expressed are those of the author and do not reflect the official policy or position of the Air Force, Department of Defense, or the U.S. government.