Can the Abraham Accords Save U.S.-Saudi Ties? 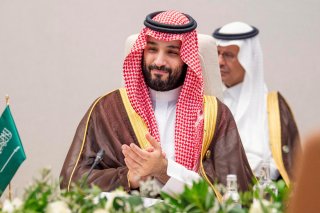 It is a surprise but not a secret to see the United States and the Kingdom of Saudi Arabia (KSA), Washington’s once crucial ally in the Arab world, continue to have a falling out in relations. Those paying attention to the slow deterioration in this nearly 100-year-old partnership all have their own opinions on who caused it, but few offer potential solutions to remedy it. However, there may be a window of opportunity for Riyadh to fall back into America’s good graces by joining the U.S.-sponsored Abraham Accords, the series of normalization agreements between Israel and multiple Arab Gulf countries.

Negotiations for the accords were mediated by the United States under the Trump administration, and President Joe Biden has expressed interest in continuing the normalization process between Israel and its Arab neighbors. Regardless of who is president, it is a fundamental American interest to further Israel’s regional integration and broader acceptance into the Middle East. Comments made by Biden in Israel underscore his interest in continuing this effort. “We will also continue building on the Abraham Accords, which I strongly support because they deepen ... Israel’s integration into the broader region and establish lasting ties for business, cooperation and tourism,” Biden said during a press conference in Jerusalem.

The U.S.-Saudi relationship, bounded by oil and security, is being challenged by changing American interests and objectives in the Middle East that do not necessarily align with Saudi expectations. Additionally, Saudi Arabia’s hotheaded crown prince (and now prime minister), Mohammad Bin Salman (MBS), has taken actions at home and abroad that have harmed U.S.-Saudi ties. Most notably, the mafia-style murder of Saudi journalist and U.S. resident Jamal Khashoggi at the Saudi consulate in Istanbul soured MBS’ image as a statesman throughout the region and the international community.

The likelihood that MBS ordered the attack is one of the many reasons why American foreign policy towards the kingdom is changing on human rights issues, which Washington has historically ignored. However, circumstances have changed, and there does not seem to be any hope that relations will be restored to a more harmonious place of mutual benefit. MBS’ ways of governing Saudi Arabia and handling international affairs regarding his country’s alliance with America don’t suggest that he is capable or willing to consider self-reflection.

Some scholars of the Middle East do not foresee the Israeli and Saudi ambassadors shaking hands but believe they will strengthen ties where common interests take precedence. This does not mean, however, that the Saudis will oppose any improvement of ties or an informal relationship with Israel, which can be traced back to the first Gulf War. However, this policy may be altered once MBS ascends to the throne.

Despite tensions between Saudi Arabia and the United States, it will be a win-win for the United States if MBS decides to make a dramatic show of statesmanship and join the accords. There are three key reasons why such a move would be savvy for MBS.

First, the region changed dramatically in the aftermath of the Arab Spring. Power dynamics have shifted, and America’s slow withdrawal from the Middle East has allowed Russia, Iran, and China to fill economic and security vacuums throughout the region. These new dynamics have limited Washington’s influence in the region it has played such a big hand in shaping over the last fifty years. But Saudi Arabia joining the Abraham accords would be a diplomatic win for the United States, demonstrating that it can still shape the politics of the Middle East and elsewhere.

Second, the rise of a global arc of authoritarian countries has given Saudi Arabia much more flexibility to act in its interests and dismiss concerns about its human rights record. The 2022 U.S. National Security Strategy states that the United States will forgo democracy promotion and instead work with non-democratic states to contain Iran, China, or Russia. That means that geopolitics and realpolitik are back.

The common factor uniting Tel Aviv and Riyadh is the fear of Iran’s growing power in the Middle East and the risk it poses to regional stability. If Saudi Arabia signs the Abraham Accords, Israel’s security will be bolstered, normalization will create new economic opportunities, and the United States can maintain a more benevolent and financially-focused role in the Middle East, moving away from its traditional military-dominated posture. Importantly, as containing Iranian influence in the region is a priority for Israel and Saudi Arabia, the accords have created an opportunity for more vital and sustained military collaboration between the two countries.

This new anti-Iran axis could serve as a substantial bulwark against further Iranian influence and nuclear enrichment activities in the broader Middle East. Such an axis would create a more robust security framework for the Gulf countries to contain Iranian influence, realign the regional balance of power to something similar to its pre-Arab Spring alignment, and allow the United States to potentially reduce its presence in the region.

Lastly, if Saudi Arabia joined the Abraham Accords, there would be one less issue for the United States in the Middle East and Washington would have an opportunity for a strategic rethink. The United States has stretched itself across the world over the last few decades, which has brought growing domestic and political costs. Other allies have slowly withdrawn from the Middle East, and Biden will likely do the same to prioritize strategic competition with China.

Bolstering Israel’s security in the region provides breathing room, both financially and militarily, for the United States to focus on other critical issues, including the growing authoritarianism of its NATO partner Turkey, rising Chinese influence in the wider Middle East, and challenges in the Indo-Pacific.

Benjamin Netanyahu, who will soon be Israel’s prime minister once again, may want to continue the normalization process. Netanyahu was the first Israeli leader to sign the Abraham Accords, and the geopolitical conditions in the region make further normalization possible. Simultaneously, the Saudi crown prince sees Israel as a “potential ally, not an enemy.”

MBS recognizes the benefits of normalizing relations with Israel. However, such a decision comes with domestic risks, the biggest of which is the Palestinian issue. Saudi Arabia has made clear for years that it won’t join the Abraham Accords without progress on a peace deal between Israel and the Palestinian authorities. Saudi Arabia established the Arab Peace Initiative in 2002, which revealed the Arab world’s willingness to formally recognize the state of Israel alongside a Palestinian state based on the 1967 borders.

This has not happened. Instead, with Israel’s continued occupation and settlement expansion deep within the Palestinian territories, the chances of a two-state solution are slim. Above all, many Arab states have failed to live up to the words of the Arab Peace Initiative by making peace with Israel, as shown by the Abraham Accords. Still, normalization with Israel would probably make MBS a “traitor” in the eyes of the Palestinians, who remain stateless.

More recently, the Saudis have become more pronounced in their criticism of the Palestinian leaders, but they have not abandoned the idea of a two-state solution. As the accords successfully decoupled the Israel-Palestinian issue from broader normalization efforts, they are starting to lose their luster in the Arab world as violence between Israelis and Palestinians escalates. It might be realpolitik for MBS to divorce the Palestinian issue and the two-state solution from broader normalization efforts by joining the accords, but at what cost? Still, as violence and more severe policies toward Palestinians will increase under the possible Netanyahu-Smotrich-Ben Gvir coalition, normalization will be a very tough sell to the Saudi public, which is already not on board with the idea.

Saudi Arabia is no ordinary country, and MBS’ rule is not secure. As a result, the crown prince must gauge where the winds of regime stability are heading. Increased tensions over the Israel-Palestine issue also raise another specter that, if left unchecked, could challenge MBS’ hold on power. Extremist groups could latch onto Israeli-Saudi reconciliation and foment instability within the larger region, leaving MBS in a vulnerable position domestically. Moreover, the Saudi public’s grievances over normalization could be taken advantage of by extremists. Increased terrorist activity and public dissent would scare away Western and Chinese investors, which MBS needs to create a diversified economy and maintain economic legitimacy. But as the Khashoggi affair made clear, under MBS’ regime, domestic dissent will not be tolerated, and regime maintenance will be carried out no matter the costs. This could pose more challenges for Saudi Arabia’s effort to recreate its image in the world.

This helps explain why Saudi Arabia is more hesitant than others to join the Abraham Accords. Although such a move by a Saudi leader would have the same magnitude as the late Egyptian leader Anwar Sadat's signing of the Camp David Accords with Israel, MBS is well aware that reconciliation with Israel also led to his assassination in 1981.

The question that must be asked is whether MBS is willing to sacrifice domestic legitimacy by signing the accords and ignoring the Palestinian issue. MBS needs to maintain domestic support to decouple the Saudi economy from its dependence on oil and build his ambitious pet projects, such as NEOM, in exchange for international legitimacy. This approach is a quick fix to clean up his dismal record as a statesman and create a suitable environment for international economic investment. The ball is in MBS’ court. He will have to choose which is more important. Will he opt for an alliance that recognizes Israel, absent a homeland for the Palestinian people, but offers Saudi Arabia a stronger position to counter Iran while improving ties with the United States? Or will MBS hold onto the old policy of no formal ties with Israel until a country called Palestine is on the map with East Jerusalem as its capital? The world will simply have to wait and see.