Can Donald Trump Save His Presidency By Making China the Enemy? 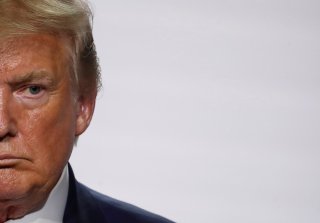 To “wag the dog” is “to distract attention away from a political scandal, often through military action.” President Bill Clinton was accused of wagging the dog in 1998 when he ordered strikes on Afghanistan and Sudan while embroiled in a sex scandal at home. President Donald Trump was charged with wagging the dog when he authorized the assassination of Iranian Maj. Gen. Qassim Suleimani during his impeachment hearing. He seems to have found a more effective way to distract the attention of his mishandling of the pandemic and the economy—an almost daily anti-Chinese drum roll. However, the effects are not quite what Trump seems to hope for.

Since March, Trump has repeatedly blamed China for not containing the pandemic. In May, Trump claimed to have seen evidence the infectious disease could be traced to a lab in Wuhan, a conspiracy theory that was later debunked. He has tried to relabel the coronavirus as the “Chinese virus,” the “Wuhan virus,” and the “kung flu.”

On July 7, FBI Director Christopher Wray stated that “China is engaged in a whole-of-state effort to become the world’s only superpower by any means necessary.” He added that the FBI conducts so much Chinese counterintelligence that it starts a new investigation “about every ten hours.” One wonders if the FBI had been negligent so far and is now racing to catch up;  if China has suddenly increased its espionage by several orders of magnitude—or if the FBI is inflating this count by including as cases of suspected espionage the investigations of grants China makes to American universities to burnish its name and of published papers American scholars email to their Chinese colleagues?

On July 21, the Trump administration “abruptly ordered China to close its consulate in Houston, accusing diplomats of aiding economic espionage and the attempted theft of scientific research.” The State Department alleges that China was using the consulate for “massive illegal spying and influence operations.” Author Geoff Colvin has pointed out that the State Department has claimed that these violations have been going on for years, leaving him to wonder, “why close the consulate at that moment?” He answers his own question by noting that “virtually all analysts say the timing reflects the presidential election, as President Trump and former Vice President Joe Biden vie to appear the tougher man on China. Certainly this was not routine diplomacy theater. It was unprecedented. In the 41 years of formal relations between the two countries, the U.S. had never ordered the closure of a Chinese diplomatic facility.”

In a speech on July 23, Secretary of State Mike Pompeo stated,  “If we don’t act now, ultimately the CCP will erode our freedoms and subvert the rules-based order that our societies have worked so hard to build. If we bend the knee now, our children’s children may be at the mercy of the Chinese Communist Party, whose actions are the primary challenge today in the free world.” He further claimed that this is “a complex new challenge that we’ve never faced before. The USSR was closed off from the free world. Communist China is already within our borders.” He provided no particulars to explain why he is so alarmed.

On August 6, Trump moved to ban the app TikTok, owned by the Chinese company ByteDance. The New York Times reports that, while the prohibition is couched in language about security, Trump holds personal grudges against TikTok, as he is “angry at viral TikTok videos that mock him and at the app’s role in deterring attendance at his rally in June in Tulsa.”

On August 9, National Security Adviser Robert O’Brien asserted that China is interfering in the 2020 election, breaking into the United States’ cyberinfrastructure with the goal of hurting Trump. He said, “China, like Russia, like Iran—they’ve engaged in cyberattacks and phishing and that sort of thing with respect to our election infrastructure, with respect to websites.” Other officials contradicted O’Brien’s claims, saying there is no intelligence that supports the idea that China is seeking to hack election systems.

On August 10, Secretary of Health and Human Services Alex Azar was in Taiwan meeting with Taiwanese President Tsai Ing-wen about the coronavirus. This interaction made Azar “the highest-ranking U.S. official to meet with Taiwan’s president in four decades,” a move known to annoy China.

The anti-Chinese drumroll has an effect. Often the evening news now leads with the latest bruhaha about China rather than with news about the latest wave of the coronavirus.

Americans are increasingly seeing China in a negative light. This summer, Pew Research Center found that 73 percent of adults in the United States view China unfavorably—a high statistic for a nation in which the public is divided sharply on most issues. The figure represents a seven-point increase in unfavorable perceptions of China since March of this year, and a dramatic twenty-six-point increase since 2018. It is the most negative result that Pew has recorded in fifteen years of polling on this topic.

Trump has found a way to capture the headlines and fuel criticism of China, which China inflamed through its brutal crackdown in Hong Kong. However, so far at least, this effort at wagging the dog has not improved Trump’s reelection chances. Biden continues, so far, to maintain a substantial lead. Stay tuned.

Amitai Etzioni is a University Professor and professor of international affairs at The George Washington University. He is the author of many books, including Avoiding War with China.