Can the European Union Save the Dayton Accords? 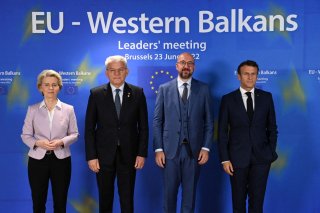 As soon as the polls closed in Bosnia and Herzegovina (BiH) on October 2, its chief international officer, High Representative (HR) Christian Schmidt, decreed a “functionality” reform package that imposed limited electoral and constitutional changes. Schmidt intervened after the protracted negotiations on electoral reform had reached an impasse, reflecting the most serious crisis BiH has faced in its post-war period. To break the deadlock, HR Schmidt took limited action to prevent the likely ejection of Croats from the government and the ensuing dysfunctionality in the Bosniak-Croat Federation (FBiH), one of the two entities making up the BiH state with the other entity being the Serb-dominated Republika Srpska (RS). The two entities were set up by the U.S.-sponsored Dayton Peace Agreement, marking the end of the atrocious BiH war (1992-1995). Anxious about the future of the Dayton Accords, the U.S. embassy immediately issued a statement supporting HR Schmidt’s actions. However, Schmidt’s intervention generated fierce opposition in Sarajevo and beyond, leading to threats against his life and bitter criticism of the United States.

With the 2013 official census confirming that Bosniaks—formerly “Bosnian Muslims”—had become BiH’s majority, Sarajevo’s politicians began demanding an end to the tripartite division of power established by the Dayton Accords in 1995. If they constitute more than 50 percent of the BiH population, Bosniaks wonder why they should continue to share power with Serbs (31 percent) and Croats (15 percent) equally. According to Bosniaks and non-ethnically defined Bosnians—both groups referred to here as Bosniaks or political Sarajevo for their shared opposition to Dayton—the only just and democratic solution is a unitary state controlled by the majority of its citizens, the “civic state.”

Bosniaks’ disappointment that decades after the end of the war, BiH remains a dysfunctional and ethnically divided state is understandable. However, the system can hardly be called “apartheid” when the Bosniak majority controls the FBiH’s executive and its lower chamber legislative. The equal ethnic power-sharing with Croats (and Serbs) in accordance with the BiH’s Dayton Constitution applies to the FBiH’s upper chamber, the Federation House of Peoples (FHoP). Representing Bosniaks, Serbs, and Croats by parity regardless of their respective minority or majority status in the society, the upper chamber gives Croats influence over legislation passed by the Bosniak-controlled lower chamber. In most federal systems, including that of the United States, different constituencies can carry different weights in the upper chamber of a bicameral legislature.

Exploiting various loopholes, some created through the imposed constitutional amendments, Bosniaks keep electing into the FHoP and the BiH Presidency more Croat officials on the pro-Sarajevo political platform, thereby impairing the power-sharing arrangement under Dayton. Consequently, in its 2016 Ljubic verdict, the BiH Constitutional Court found that the BiH election law was unconstitutional and affirmed the rights of Croats to elect their own political representatives—equally with Bosniaks and Serbs—into institutions designed around ethnic power-sharing, such as the FHoP.

As evident from a 2018 hearing before the U.S. House Foreign Affairs subcommittee, the United States worried that the non-implementation of Ljubic would produce a major post-election crisis. After the 2018 general elections, Bosniaks continued blocking the implementation of Ljubic and Croats responded with obstructions in FBiH institutions. The extensive mediation efforts by the United States and European Union did not bring about a resolution. BiH did not amend its unconstitutional discriminatory election law while the FBiH executive has operated in a technical mandate since 2018. The relationship between Bosniaks and Croats is at its lowest point since the end of the war.

Moreover, before the October 2 elections, Bosniak leaders openly shared their schemes to seize control of the FHoP, eject the legitimate Croat representatives from the post-election governance, and change the FBiH constitution to support majoritarian rule. However, because they reject the “broken” Dayton Constitution, Bosniaks do not see their plans as a constitutional coup against the Dayton power-sharing or as an action bound to alienate Croats and Serbs. Instead, Bosniaks claim that the denial of Dayton is necessary to democratize BiH and create a more unified, functional state.

To prevent the unraveling of the Dayton Accords, HR Schmidt imposed the functionality package at the end of election day. Schmidt’s limited intervention did not overturn the 2022 direct election results but redistributed mandates for the indirectly elected upper chamber. Additionally, Schmidt changed the rules for appointing the FBiH executive, hoping to thwart the Bosniak plans for ejecting legitimate Croat representatives from the post-election government, while also curtailing the veto powers to prevent Croat obstructions in FBiH institutions. Since Schmidt’s measures are limited, the BiH parties will still need to negotiate the comprehensive election and constitutional reforms in order to implement, as urged by the European Parliament, the Ljubic verdict to guarantee the equality of Croats with Bosniaks and Serbs, and the European Court of Human Rights (ECHR) decisions (e.g., Sejdic-Finci) to integrate minorities into the BiH electoral system.

Since they believe Dayton is an obstacle to democratization, EU progressives rejected Schmidt’s intervention in support of Dayton. Previously, Germany’s Greens and Social Democrats sponsored the Bundestag resolution that repudiated the Dayton power-sharing format.

On the other hand, concerned about BiH’s stability, the U.S. State Department supports the Dayton format: one BiH state with two entities and power-sharing with three constituent peoples (Bosniaks, Croats, and Serbs). While activists urge the deployment of several thousand NATO troops, the State Department affirmed that there will be no war in BiH and believes the civic state discussions should wait until BiH joins the EU. As scholar Robert M. Hayden explained in The National Interest, it is hard to “imagine a better way to destabilize” BiH than helping Bosniaks impose a centralized government on Serbs and Croats. The United States has not shown interest in “Fixing Dayton,” thereby disappointing Bosnian Americans, who voted for President Joe Biden.

The United States worries that the Russia-aligned, independence-minded Republika Srpska could exploit the chaos of a Bosniak take of FBiH institutions, and Croats would respond with boycotts and self-rule. Moreover, concerned over the dwindling Croat community in BiH, Croatia fears that BiH might end up divided between Serbs and Bosniaks. Such a scenario would leave NATO and EU member Croatia with a security problem on its borders, now making the EU’s longest external land border affected by irregular migration and trafficking. Hence, the United States urged electoral and constitutional reforms that would implement both Ljubic and the ECHR decisions to amend the unconstitutional election law, hoping to repair the rift between Bosniaks and Croats to make the FBiH more functional and thereby contain Republika Srpska, too. When these diplomatic efforts failed, the Biden administration supported the intervention of HR Schmidt, whose office depends on U.S. financial and political support.

To be sure, imposing legislation upon BiH is incompatible with its sovereignty and the objective of EU membership. Hence, EU officials think the Bonn powers should be “a measure of last resort.” However, the United States affirmed that the hazardous deadlock in the FBiH warranted the “urgent and necessary” use of the Bonn powers. Just a week before the elections, the International Crisis Group urged HR Schmidt to act.

Nevertheless, the measures intended to protect the Dayton peace may unintentionally strengthen Sarajevo’s resistance to the accords and further destabilize BiH. Some circles in Sarajevo and their supporters abroad have already denounced Schmidt’s reforms as “Nazism,” having castigated the United States for supporting “ethnic oligarchy” rather than “integration.” Schmidt’s “illiberal” intervention favors Croats and the HDZ-BiH party, so claim the critics, accusing the United States of destabilizing BiH by promoting electoral reform which some characterize as the “three-fifths compromise.”

The State Department rejected these accusations. HR Schmidt acted in accordance with his mandate to protect Dayton after years of failed negotiations and dysfunctionality in the FBiH, while the U.S.-E.U.-sponsored electoral reform focused on implementing the relevant court decisions of the BiH Constitutional Court and the ECtHR.

On November 2, the United Nations Security Council (UNSC) renewed the EUFOR peacekeeping mission for another year. In his blog, the U.S. ambassador to BiH, Michael Murphy, reiterated U.S. support for HR Schmidt while noting America’s growing concerns over attacks against Dayton and HR Schmidt. The harshest criticisms of the West now are not voiced by Serbs but by Bosniaks, especially by the supporters of the SDA and DF political parties and Zeljko Komsic, the titular Croat member of the BiH Presidency elected by the Bosniak electorate. Moreover, some public intellectuals and social media influencers with ties to the West are highly critical of both HR Schmidt and the United States, as evidenced by a recent event at Columbia University.

The UNSC meetings on BiH are usually marked by tension between the West and Russia. In contrast to the United States, Moscow supports the Serbs, rejects HR Schmidt’s legitimacy, and insists that BiH no longer needs his involvement. Hence, while HR Schmidt can submit his reports to the UNSC, he is not permitted to address the body due to opposition from Russia and China.